"This facility has a track record of violating the Clean Air Act."

Capitalism at work in a labor-surplus world. Generally, owners and management don’t care if our work harms or kills us. We are replaceable, and at a lower cost than protecting us from harm or death. 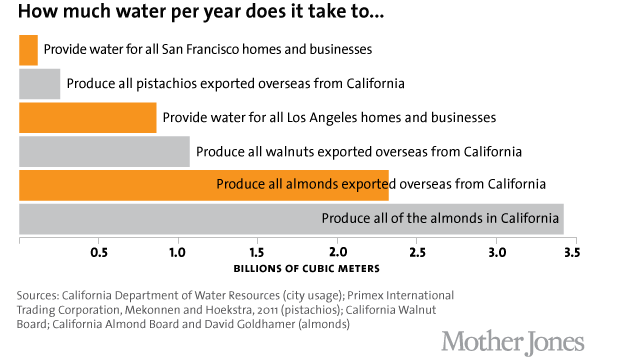 I agree that almond growing is probably a wasteful use of water, but that’s kind of a misleading chart. It doesn’t discuss geography (does it really make sense to send the water an extra 400 miles through concrete-lined aqueducts to LA?) or the water impact of other types of industry and agriculture. Water use in California is a weird, complicated, historically, geographically, politically and environmentally fraught issue.

Almonds aren’t just empty calories either. Their comparison to other crops should take calories into consideration. It’s a rather… complicated process for these sort of calculations.

And as much as I agree that the world would go on without almonds or walnuts or pistachios, those growers and the industries around them provide one hell of a lot of jobs, and not just minimum wage farm labor jobs.

Yeah, I don’t really care, it’s just one of those things where once you learn almonds use trillions of gallons of water a year in California your mind kind of glazes over.

So the idea of millions of liters being a big deal makes my brain just snort, though the context might be different.

And as much as I agree that the world would go on without almonds or walnuts or pistachios, those growers and the industries around them provide one hell of a lot of jobs, and not just minimum wage farm labor jobs.

Per the growers themselves, it’s about 21k direct jobs. That doesn’t seem like a lot, and there is little reason to believe the number would be different if they were growing something else.

Yes, their report goes on to cite other jobs, but those numbers are pure speculation or even totally unrelated to the actual product, e.g.

According to a new study from the University of California Agricultural Issues Center (AIC), the almond industry supports California's economic well-being by generating more than 100,000 jobs and more than $21 billion gross revenue across all...

If they grew anything at all there would be these sorts of knock-on effects. Almonds are California’s third-biggest agricultural product (after dairy products and grapes) and that strikes me as a bit weird; who actually includes almonds as a substantial part of their diet? They grow them because it is a profitable cash crop, and it is a profitable cash crop because they’re stealing everyone else’s water.

Almonds are California’s third-biggest agricultural product (after dairy products and grapes) and that strikes me as a bit weird; who actually includes almonds as a substantial part of their diet?

Several years ago almonds and walnuts suddenly became big money crops. Pistachios became big when Iran took over the American Embassy. We embargoed Iranian pistachios and California planted millions of trees. Almonds in the last 10 years or so became huge based on exports, and now maybe uses like almond “milk”. My in-laws grew walnuts and lost money most years, and then China fell in love with walnuts. Now it is a huge cash crop.

Farmers, corporate farmers at least, grow what sells. I have seen tree crops come and go here based on world markets. Pistachios, plums, almonds, all went from small amounts to large quantities to different varieties almost over night. My brothers plums became worthless when the markets changed. In many areas cotton was replaced by nut trees, both heavy water users.

@scottagibson, you say 21k jobs yet your Dec 14 items says 100k jobs, just for almonds. Quite a difference.

The almond industry as a whole, including processing and marketing, generates about 104,000 jobs statewide.

Three quarters of those jobs are outside the almond industry - jobs that follow almonds off the farm and outside of the processing plant as a result of the business that almond industry members do with other companies and money they spend in their communities.

Almond growing is responsible for about 21,000 direct farm jobs.

It is the indirect jobs people forget about. The tractors and heavy equipment, the stores that depend on the direct farm labor, in fact the lives of whole towns that depend on ag.

How many of those jobs would just change to whatever crop was being grown?

Here in Iowa if you stop growing, say soybeans, odds are you’re going to grow corn instead. So while some of the logistical side is soybean-specific, much of it would just do the same stuff only with corn in a lot of cases.

The legacy water rights also make that inefficient. How many of those jobs (21k direct plus indirect) would be used on a substitute crop. The jobs analysis is worthless without that.

How many of those jobs would just change to whatever crop was being grown?

Could be a lot or almost none. The way various crops are harvested and processed changes dramatically based on what they are. So the answer is, we don’t know until we know what crop replaces them.

Like I mentioned before though, almonds are energy rich; they’re not empty calories. The very high water usage isn’t as high if you compare the water use to caloric gain.

Most nut crops are machine harvested, so the jobs aren’t just at harvest time.

What crop would replace nut crops and make good profits while employing good numbers of people? You also need to remember that those profits (well, some of them, but you at least need to make money to have it) go back into the communities.

Most nut crops are machine harvested, so the jobs aren’t just at harvest time.

Which is why I said…

Well some crops can be hand picked and machine processed.

Well my main point is, there is no real way of knowing how much of the current resources or labor force could shift to a new crop without knowing what the new crop would be. The harvest, process, to the shelf or industrial process for each crop can be quite different from one to another.