Destiny 2 - I don't have time to explain Bungie's MMO shooter 2.0

If you give developers more hardware resources they will find a way to use it up and not all of the time in the most resourceful way.

Makes me miss the days of himem.sys, or the AMiGA / demoscene when developers talked with the hardware instead of having 40 layers of abstraction adding bloat in addition to pulling down nupack files from a nuget repository of 1000 pieces of code they have no idea what contains and gladly update each time they fire up VS, only that is has a function they’d rather use instead of writing their own.

Anyway, still at 39/40 on Mars… this supposed fix doesn’t seem to have “fixed” things… or maybe I need to do the other 39 -again- before I’ll get the missing location.

Makes me miss the days of himem.sys, or the AMiGA / demoscene when developers talked with the hardware instead of having 40 layers of abstraction

You wouldn’t have the games we have today if you did because that takes an enormous amount of developer time not being spent on gameplay systems, AI, physics, lightning systems, etc. Do you also miss all the system crashes, hard locks, file system corruptions, and everything else that comes with direct access to the metal just to shave some CPU cycles and some RAM?

Not to say games shouldn’t be optimized and run well but I really prefer developers focus on game systems and big picture stuff, not shuffling data around CPU registers and writing directly to the metal on all 800,000 combinations of CPUs, GPUs, hard disks, SSDs, network cards, etc.

RAM is cheap, use it. Within reason, of course. :)

Impression is that in many cases they do neither, slap some DRM bullshit on it, and press “Make available for purchase”.

Got to 1010 in under a week, now creeping power level up and trying to get exotics that are going away

As a brand new player, can anyone tell me how to decide umbral engrams? I have 8, and no clue how to get the Drifter the decide ability.

People online talk about a quest string, but I haven’t seen the quest anywhere.

As a brand new player, can anyone tell me how to decide umbral engrams?

As a returning player … I have no idea. I ended up with several and couldn’t find anybody who could help me with them. Googling said there’s supposed to some device that you help the Drifter construct I think, but damned if I know how to get that going.

And I think I’m done, once again, with Destiny 2. Starting back in, at first it felt really good. The movement and shooting are always pretty satisfying - it’s Bungie, after all. But after a few missions it started to feel like the old grind again, even though these missions were new to me they were very much the same old thing, and I just don’t think I can start this grind up again. There’s other stuff I’d rather play. It’s been fun Destiny! Mostly.

It’s been a while, but believe this quest chain unlocks the prismatic recaster which then let’s you decide umbral engrams near the Drifter. 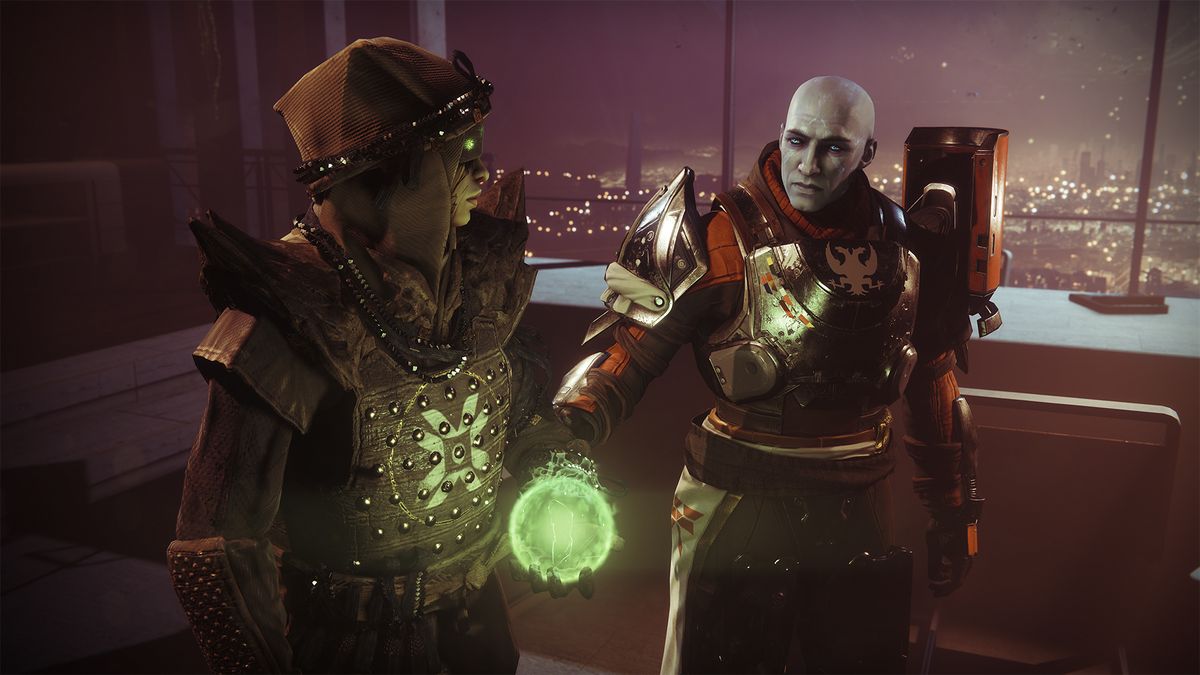 Here's what you should know about Umbral Engrams in Destiny 2

Get back to the daily grind for more new gear.

So, I just realized I have the Seeds of Silver Wings… But I can’t find this public event on Io or Titan that I’m supposed to participate in. I waited around for 30 minutes and nothing happened.

I played Destiny 1 (no expansions) and enjoyed it before I got frustrated with the grind. As a new player for Destiny 2, the utter confusion of the whole thing has me about ready to hang it up. Tons of different rep, different currencies, tons of faceless weapons, a confusing power system and a story that makes zero sense to me right now. Makes me want to go back to Warframe.

But the environments and gunplay are just so good! I want to sink 30 or 40 hours into this… But the systems are just so unforgiving to a new player.

The Contact public event is on Titan this week in the same zone as the vendor (Sloane). It cycles every 15 minutes or so so you really can’t miss it. And yeah if you follow the questline you should get access to the umbral decoder.

Weekly reset is in 12 hours or so and after reset the event will be back on Io. You can see which zone its in by its icon on the map.

Thanks - I will check out Io today… and somehow I was able to miss it - i never saw (or didn’t know I guess) what the icon looked like.

I do appreciate the insight here, so thank you.

I started as a New Light / F2P player in early August, but that’s still enough time to be considered “a while ago” for me. As I recall, I think Contact is meant for like power level 1000+ but as long as you “joined the event” and participated enough to loot the chest at the end, it should count as completed. I took my 750 character and just ran around to collect and deposit motes into the bank while taking occasional potshots at mobs, and let the other players make the actual kills since I was barely hurting anyone.

I’m not really interested in D2 at the moment, but let’s assume I was and that I’d like to see the expansion when it drops in November, including the content of the season.

Is there someone who considers this an acceptable option when I have a much more appealing alternative?

I could spend $1 for the first month of the Xbox pass. This includes the expansion. So by spending $11 I can have both the expansion and the pass.

A month is of course way more than enough to see the content, but D2 is also a game you play as an hobby. But lets even assume the impossible, and that the game is suddenly so great that I want to play it more than one month… Isn’t it still better to spend another $10, next month, rather than $50 all at once?

The same happened today. There was the complete edition of Assassin’s Creed Odyssey for about $20. The Ubisoft pass is $15. Still… the Ubisoft pass gives EVERYTHING. All AC games, all Far Crys, The Division 2 including its expansion (I have it installed, and it is shit compared to D1, but I don’t own the expansion), and Watchdogs and so on. All these games include all their DLCs.

So, let’s say this month I really want to play Assassin’s Creed. So I spend $15. Next month I want to play D2, so I get the Xbox pass. In the meantime, Odyssey is a long game so I won’t be done in this month. Well, coming December I drop Xbox and pick back up Ubisoft… If I plan to spend HOURS into a game for this month, then it’s worth that monthly price. Even if I really love a game and want to play for months and months… it’s still better to pay $10 or $15, than everything upfront.

And that’s for a discounted game, because if I wanted to play a recent one, $80 for a complete edition?

No, there’s no compelling reason to ‘buy’ stuff any more in this scenario.

Doubly so for something SaaS-ey like D2 which, even if you pay full whack does not guarantee you’ll be able to play it in future (when they decide server costs aren’t worth it any more and turn them off).

Triply so for Bungie and their clueless thrashing about removing swathes of content from the base game.

1500 hrs + in Destiny 2, Still haven’t purchased the next Expansion, and then buying Season Pass extra I suppose…

That’s why they are doing it. They know the majority of customers are PC and PS4, and that’s where they reap their money.

I don’t think they’ll get anything from me, though.

Fuck this Phylaks fight. Stupid game putting him in when you are seriously underlevelled…

Got a duo, that was a LOT easier.

I hate that guy now. I got murdered a bunch when he was first introduced and murdered a million times when we eventually fought to the death. Both fights are in tight spaces with lots of spawns that love melee. Had to really juggle around my weapons to find a combo that got me through those.

I was about to give up when I posted to fireteams and got someone else at the same spot. I was able to solo Praksis tho. Was a sweaty fight…

I started up again on the xBox when it came on GamePass and basically was catching up (finished up a lot of the Osiris/Warmind stuff and then was doing Forsaken stuff before the planets disappeared. Gambit is pretty fun too - but I haven’t ventured back into the Crucible or done any Raids yet (can’t find my xbox headset, and a headphone jack accessory doesn’t seem as good).

Did the intro stuff for Beyond Light which was pretty cool, and then went back to Shadowkeep to get up to the Beyond Light recommended Light Level, but had a fun time on Europa during the Intro.

The Shadowkeep stuff has been pretty cool in bringing back the Nightmares of old Destiny 1 battles. It also reminds me that the Destiny 1 fights/events/strikes were so much more rewarding from a gameplay perspective than D2. In D2, it still doesn’t quite feel as good (from a memorable/fun perspective) as D1 did. Can’t quite put my finger on why.

Weirdly, none of my activities pre-beyond light went to the old OO Clan, wasn’t sure if it was xBox only, but it looks like it may be working since the new expansion.