Oh man, some dlc would be great.

You think they’re going to add more story content with Dante and Virgil fighting their way out and maybe Nero doing his own thing to help them from outside? Maybe Lady or Trish playable again? Or you think they’re gonna save that stuff for DMC6 and just do a multiplayer horde mode or something?

Well, they did leave all those options open, so who knows. ;)

They almost certainly won’t do the first one. I doubt they’d do that in a sequel either – even though I’d love it. That’s one of those “outside the boundaries” stories that are usually left to the imagination in most media. I’m sure TV Tropes has a term for this.

Multiplayer Bloody Palace is the most reliable rumor right now. I hope sales are good enough to get them to put more DLC out there after they take a vacation. Capcom does expansions sometimes so we can hope for that too.

I don’t think @tomchick ever found out last night on his stream what auto mode is.

Jackpot! Bloody Palace is coming to #DMC5 as a Free Update on April 1st! Are you ready? 😈 https://t.co/ko02NQzOvY

That means 9 days to enjoy Sekiro before it’s back to DMC 5 for the summer!

I don’t think @tomchick ever found out last night on his stream what auto mode is.

I did not! Do tell. Someone probably explained it to me in chat, but I missed it because I was busy futzing around with my various robot arms.

It does cool combos for you automatically by just pressing the attack button. It’s designed to show you what’s possible, to encourage you to learn them. If you do a command move (like lock-on forward Y) it won’t override it. That way you slowly build up your repertoire.

It doesn’t dodge for you either. You seemed to be doing that pretty well!

How to be a badass as V: https://streamable.com/83mjd (mission 14 spoilers)

FYI if you press the pause button during multiplayer, you’ll be disconnected. Resist the urge!

You’ll know if you’re in multiplayer if you see the little diamond icon next to their name. If it’s not there, like on some of the split levels, then I think it’s ghost data. And just for the record if any lurkers are reading this, The DMC Crew is ghost data for when you can’t connect to Capcom’s network.

Wow, I never knew you could parry with V’s cane! Gotta experiment with that later.

On the subject of badasses, here’s a cool Dante combo in training mode. Some minor spoilers as far as weapons Dante picks up through the game but that’s all.

And here’s Dante’s level of badass.

Stole this one from reddit. Most of what’s posted to reddit is “cursed” model swaps, as the kids would say. Here’s a fun one though: https://www.youtube.com/watch?v=Dg71MHke4sw

Huh. I barely use Royal Guard. I should use it more. 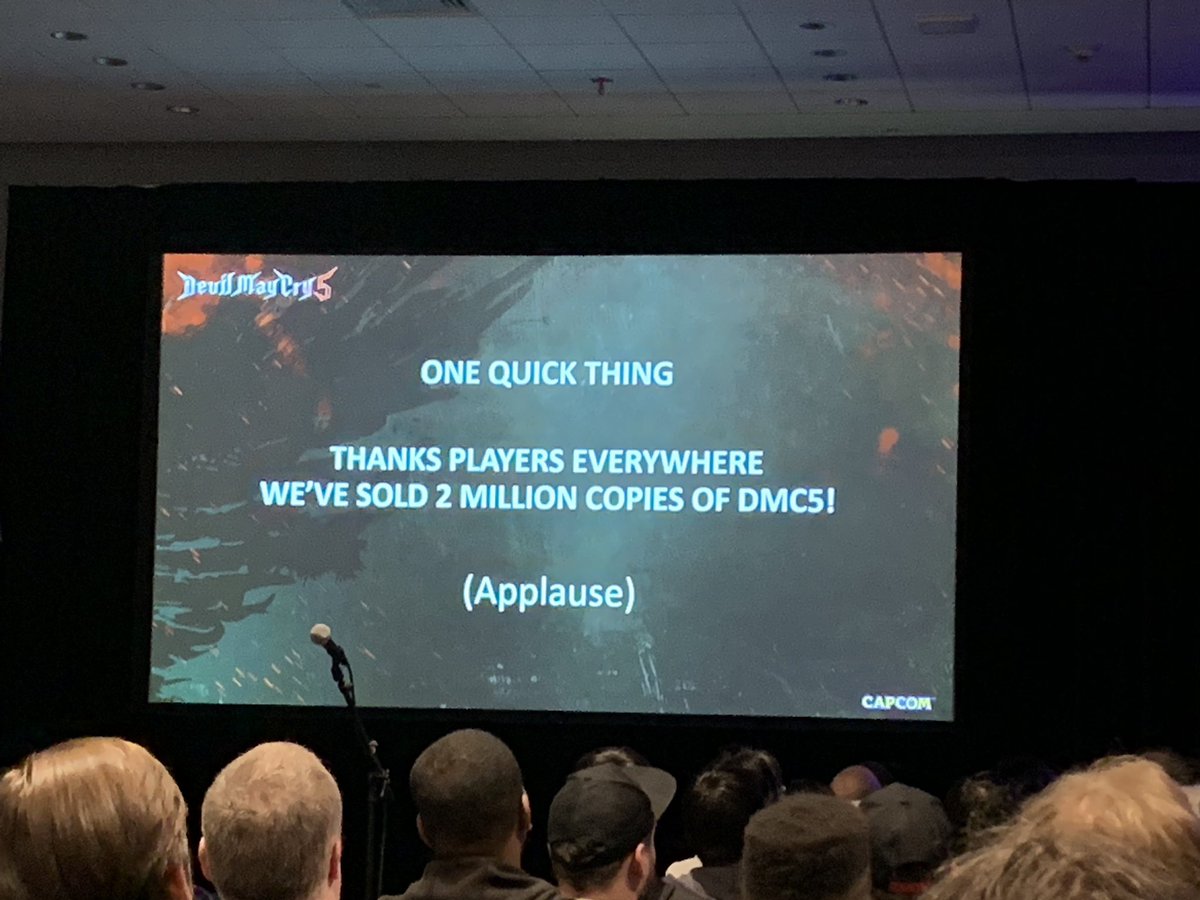 2 million in sales. Not bad. It had higher peak players than RE2, but I highly suspected it wouldn’t hit the same sales numbers (3 million in 3 days).

Comparison sales numbers are in the 2018 Capcom report, except for DmC which seems to be a secret. DMC 4 sold 3 million total (which likely includes the recent special edition based on other sources).

The new Bloody Palace update is out and there’s no co-op mode. That’s really disappointing.

Oh well, time to play the heck out of it.

[EDIT] I mean Game Awards. Whatever.

No but hey good for Capcom.

There’s a weekly quest on Xbox Game Pass that’s about to expire tomorrow, to get 10 gold orbs in this game. Is that something that will take a long time for someone who has never played? Or can I get home today and get it done in about 10 minutes?

I remember them giving them out pretty frequently, 1 or 2 per mission. It might still take you 6 or 7 hours.

Finally got around to playing this! Huge fan of the series (even DmC). Man this game is a blast. Echoing what others have said about Dante being overwhelming. Eight weapons, a handful of styles, an addition to the DT system. I’m having an absolute blast. Pretty deep, on Mission 18 I think and quickly approaching the finale.

Really loving playing as V, fantastic change of pace from the usual slicing and dicing. Wish he had more levels!

Overall I would say the game seems a little easier (or at least less punishing) than other entries. I’m only ever dying on bosses, and most bosses I beat on the first try. Playing through on Devil Hunter. Do the harder modes change much or do they just give enemies that can kill you faster and take a ton of hits?

Only complaints are nitpicks; levels aren’t super interesting (but they’re kind of besides the point), and mostly I’m just greedy and want more of everything! With DMC3: SE out for Switch I might have to pick that up in the near future…

You’ll definitely want to play the next difficulty. Without a doubt. The one after that is where it turns into a grind.

Beat the game last night! Final boss was a good step up in difficulty and took a bunch of tries. Still super overwhelmed with Dante’s moveset; looking forward to ironing it out on Son of Sparda difficulty.