My new favorite thing to do when I don’t have any particular objective is to quickly go back to the Tower in Act 1 and kill the Countess and get some Runes.

Standard leveling for me is cold plains waypoint until 6, and then countess runs till 14+. Countess runs are great, not only for runes, but there are always at least one champ/elite pack per floor, so it’s the best spot to farm exp as well.

Lots of gems as well.

Ya’ll are pussy-whipped by Duriel

Finished Nightmare with my BlizzBall Sorceress. Thankfully a couple minutes before getting to the Ancients I got a 4-socket crystal sword drop which let me finally make the Spirit runeword. That gave me a pretty big bump in damage. Right after that the Soulfeast Tine unique dropped which gave my Merc a boost in damage and a big boost in survivability because of its life leach stat.

Apart from Duriel, Nightmare was easier than Normal for my build. I was able to kill almost all of Baal’s summons with Blizzard without them hardly even being on screen, and Baal himself was a pushover.

Still only the one death, but now the real challenge begins. All of my resists are currently in the negative in Hell, and now the cold immunes are going to be all over the place, nullifying my most powerful skill. At this point I’m putting everything into Fire Ball, and then Fire Bolt after that, so hopefully I can get my fire up to a level where I don’t have to worry about cold immunes.

The Fire / Cold immunes though? Here’s hoping my Mercenary can keep up…

Reading all this stuff makes me want to buy it. But I’m not going to: sticking to Titan Quest and Far Cry 6 (co-op) for a while, and I still have to play The Last of Us 2 (which I bought two months ago already). So no, not doing it. NO!

I might have to put this thread on mute though…

Classic! Thanks for the laugh.

No reason to play TQ when Grim Dawn is out there

No reason to play TQ when Grim Dawn is out there

Actually, there is: I played Grim Dawn for over a hundred hours (might even be 200+) and I haven’t played Titan Quest yet. Sometimes you need something new (kind of).

Actually, there is: I played Grim Dawn for over a hundred hours (might even be 200+) and I haven’t played Titan Quest yet.

I stand corrected. Have fun with Typhon. He’s like Duriel, but worse :)

The jump in difficulty in Hell is ridiculous. I managed to get some of my resists back up, but my Merc is just getting routinely destroyed. I’m considering just leaving him out of the equation until I can upgrade his gear substantially. He’s basically just using all my gold and rejuvenation potions at this point and not contributing a whole lot.

My goal was to get to the Tamoe Highlands / Outer Cloister so I could just farm The Pit since it’s one of the highest level areas of the game, but also not very difficult to clear. 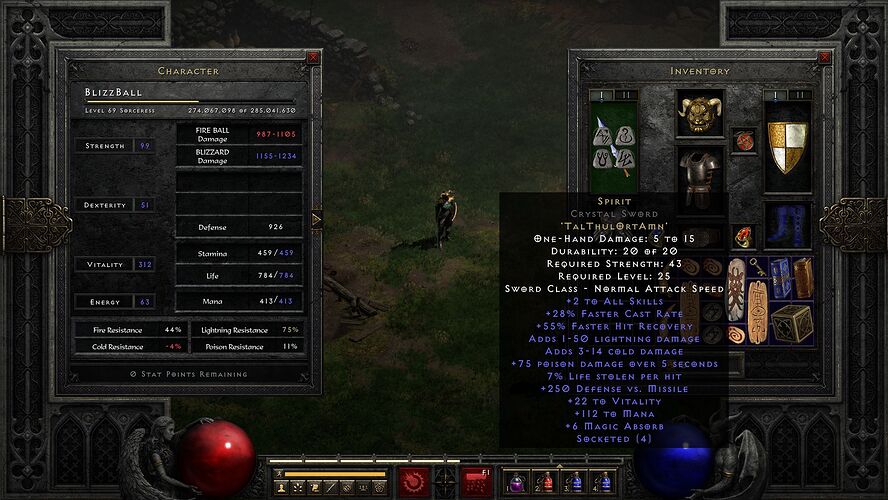 My gloves, belt, boots, and jewelry are all mediocre, so hopefully I can get some good drops to improve upon them. My mercenary just needs better everything.

The jump in difficulty in Hell is ridiculous

My palie is resist capped, with 2 of the resists being above the typical max, my merc is also just about resist capped with pretty amazing gear on, I still get owned in Hell difficulty. The game is just brutal on hell, especially if you run into the wrong combo of 3 traits mobs can have. I’m using a prayer merc with insight on (which doubles the amount of healing prayer does by the way), he’s got a duriels shell, and vamp gaze (big life leech helm), and still get’s dropped like he’s level 1 all the time.

I really love D2 in nightmare, to me it’s the perfect balance, you have to watch out for stuff, but you can actually get your character and merc to a solid defensive level. Once you get to hell, the game really loses me, I have never cared for ‘blink and your dead’ game mechanics, and Blizzard has always been really fond of that design.

The jump in difficulty in Hell is ridiculous

How I remember the separation of difficulty

Normal and Nightmare can be played through with some farming for items/runes and gaining levels.
Hell changes things and certain bonuses from items become mandatory:

It will take you thousands of hours to farm all of that alone, Hell is not balanced around single player.

It will take you thousands of hours to farm all of that alone, Hell is not balanced around single player.

I pretty much have all of that at this point. Like I said, all maxed resists, fire and lightning being over capped, every possible point into vitality, capped block with shield buff up. I’m certainly not at end game inventory filled with charms/torch etc, but my character should be a little tougher than it plays given what I do have going. A lot of it is just level vs mob level, I suppose I could go grind out levels doing nighmare ball runs or something, but I just lose the will for it at a certain point.

Eh, I just don’t like the transition to Hell, I think especially that first act or two shouldn’t be so jarring.

What build is it? What’s current damage? Do you have max block? Is your hp above 1k? I didn’t mean having resists over maximum, I meant having items that increase maximum resistance, ie. pushing it from 75% to 80%. Finally, you need to be at the very least lvl 70.

I got really lucking last night with my Barbarian who is doing Hell on Normal difficulty. An Amn rune dropped, and then a Dol rune dropped! So early in the game! Now I’m eyeing all these runewords wondering what I should make with this incredible bounty.

I started a bowazon last night, I couldn’t resist. It’s funny how sometimes our first experiences with a game completely color our perceptions for years and years. I spent most of my time playing not just Bow using Amazons in Diablo 2, but because it was hardcore, I spent most of that time playing the exact same build of Bowazon, trying to always build one centered around Cold Arrow. I initially tried multishot once and didn’t like how I ran out of mana constantly so I NEVER TRIED IT AGAIN in all those years. Same with Strafe.

Initially I did the same with Magic arrow, dismissing it, but then a friend of mine who hates Archers played an Amazon briefly and he was kicking ass by putting all his early points into Magic Arrow, and that’s when I discovered that when you put enough points in, you don’t use mana anymore, and those paltry editions to damage might not seem like much, but they get multiplied by various multipliers, and end up being a pretty nice default attack on the left click. So then the one bow amazon hardcore character I always kept trying was one with lots of points in the level 30 cold arrow skill, and 20 points into Magic arrow for left click, and then lots of points into various passive amazon skills. Eventually I discovered that incorporating a Valkyrie into that build was essential too, so that went in there too.

Anyway, TLDR: I spent all that time playing Bowazons and never really gave Multishot or Strafe a real try.

Until last night. I took my longbow with the 3 chipped emeralds that I usually give to my mercenary archer, and used that with multishot. Wow. I can poison stuff like using a shotgun, and everything dies! It’s so freakin’ satisfying.

And yes, the more points I put into Multishot, the more expensive it gets, so I don’t really have the mana for it, but I can use it sporadically and keep using mana potions as I come across them. It’s not bad.

Bowazon is a fun one for me, too, doubly so with the controller. Magic Arrow is a nifty little secret weapon, because, as you mention, it can be developed into a mana-cheap default attack that provides extra hit prob %. I use a buffed fire arrow for AOE/shotgun attacks. I have points in exploding arrow when I need lots of distance AOE to chip away some health before engagement, but I don’t lean on it.