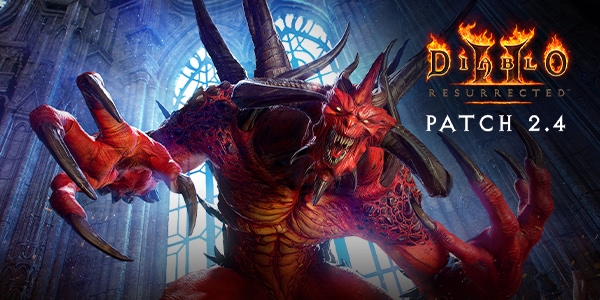 Read on to learn more about Patch 2.4 balance updates and the official Ladder launch.

God, with the NMS patch and my current Nightmare Reaper addiction

These are a few of my favorite things…

Improved the reliability of pets, summons, and mercenaries teleporting to the player instead of being despawned

I clearly did not read closely enough, but I was playing my Summon Necro and was just amazed at how well all his minions stayed around. They also buffed the Skeleton Mages and they are substantially more sturdy now and may actually be worth investing in.

Before the patch, the minions the Necro got from the Revive skill had a really bad tendency to disappear. The skeletons and golem did a pretty good job of keeping with you but the distance between where you enter the Worldstone Chamber to Baal was enough to lose a significant portion of your Revive army.

Do summons still all get trashed by act bosses though? That was the thing that always kept me from playing summoners. It’s all fun and games until one lightning hose wipes out your whole army because of the hard-coded 7x or whatever damage multiplier.

The only Necro summon that would regularly get trashed was the Skeleton Mage but I’ve taken them to Hell Diablo and Baal and all of them survived both fights on multiple runs (my lvl 90 Necro only has 1pt in it but the skill itself is at lvl 6).

The only trouble I’ve ever had with my Necro was usually with Duriel (Act 2 boss) when I would make a fresh, non-twinked toon, but I think most characters have a struggle there too.

Huh. To be fair I don’t know that I ever had a serious run at Necro through Hell.

I’m super curious about the Assassin changes. It’s my favorite class, and the charge attack change (finishing moves just take one of each charge) is pretty drastic.

Looks like they also buffed the hell out of the summons for the Druid as well. I think I know what I’ll be working on next!

Developer Comments: The restriction of the Druid being allowed only one type of summonable at a time has restricted the viability of this build and has hampered the fantasy of a Druid Summoner from living up to its full potential. We feel that a druid being able to summon all of his allies at once will make for a more interesting and fun playstyle.

Yeah! Which is good, because they weren’t terribly viable in Nightmare, heh.

Looks like they also buffed the hell out of the summons for the Druid as well. I think I know what I’ll be working on next!

Oh wow. That is a huge change. I am in Act 2 hell with my druid and basically worthless, but being able to summon more stuff at once than just bear and spirit might help.

I really want some sort of wolfageddon or bearricane to work. Melee phys/lightning or phys/fire Assassin might be awesome though too.

Really liking the necro pet fix. They are much more responsive. Like they really want to be near me all the time. And why not, I’m a very pleasant death mage.

So I’m leveling a melee Assassin. She’s a baby still, but through Duriel with minor twinking (mostly a Stealth breastplate, which is more QoL than raw power):

Haaaaaaaaaaaaaaahahahahaha, oh this is great. I’m just going for Claws of Thunder on the theory that between Tiger Strike + Dragon Claw and a merc she’ll be able to deal with lightning immunes when the time comes, and CoT is by far the strongest way to murder stuff with martial arts here.

So the change is “finishing moves only consume one charge,” right? The practical effect is that each Dragon Claw finisher applies CoT 3 (charged bolts + nova + direct dmg) and CoT 2 (nova + dd), and then a single attack with CoT gets you two more points because the elemental charge moves are all dual strikes if you have two claws equipped.

The lightning spam is real, brothers, and it is glorious.

Normally I crank difficulty down to /players 4 at Andariel and leave it there, because the rewards don’t scale well past that compared to the increased mob HP (especially if you’re relying on mana per kill, as I usually am early on).

This time I’m still at 8 through Duriel because everything is still dying so fast to my two shitty gambled claws that it just doesn’t matter.

Dunno if CoT is going to scale all that well through Hell, but hey, that’s what respecs are for. Meanwhile, Burst of Speed and Cloak of Shadows are still the two best utility skills in the friggin’ game and I love them the most.

Been playing this on the Switch and I’m really happy with it - even more so now that the 2.4 patch (finally) went live, so playing on the Switch doesn’t feel like an eternity since I can set the # of players (I have it at 4 right now, Act I still and around level 16-17).

So I went with Pure Fire Mage for my character, as on the PC I did an Ice mage up to level 45 or so, and I got the hammer and unlocked the Imbue and while I know I should have waited, I wanted a cool weapon to hold that would be awesome since I’m still using the dumb short staff the Mage starts with (sigh). Anyway, bearing in mind the only point I have spent outside of the Fire tree is one point in Chill armor here is the fucking staff I got. Probably the best thing I’ve ever seen with an imbue, it blew my fucking mind, but again, pure fucking fire mage. Sigh. 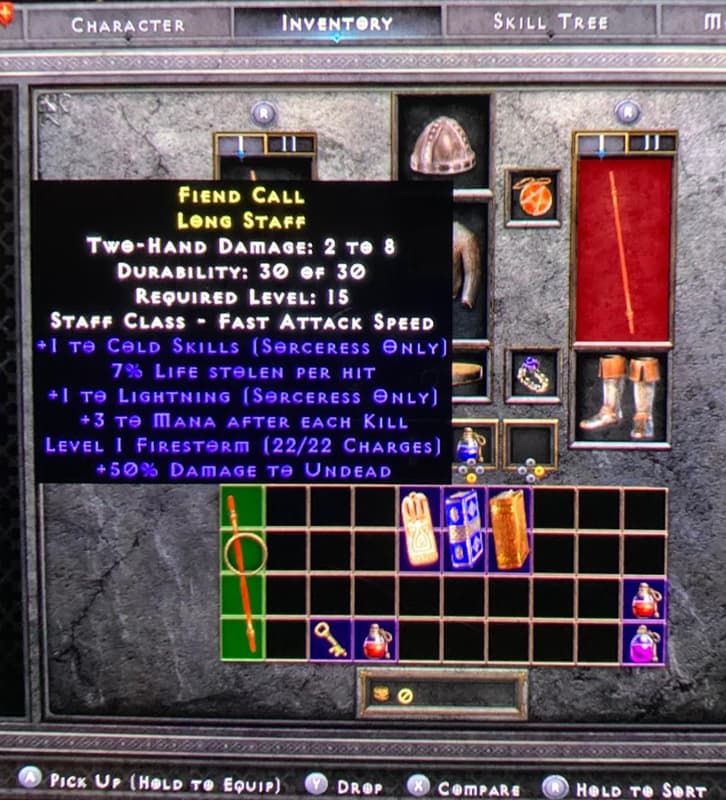 That is a kick-ass staff. Now you have one for when you create a Cold Mage on the Switch.

The thing to remember with Diablo 2 is: you’ll always create that character in the future. No worries. Because we will always be playing Diablo 2. Forever, until we pass.

Charsi is for saving for a garbage level 75 amulet, duh.

Leveling staves are all butt compared to Leaf anyway, which you’ll very likely to have access to by early a3.

Can also sell some armor and gamble up some functional orb.

Final protip: helms in general are trash early. Socket a couple cheap-as-free Tir runes in a skull cap and rejoice in the reduction or ideally elimination of your mana problems.

Did you guys notice the UI changes? There’s a button to refresh inventory and gambling an item doesn’t remove the type from the window. So you can just refresh inventory until whatever base type you’re looking for shows up, then gamble your whole stash away without ever having to leave the gambling UI. It’s such an improvement!

It really makes you wonder: What the heck, why did we have to wait so many years between patches?

Though, I guess it’s the kind of game where you can continue to make quality of life changes in perpetuity, but you have to stop supporting the game at some point. But in the case of Diablo 2: No, you don’t have to.