Reading about the real Diablo III is what discouraged me of getting the PC version last year.

Oooh, oooh, thought this started tomorrow. Won’t have time to start a season on the PS4 until tomorrow night probably but looking forward to it!

If only the PS4 version performed better.

Anybody know how it runs on PS4 pro?

I haven’t tried it, but there’s this:

Counterpoint: playing Diablo on the PS4 means having to buy a PS4.

On the other hand, only the PC version lets you do this. 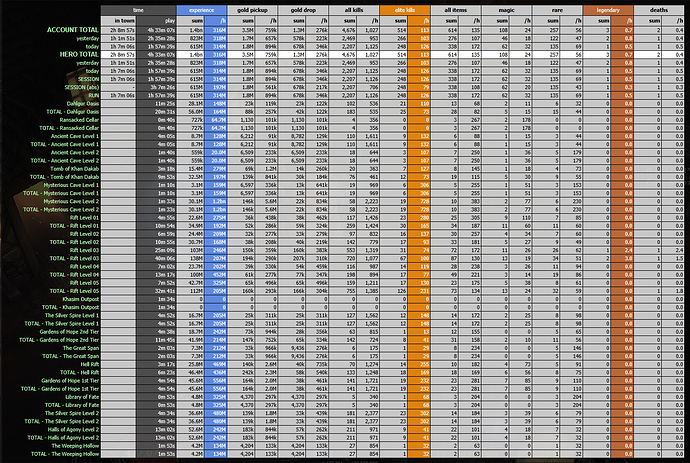 The PC version has an in-game spreadsheet?

Ok, I have to admit, I find that very surprising. Wait, this is an April’s Fool thing isn’t it?

It is a DirectX Overlay that gathers a lot of information about your runs so you can find the most optimal one; it also does a lot of other optional things like showing actual damage from skills, etc.

Dear god, why would you want to play using a controller when you can use a mouse and keyboard?

Navigating that spreadsheet would be a real problem with a PS4 controller. You make a strong case.

Dear god, why would you want to play using a controller when you can use a mouse and keyboard?

That’s like asking why would you want to watch color TV when you can watch black-and-white TV.

Seriously, though, Blizzard nailed the controller support for Diablo III by actually doing to work to adapt it to a controller. In the end, it’s way more intuitive to directly control your character with an analog stick then to drag him around like he’s on a piece of string. I remember fretting about how to attack without moving my character. I actually played for a while before I realized, oh, wait, just don’t move the analog stick!

I am not good enough at Diablo III to play it as a hardcore strategy game published by Paradox.

Counterpoint: playing Diablo on the PS4 means having to buy a PS4.

Uh, what else are you going to play your PS4 games on? Game, set, and match!

That’s like asking why would you want to watch color TV when you can watch black-and-white TV.

I’m glad PS4 is getting seasons, but it hardly makes the PC version obsolete.

I wonder why they haven’t patched in controller support on PC? Seems like they should be able to do that, if they wanted to?

Seriously, though, don’t knock it till you’ve tried it. What are you doing tonight? I’ve got plenty of extra controllers. Come over and help me level my Witch Doctor.

I wonder why they haven’t patched in controller support on PC?

Because controller support is integrated into design decisions (i.e. inventory management on the fly, evasion, spell targeting, etc), as it should be. It’s really not something they could patch in given the state of the PC version.

Impressive. And to think it only took 5 years.