I’ve done TTR on the phone app version, local only, but had no idea how the Steam one worked

It all works through the account you set up on the publisher’s end; not Steam. So, iPad and Steam players can play together just fine.

I’ve done TTR on the phone app version, local only, but had no idea how the Steam one worked.

It works crossplatform, so you’ve basically already played the game on your app. Several of them do that now, and it’s…awesome.

Board games are a great way to get the people with 20 year old laptops to play modern games because any (most) of them can figure out how to do it on a phone. It’s slightly harder to get them to pay a few bucks though because so many of them are used to free.

Is there an option in the digital Blood Rage to remove the Odin’s Throne card?

Not that I am aware of.

Perspective from one of designer and publisher on BGA: 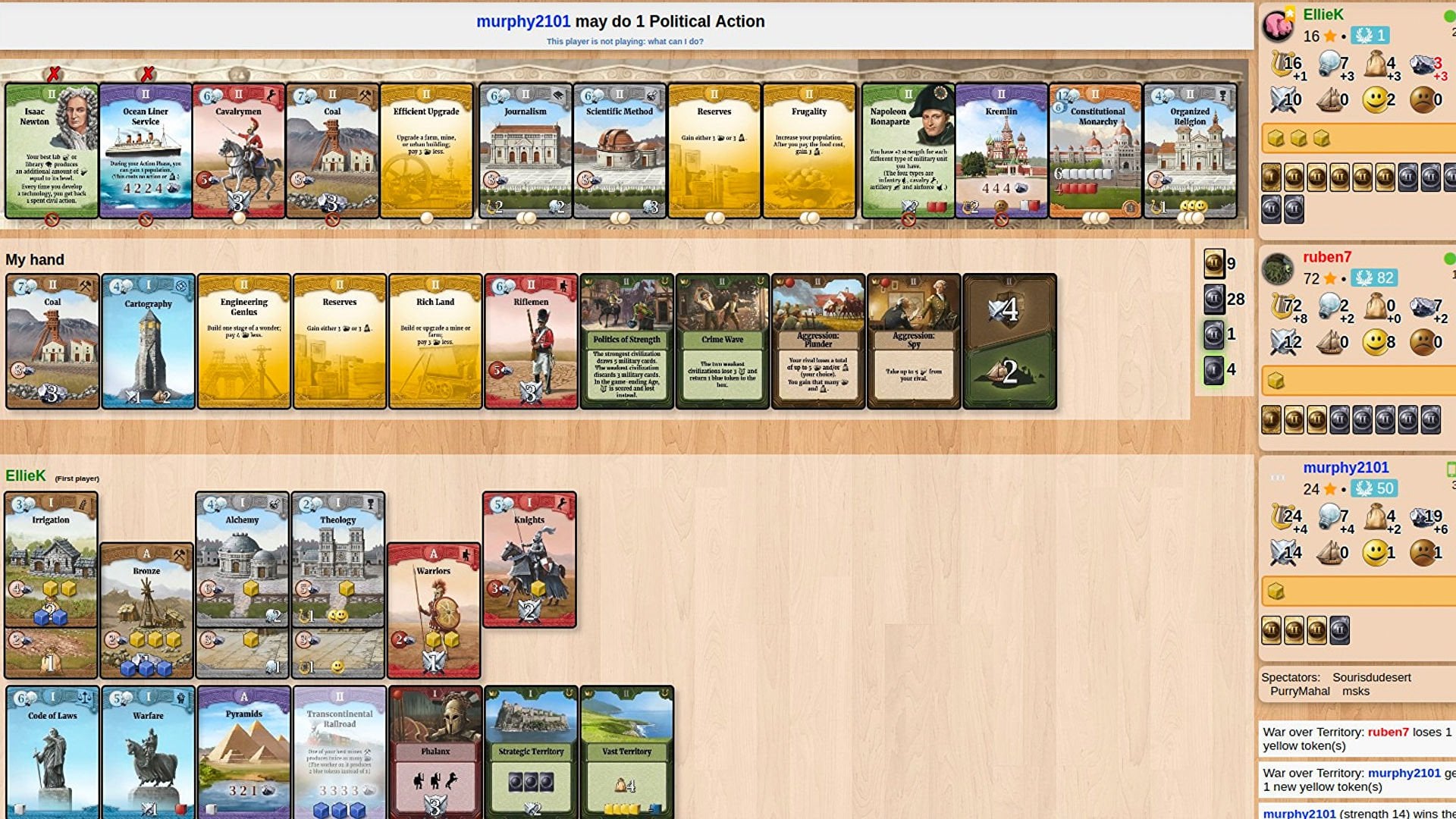 r/boardgames - Board Game Arena has been bought by Catan, Pandemic and Ticket...

I can see why he is rather upset.

I had kind of forgotten that the whole thing was previously basically a hobby site, that makes it extra gross.

I mean, by early 2020 it was already looking very professional and commercial, with a well developed premium offering. I guess license owners were previously happy with licensing stuff for free for the publicity, but the world has changed. I expect the free stuff to melt away. It’s still an excellent value proposition for premium.

Well, specifically, they were happy to let a two man operation doing it as a hobby license it for free because they were ostensibly not turning a profit on it. Premium was supposedly to fund site operation. But a big company like Asmodee is a whole different ballgame. And would be for me too.

It’s too bad. I am sure they are going to lose a lot of free games for the same reason. A passion project, enthusiast hobby approach rarely rolls into wanting to give a huge company free content to get more paying customers for them.

Asmodee might also be buying it for the tech - they’re in the business of boardgames and probably feeling the crunch of having to maintain a ton of different codebases for all the different games they’ve developed/acquired. They might be looking to move everything to BGA (at least under the hood) since it’s been shown to handle lots of different kinds of games. Simplifies turning all their boardgame library into apps. If so, anybody staying with BGA is a free bonus on top of that, although you’d think they’d have a default profit-sharing license ready which would be win-win (but folks tend to like I win-you lose, the VP differential for that kind of move is bigger…)

Found this guy on BGG who is maintaining a comprehensive, filterable list of iOS digital boardgame options:

Explore the "Digital board games on iOS/iPadOS [public]" view on Airtable.

Finally got over my fear/laziness of learning new boardgame rules and tackled the Sentinels of the Multiverse Oblivaeon mode (I backed the digital version way back when, but was shy about trying it when if finally dropped) - it isn’t as bad as I thought it would be, although I prepped for it via Youtube videos. Not sure how often I’ll play it, and very, very glad to have the app take care of figuring out who needs to deal damage to who and the modifiers and the like in the later turns. It’s probably ramps up to the complexity of playing two games of Team Mode Sentinels at once.

Biggest thing is that it got me playing Sentinels again, and the mod support is solid despite being alpha! All the Cauldron decks are implemented (except for the joke decks?). It’s definitely still beta - there’s some oddities in the UI implementation converting decisions to dialogs, but I’ve played all the heroes and a handful of the villains and didn’t run into any real issues. I bought the whole shebang again on Steam both to run it on my laptop and to be able to play the entire Multiverse++ (although the real app guzzles battery as much as running it via Android emulator)

Second side effect is it got me back to solo boardgaming, so I finally downloaded the free Spirit Island Android app, where you can play the tutorial and they’ve got four Spirits unlocked for some basic games (there’s a Steam version but no demo there). Finished the tutorial (which has you play River Surges in Sunlight) and played a game with Lightning’s Swift Strike. I’m really enjoying how different the Spirits play so far - there’s also Shadow and Earth, and I can’t wait to try it with more than one spirit. I’ll probably train on this and pick up the full version at the next sale - they just released Branch and Claw which I hear completes the base game!

I’m already anticipating Jagged Earth (is this Oblivaeon all over again?), but there’s also rumours of Sentinels of Earth Prime to expand the existing Sentinelsverse and the reworked Sentinels of the Multiverse Definitive Edition reboot.

No, Jagged Earth is just a giant pile of great new content for Spirit Island, there’s no crazy new modes that amplify the complexity enormously or whatever. (Well, there are some new scenarios, I guess one of those could in theory do that, but I doubt it.)

I played Memoir 44 for the first time with a friend on TTS last night. Pretty fun! I’ll definitely be playing more of that, and might even spring for a physical copy.

I also managed to finagle a download of a Tainted Grail mod for TTS, which includes fully detailed minis. Now I finally get a chance to be disappointed with TG just like everyone else.

The digital Game of Thrones is getting the Dance of Dragons expansion as DLC, which is probably going to make me buy it. I had avoided the base game because of the glaring balance issues that always turned it into a Stark vs Greyjoy (sometimes Baratheon) contest. Dance of Dragons breaths new life into the game with reworked leaders (no more Balon) and Daenerys’ extremely mobile invasion force adding a new importance on dynamic diplomacy.

Only downside to the expansion was thematic. Much rather be playing with the season 1-3 factions/characters than s4+.

I played Memoir 44 for the first time with a friend on TTS last night. Pretty fun! I’ll definitely be playing more of that, and might even spring for a physical copy.

If you like Memoir 44, I highly recommend Undaunted: Normandy. I feel it does a better job of giving you tools to mitigate the randomness in the card draw and generally manipulate the deck, so you don’t usually get into situations where you just can’t do anything.

We’ve actually played Undaunted as well! Though it’s been a few months so I don’t have the rules/gameplay fresh enough in my mind to compare the two. You might be right though about mitigating the randomness a bit.

This isn’t the mother of dragons expansion from the board game. This one doesn’t have Daenerys.