Put me down for Wingspan. It feels like playing a board game, and the rules are complex enough that it’s nice to have it handled by a computer. I was walking though Target the other day and saw three or four physical copies on the shelf; I had to pick one up just to look it over and had a little conversation with my son ‘hey, I have this on Steam’.

I gave away the giant box of stuff that is Gloomhaven once the digital version included the OC. Freed up space and I never looked back. Doing it solo with 3 characters was too much for my brain.

Pavlov’s House is pretty great on the PC. (Though I own the board game and often bring it to the table.)

A few come to mind:

Scythe, Axis and Allies Online, Raiders of the North Sea, Game of Thrones.

I bounced right off Wingspan. I guess I found it a little “cutesy”.

Hey, everyone. Looking for some Digital Boardgaming Opinions to help me with some contract work I’m going to be doing so this seemed like the right thread!

While neither is my tipper-top favorite ever, I really appreciate the design and playability of the digital adaptations of both the Ascension card game and Through the Ages. Both games have some fairly intricate scoring/play rules (can’t play this type of card/this card has to go to your discard pile/recharged to your hand/deck/whatever) etc, to the extent that for me the ease of playing these somewhat complex mechanics in digital format essentially obsoleted the original game.

These recommendations are really useful, thanks everyone! Being a guy who bought Through the Ages (analogue version) years ago–could it have been TEN years ago??–and then never found an opportunity to sit people down and play it, I had been curious about the supposedly great mobile version. I just never sprung for it until now! I agree with @geggis, the tutorial is great. And compared to a lot of the adaptations I’m checking out, it seems to do a fantastic job putting the right information in front of you, and folding the other stuff away where you can get to it if you need it. Plus, it has a main game screen that suggests a world, not just a table.

I’m wanting to try out the Arkham Horror Card Game both live and via Tabletop Sim. To get up to speed I watched a Rodney Smith video and read the rules.

I’m wondering which TTS mods are recommended to start out? I see a whole laundry list of mods.

Which do you folks recommend?

The absolute gold standard TTS mod for AH is the “Super Complete” version. Unfortunately it hasn’t been available on the Steam Workshop for quite some time, and can now only be found on their Discord server, AFAIK. That’s where I get the updates, anyway.

If you do Discord, here’s a link: Super Complete Existential Dread.

@Matt_W actually sent me a very helpful PM with an invite to that Discord channel and helped me download and save that mod so now I just need to learn the game a bit better and play test it.

My friends want to try Frostpunk on TTS this weekend but I was unable to find a reasonable “how to play” type video, which is usually how I learn games these days. This game looks too heavy to self-teach. I found a 4.5 hour and a 3.5 hour playthrough video but I don’t have that kind of time or attention.

Is there a good how to play for Frostpunk the boardgame?

The rulebook will surely take less than 3.5 hours to read.

I’d guess the Paul Grogan one is the best. It’s a four hour playthrough video but the first hour is where he explains the rules. Paul is probably my favorite rules explainer, and he wrote the rulebook for this game, so I’d start there. 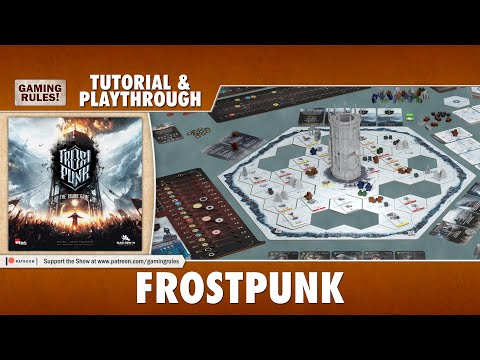 Pocket Civ released into Early Access today. I was quite taken with the demo when I played it during the last Steamfest.

I just played the Spirit Island digital version for the first time. It has a pretty nice tutorial. I’ve played 2 games with my wife with the physical board game - which we lost 1 and won one. I lost this one one turn before I could play a card that would have won it. The game seems very tightly tuned with it’s turn limit constraint. I mean, I’m still new to the game and am far from an expert so maybe with a couple more games I’ll do better. I figure I’ll play each spirit once with the easy rules (no corruption card, no adversary) and then move to the standard way - as long as I can win some games before that.

The UI in this is really clear and straight forward, and playing it alone gave me a better grasp about how the game works.

Turns haven’t generally been my issue in Spirit Island, although I’ve also usually won my games (I’ve yet to try more than a couple points worth of difficulty, mind you.). Blight is usually much tighter.

I lost another close one, this time due to blight. Then I tried one more time and finally won with 4 invasion cards left. Tomorrow I get to try a new spirit.

I just realized something… playing without the blight cards just makes things more simple, but actually makes the game harder because you lose after losing your first batch of blight. With the card at least you get a second chance, so if you’re close to winning then you still can, correct? Does using a blight card make the game more difficult in some other way?

They will have some sort of effect, depends from card to card, and then also if you’re playing with events (introduced in the expansions) some will have a different effect if you’re on the blighted side.

OK, I’m moving up to intermediate now. I won my last couple games and pretty handily in my last one. It really pays off to try and corral the invaders to the coast where they can be contained. I’m not sure if it will be easy to wrap my head around controlling two spirits, but that is probably when the strategic options really open up.

For me that’s the biggest problem with the game, the fun space between “too easy” and “too hard” seems quite narrow and will vary depending on who is playing and which spirits you have.

I have played a ton of Spirit Island over the last several days. I went through all of the spirits (not Branch and Claw though) and played 1 spirit games with them. At first I kept it really basic - no blight card, no adversary, and the automatic progression. After a couple of wins I turned off the automatic progression and then soon after started with the blight card. I had some trouble in the beginning, but then started winning more often then not. The only one I couldn’t beat it the ocean-based one that can’t go inland.

Then I went back to the basic spirit and played against an adversary and just barely won. Then I tried a 2 spirit game for the first time with a different adversary and won that one too. After looking at the different levels for the adversaries I wonder how anyone can beat those! I don’t think I’ll progress that far.

In any case, this is such a fun game. Each one is like a changing puzzle to try and solve. When I played with 2 spirits, it look me forever to decide what to do for my turns. I had to keep jumping back and forth between the 2 spirits and the island. Right before I won, things were looking pretty bleak. Two areas had a ton of invaders because i kept corralling them there. After going for some high power cards I was able to take one out after building up 17 defense and putting 4 meeples in there with some damage spells. On the other one I dropped a tsunami + the power that does 1 damage to all invaders - which had like 7 explorers. Between the two powers I wiped them out.

I found playing solo really helped me learn the game better than when my wife and I played the physical game twice. Also, playing by my self allowed me to take all the time I needed without feeling like I was taking too long, or feeling the pressure of that I better make a good play.

The PC version is so good for learning too, because it allows undos, up until the point where you reveal new information - like drawing a new power. I was making mistakes checking the range of powers, but in most cases it wasn’t a problem to undo the choice - which would have been difficult in the physical version.