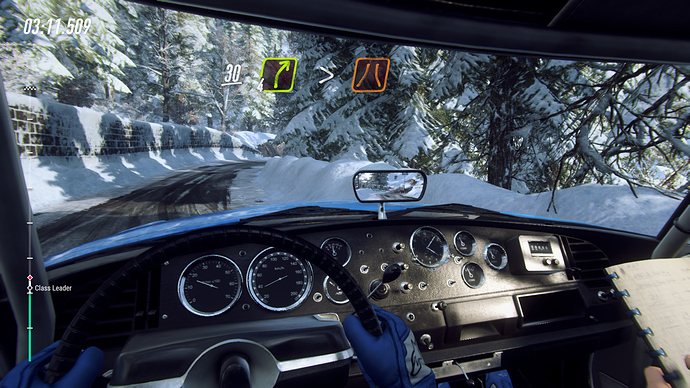 They might not have been as good at building well engineered cars back in the 60s, but man, they sure knew how to build an attractive dashboard.

More Dials!
I really think that’s enough.
Put in a dial to show the number of working dials!

Guys! I did the seemingly impossible. I found an R5 car that’s even more fun than the Ford Fiesta R5. It’s called the Space Star! That’s right. You read that right. It’s a Mitsubishi Space Star R5. Just like with all the cars in the game, it’s only available to buy half the day, and not available the other half, so you just have to watch for it. It’s really fun. The amount of control you get is amazing.

This recommendation is based on the base level car. I haven’t upgraded it through the levels yet. Maybe as it gets more powerful it gets worse, I don’t know. But I’m going to find out.

Both Weekly challenges this week are R5-based, so it was a good opportunity to take it for a spin in Wales and in Poland. Wales was just perfect for this car. Poland was … heart-stoppingly exciting, but I did destroy my tires in the first round and never really recovered. One day I’m going to do a perfect run in Poland in a fast car, and it’s going to be glorious. But until then, it’s the place where I go really fast, and do almost-perfect runs until I inevitably crash into something and die or crash into something and do heavy damage.

Game of the Year Edition coming. I think this means the Colin McRae Flat Out pack will be the last piece of content coming.

Looks like Scotland is very much like Wales with lots of wood logs and ditches. Lots more high speed straight sections though in this portion than any section in Wales.

Scotland does look like bits of Wales stapled together with Saltires thrown in, but I’ll take that.

I’m looking forward to driving this Subaru Legacy in the game. From his comments it sounds like it’s a Group A car.

I love the look and feel of the cockpit in this Subaru. So much visibility of the road!

I love these Colin stories.

This scenario looks super hard. Keeping your average speed up in a Group B MG, which is an insanely hard car to drive just to finish a race without crashing.

Spoiler alert! We’ll all be doing this next week. Though not as fast as this.

I woke up at 5 this morning, a full hour before my alarm clock. I was just so excited for this DLC. I had both the Windows version and Steam version downloading the 28 GB update, then I played for about 15 minutes before heading to work.

Since on the Windows 10 version, I bought the Year One pack, it comes with the Colin McRae pack for free. But it’s the Steam version on which I play career mode. Since they priced it so damn reasonably ($10), I’ll probably double dip and buy it on Steam as well, just so that I have Scotland in my career rotation for the Daily/Weekly/Monthly challenges. Plus the two Subarus, of course.

As for the scenarios themselves, the game adds another tab to the main menu at the top. So you press RB away from Career mode and the other modes into Colin Mcrae tab. And that’s where you have all the different parts of Colin’s career, including all the different scenarios (40 in total I think) to complete. You set a difficulty first. I set it to Hard to start off with, though I know I’ll inevitably try them on Very Hard as well for that achievement.

A thumbs up for Scotland. Suitably fast, narrow and in parts technical. Love it! Hopefully we get more rallies like it in future games when it comes to the narrowness of the road. Provides a different kind of challenge from many of the other event locations.

Yeah, it’s way more challenging than it looks. The fast speed sections are brutal in a very different way than Poland. In both, it’s one mistake and you’re dead, but Scotland leads to different kinds of mistakes.

Also, Scotland has these logs on the side of the road. Not the big obvious ones, but much smaller hidden logs. I accidentally found a few of them already. Why would someone put a log there? Because they’re evil that’s why. Evil.

As readers of this thread know, I wake up every morning and play DiRT Rally 2.0 to wake up my mind so that I’m semi-coherent in the morning.

This morning the connection to codemaster’s servers was soooooooo slow. In 45 minutes I was only able to do one race because the rest of the time was used in trying to connect to Racenet.

I suspect this is because the game became free on PS+, so that must have seen a huge influx of users in Europe. I doubt there were a lot of people in North America trying to play DiRT Rally 2.0 at 6:15am Central.

I hope this means that a lot of those PS+ users will enjoy the game and give Codies more money. The $10 for the Colin McRae flat out pack is very reasonable.

This morning, connection to Racenet was faster than it’s ever been before. I can just imagine all the people who tried it yesterday for the first time got a bad first impression and didn’t come back today. Or, more optimistically, Codemasters added extra servers to handle the load and it’s now better than ever.

There’s a daily challenge where you have to use the Alpine in Argentina. God, that car is just freakin’ amazing. And that course is tailor-made for that car. There’s so many turns on that course that are uphill. So when you’re turning a rear-wheel drive car, it’s not a problem that the front wheels touching the ground properly because you’re turning uphill. It’s just beautiful. A great choice by a designer to entice the new people who just started playing yesterday to get a good impression of the Alpine without being overwhelmed.

There’s a daily challenge where you have to use the Alpine in Argentina. God, that car is just freakin’ amazing.

I’ve really only found two cars in this game I enjoy driving - the DS21 and the Alpine. Both just have this lovely sense of weight that makes sense to me. Everything else feels like it’s made of styrofoam. And yeah, Argentina is a great course for that sort of car.

Not just RWD, the 110 is rear engine too, which gives it a lot of junk in the trunk to hang out in gravel hairpins. It was my favourite car in DR1, to the degree that I soured on Dirt 4 as soon as I tried the 110 and found it wanting.

It really is the perfect car for events like Argentina, all of El Condor suits it down to a tee. What it might lack in pure power against its rivals it makes up for everywhere else when driven smoothly. The power-to-weight ratio is a dream going uphill too.

This seems more relevant in here than the DiRT 5 thread since it is more pertinent to the new dedicated DiRT Rally team.

Codemasters to create games based on the World Rally Championship