What I’ve played of the demo tells me it’s way better than Disciples 3 despite it pretty dramatically changing the series.

The artwork of 3 was fantastic though - Its kinda what used to set the series apart, which is why I find it a shame that this current edition shares none of the same evocative art, be it both graphics and music. 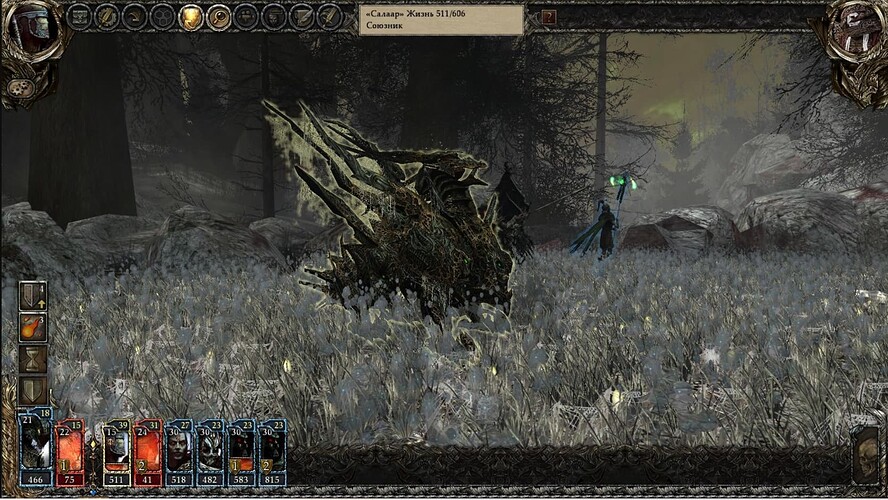 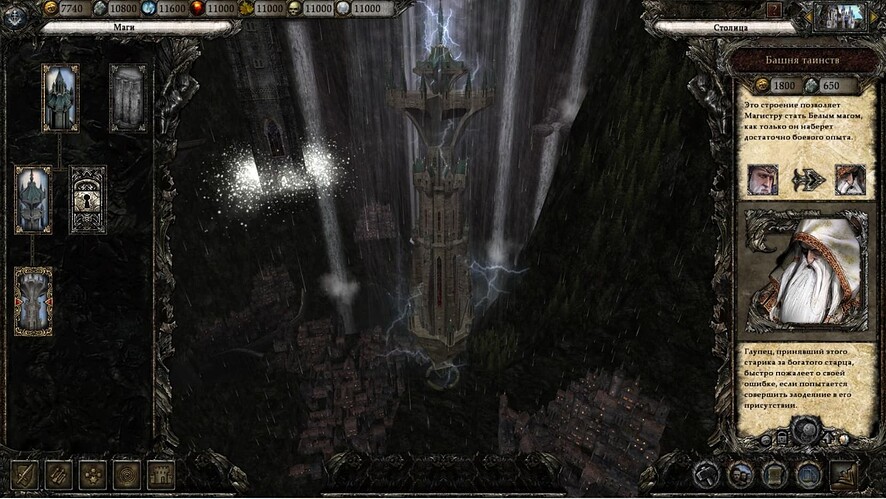 I have no idea what I’m looking at, at that first screenshot!

I never was fond of the turn the series took with the second game. Those Gothic esthetics were a farcry from the Druillet-ish atmosphere of the first game. But the biggest caveat of the second game was the lackluster AI: the first game was very small in scope in a way, but the programmed computer opponent knew how to play the game and especially use magic efficiently. No other game inspired by the HoMM (including HoMM) never managed that.

I like the art style of 2 and 3, but the 3d of 3 didn’t do it any favors and neither did the game sucking.

@krayzkrok I’m interested in your thoughts as you get further in. I enjoyed the demo enough to add it to my wishlist.

I played right up to the 2 hour, refund window, and I can’t quite tell how I feel about it. I would love a King’s Bounty/Disciples hybrid, but I can’t tell if this has enough depth to it. The total number of possible units/combinations seems much lower than I typically enjoy from this type of game. The entry level units do not seem to have many interesting mechanics/skills. I’m nervous to continue further in without knowing if I’m going to find it interesting or far more limited than I would like.

I refunded because the combat to me felt stale and like busywork pretty fast. The missing of control zones, the samey rather uninteresting battlefields and the one-not-so-unique-unit-per-tile didn’t give me a good feeling. I was way past the 2 hours but Steam was generous.
As far as I have read the gameplay does not change much although there will be some cool bosses and unique battlefields.

Still early days for me but I think I am going to stick with this one. Just got past the prologue and getting familiar with the game systems. Looking forward to it.

I have been a fan of the Disciples series since Disciples II. Although I did not care as much for Disciples III: Renaissance as its predecessor, I am looking forward to experiencing the latest Disciples game.

Thank you, krayzkrok, for starting this thread which made me aware of Disciples: Liberation.

I never played the 1st in the series, but I did play the 2nd when it came out and liked it well enough to play all of the expansions.
I think that it could improve on the uber stack mechanic. Essentially, enemy stacks were resources that had to be carefully used by the main stack to develop it to the point that it could survive the scenario. If this stack died, it was reload time. It was nigh impossible to maintain 2 stacks on the same level.

I haven’t played the 3rd enough to see if it had the same issue. How is this one in this regard?

Tried the demo. I only dimly remember the earlier games in the series. The demo was…ok. I found the combat a bit simplistic and uninteresting, albeit I was only controlling two units.

So far so good. I’ve gone in a different direction to the demo, so I don’t feel like I’m replaying early game content so far. There are four faction areas that you can visit, ranging from easy to hard; I’ve gone to the demon area which seems a bit more interesting than the elves! Several hours in, tactical battles definitely start off slow, but once you get a few levels under your belt, unlock more units, and your leadership goes up so you can field more units per battle, things start to get a lot more interesting. Challenge is slowly increasing. I guess if you’re looking for Dark Souls of HoMM this isn’t going to scratch that itch, at least not at first. I like the tactical possibilities of field units on front and back rows to unlock different abilities, but as I said it’s too early yet for this to really make any difference.

To add further complication, the main power conduit to our house died yesterday so there’s not much scope for Discipling at night sitting outside by candle light with termites crowding my laptop screen. Atmospheric, perhaps. Practical, less so.

I like that armies are a mix of generic troops that you can recruit at your base and companions that you meet along the way. It really makes it feel like you are guiding the fortunes of a tightknit mercenary band.

Maintaining faction is a bit tricky though. In order to gain access to higher level troops, you need to grow your reputation through questing and sometimes the choices you need to make can rub against the grain. Want to act like a virtuous hero? Sure, go ahead…but you run the risk of sabotaging your recruitment pool and bumming out the troops in your band.

Still only around 9 hours in so I am not sure how this plays out over the long term.

So I streamed this morning and enjoyed it very much. It needs to explain some things better and the writing is questionable, but one thing really stood out:

The voice acting. Dear god the voice acting. I’ve heard bad voice acting in my time (mid-2000s eastern European space games anyone?) but holy shit it was HILARIOUS in this game. There was one guard in particular that had me CRYING.

Yeah that guard was in the demo and holy shit, definitely the cleaner or the janitor. I assume that’s the mercenary area.

But in the full game I’ve gone first to the demon realm and the voice acting and writing in general is a lot better there. There’s some great scenery chewing by some characters, as you’d expect from demons, and the demons have much better catchphrases during combat too. My only fear is that it’s all downhill - character wise - once I leave this place!

As much as I’m enjoying this game, my main criticism so far is the tactical battles have been easy. There’s quite a bit of depth in there with the different systems, and yet you barely ever need to use it because you walk over nearly everything. I went to the demon area first because it was slightly higher difficulty, but after 7 hours of play I still hadn’t come close to losing a single unit. This is in direct contrast to King’s Bounty Crossworlds which I was playing prior to this, where I could happily get wiped out within 5 mins of starting.

But then, finally, I hit a battle that nearly wiped the party! Oh boy, it was so much fun, finally I had to think strategically, cast spells and use abilities that worked synergistically, think about which units were in play and which on the back line buffing. And the next one too, I lost several units, it was glorious! I mean, seriously, I’d heard the game ramped up difficulty slowly but I wasn’t expecting a curve quite this gentle. Maybe my perceptions are skewed from too many short indie games. ;) I haven’t unlocked any blueprints yet to even start building or using any of the resources I keep collecting and harvesting. But now that I’ve seen a glimpse of the game proper, where I’m in serious danger of losing battles, I want more.

So, any more recent impressions of this? It sounds like it might be up my alley (I enjoyed the first Disciples game and the Rise of the Elves add-on/sequel a lot but it’s been many years since I played them.)

I’m still on the fence too. I probably should find time to try out the demo.

A Disciples-like game that came out some years back. Mixed reviews and it is rough around the edges and definitely wait for a sale, but I managed to get about 40 hours in (I’m slow but that also included a player mod) and it did scratch that Disciples itch.

I didn’t like Eisenwald at all. A cruel disappointment as I was really looking forward to it, but it is indeed rough. the game is quite limited and the setting didn’t make sense. I actually remember giving up on the game because of the writing, although I don’t recall the specifics.

I’m having a short break because I needed a fix of shorter games due to not having much free time, but I’ll be going back to it soon. I’m sure you’ve read what I wrote about it above, so I don’t have much to add at this stage. It’s a slow burn start, and if you prefer a stiffer challenge from the off, then you might want to wait until they patch in the difficultly levels they’re talking about.

I’ll post more when I get back to it soon.

I am about 50 hours in and still playing. It is a solid AA strategy game that hews more to the HOMM style than the style of the earlier Disciples games. But it does retain the more intimate army composition of the earlier Disciples games. Instead of stacks, your army is composed of companions and individual units. Some of these units are named and you collect them through quests.

The combat is on the easier side but the mechanics are accessible and easily understood. Best of all, the AI seems to play by the rules. Enemies flank when they get the opportunity. They buff and heal and target your weaker units.

The game is stable and I haven’t had any crashes or noticeable bugs to date.

Voice acting can be cringy at times and the story is fairly generic. But I have a fairly high tolerance for those thing so this is not much of an issue for me.