Another patch out apparently fixing a lot of crashes. 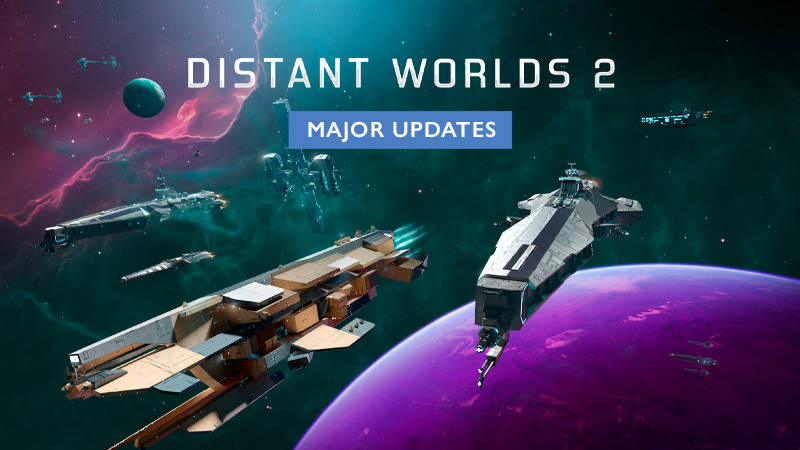 We are glad to announce the new Major Update for Distant Worlds 2, this update will feature many gameplay fixes and improvements to Fleet and Ship Behavior (including Fuel Tankers and Starfighters), the Private Economy and Resource...

Well, that is quite a patch. I’ll be really curious to hear whether the fleet mechanics overhaul is a fix or just a lateral move. But I consider it a good sign they realized the release version was basically untenable.

Any improvements to fleet and tanker behaviour are welcome and I will go over them with a fine-toothed comb when I start another game. But frankly I’d rather ships that run out of fuel wouldn’t be able to go to warp at all. That would solve a few problems as well as make more sense.

Looks like there is an open beta patch available now where have upgraded to a new version of the stride engine. Maybe I’ll finally try to give this a spin this weekend.

The latest beta seems to be getting very positive feedback in terms of stability, performance, and some visual effects improving. The few before for various improvements to fleet behavior.

And they’ve added one prominent developer in the modding community as an official developer. I think that is especially good news.

Personally, I’m still holding out for whenever they update to better manage multiple design per class retrofitting. Once they get that sorted, this will be at the top of my list. That’s after 60 or so hours near release that were mostly fun, despite flaws.

That is great if they added some help for Elliot. Even if it was nothing more than having someone to bounce ideas off of for fixes it would be good for him.

I still haven’t had a chance to play this since I got it on launch day.

Hey folks. Anyone still playing this? feedback on bugs etc?

I put this one on the shelf (in fact never played it) after I saw the initial feedback on this forum. Curious as to whether things are improving somewhat.

it’s up to 1.05.3 in beta, and i think it’s pretty stable. the game engine’s been upgraded (as part of 1.05) and performance has improved.i still like it, though i never finish it :)

Things are improving, but there’s a long way to go yet. There are still issues with the automation and things not working they way I expect, such that I don’t feel like I can trust the AI with the things I want to automate. As such, still not playable in my opinion. I do test it with each update though.

There are still issues with the automation and things not working they way I expect, such that I don’t feel like I can trust the AI with the things I want to automate. As such, still not playable in my opinion. I do test it with each update though.

Thanks for weighing in. This was my problem as well last time I spent any meaningful time with DW2. It’s just so frustrating that the game’s selling point is where it falls apart. :(

I did go back and spend a bit of time with DW1 after giving up DW2. My takeaway is that there’s no reason to play the sequel when the original game more or less works and the sequel doesn’t. If that ever changes, I’m counting on someone like you, @paradroid, to do the yeoman’s work and let us know!

I will! The reason I’ve been quiet in this thread is because as far as I’m concerned there’s been nothing to report - sadly.

Like you, I’m at a loss to explain why this sequel exists. If not for the graphics, this is a huge retrograde step in the series, made all the more frustrating because the dev seemed not to learn any lessons from DW:U.

It’s the little things. When you see a tanker, colony ship, freight ship etc not behaving properly, and then you consider how many of them you have in your empire and how you need this stuff to be automated because the game is far too big to micromanage, you realise it’s all still horribly broken.

I’ve almost left a negative review on Steam a number of times, because honestly it feels like the game deserves it and I should be warning people away - for now, anyway. I don’t know what’s stopping me.

You can always leave a negative review now and provide a caveat that it’s for the current state of the game and that the dev is still working on it. If it improves, you can change your review to a positive one. As a consumer, I find reviews like that to be helpful.

I thought feedback a few patches ago was that the private sector AI had improved - at least freighter, passenger ship and goods movement improvements were advertised in one patch that seemed well received.

I think the critical bugs and performance issues are largely resolved. My own performance was ok before and is very good now - although I do admit I haven’t played much since April. Since then I’ve mostly fired up a generated late stage game to see how performance has changed - it seems quite a bit for the better.

My own reasons for not playing much (more) yet are that I find it frustrating that the retrofitting AI for military ships gets confused by multiple designs for a single hull. Once they improve that (sounds like it’s on the list) I’ll be back into this full time. I really enjoyed my first 60 hours or so with it, until little UI annoyances added up.

Fwiw, the devs plan to publish an updated “state of the game” once the current beta patch becomes a public release - so probably within a week or two. The last such post in March was a roughly 3 month roadmap of major priorities for patches, especially bugs and performance. I expect the next 3 months to focus less on bugs, and more on AI, UI, balance, other QOL, and modding support.

I think the main issue with the original was the 32bit engine really would struggle the longer the game went on.

My own reasons for not playing much (more) yet are that I find it frustrating that the retrofitting AI for military ships gets confused by multiple designs for a single hull.

Oh yeah, good point. I thought maybe I was doing it wrong: this part was annoying.

I’m in a similar boat as you. I don’t know why this sequel exists or why it was released when it was. It is currently a somewhat less functional copy of DW:U with less content. Graphics and UI upgraded some, but not to any amazing level. I loved the first DW, I’ve shelved this one.

Space combat can be a big improvement but right now it’s just weird. My modded Stardrive blows this game out of the water, never will understand why anyone want to play this over that. Both DW are wide but oh so shallow.