I bought this because the fonts in DW:U were too difficult for me to read. But I stopped playing this soon after release for many of the issues cited above.

Swing and a miss but there are still innings to go.

The UI being scalable is a huge plus in the new version, but other than that there’s not much reason to recommend it over DW: U. What a waste of $60. But, lesson learned on buying into hype from people who have barely played the game I guess.

I think it makes a lot of sense to feel wronged if bugs or performance were ruining the experience at launch. The performance at release, in particular on AMD systems, was inexcusable. I was part of the beta and it wasn’t caught there, but was a huge issue at launch.

But for everything else, I think it’s buyer beware. The game was obviously old mechanics in a new engine, with no advertising at all (?) of anything new beyond that. There were plenty of let’s plays and other previews that made it clear this was the same DW formula.

For me that is fine - I’ve posted here and on their forums that a new engine and better UI were enough to get my money at 1.0. I’m hoping the official updates and mods take us well beyond DWU, but don’t feel wronged at all by the feature set included at 1.0.

Sure, buyer beware on everything, and luckily I’m in a position that wasting $60 isn’t much more than an annoyance.

For me, DW:U with scalable UI would have been enough to make it worth it, but they’re not even close to that. Even bugs, ‘design decisions’, and performance issues aside, there’s just a complete lack of content. There are what, 7 playable races? And that seems to mostly stem from the decision to add custom story content to each race, which isn’t what anyone is coming to DW for.

There are what, 7 playable races? And that seems to mostly stem from the decision to add custom story content to each race, which isn’t what anyone is coming to DW for.

This is a fair criticism. I think a much better use of time/money during development would have been into:

I think they made it clear on the matrix forums at least that it would initially have less content and features than DW1 which had gone through numerous expensions by the time DW:U was released.

Thanks for weighing in. This was my problem as well last time I spent any meaningful time with DW2. It’s just so frustrating that the game’s selling point is where it falls apart. :(

I did go back and spend a bit of time with DW1 after giving up DW2. My takeaway is that there’s no reason to play the sequel when the original game more or less works and the sequel doesn’t. If that ever changes, I’m counting on someone like you, @paradroid, to do the yeoman’s work and let us know!

Is there any reason to play DW1 if you pretty much hate DW2?

I’m pretty much willing to give any 4x game a second shot. In fact, I started a thread “Games that are worth a second look after patching”, which directly led me to discover Sword of Stars, which I loved.

In the case of DW2, there is so little I liked and some much I hated, it will take a sea change in opinions to give it a second look.

A game like this with a single developer could have really benefitted from going the EA route instead of what they did. I don’t think Matrix does EA though. I’m not sure why.

DW1 was also a mess at release which is why I never even considered buying this one. Maybe I will after an expansion or two if it’s on sale.

This is such a shame. I think that I’ve completely given up on this.

I don’t think Matrix does EA though.

They certainly have a very particular way of doing things - I wish they did EA also, as well as were willing to scale up the team.

I really like the game, but I think the one man approach looks more stubborn and tarnishing a valuable franchise (for now), as opposed to renaissance man level development. I also wish they had better outreach - a dev update on patching priorities every three months is so incredibly threadbare. I don’t need weekly, but at least do monthly!

My modded Stardrive blows this game out of the water

Which Stardrive, are you playing 1 or 2?

And what mods are you running? If you say it’s great I would give it another try.

Not sure what Janster uses but I have found the Black Box and Combined Arms mods for StarDrive 1 to be very good.

Browse and play mods created for StarDrive at Mod DB.

Pretty sure he is talking about that.

Yes, both mods needed, for an amazing experience, just compare the combat of Stardrive to DW 1 or 2, its not even same ballpark. I don’t mind combat of DW 2 though, but rest of the game is very stiff…

I just reinstalled my vanilla Steam Version of StarDrive and get this error message. 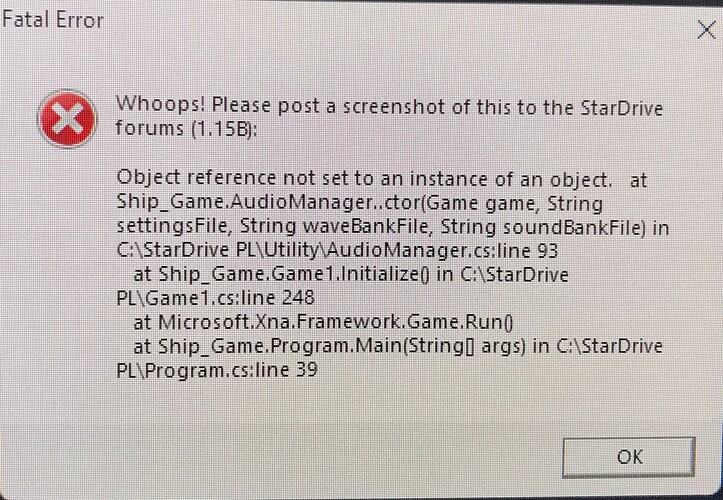 EDIT: A post in the Steam discussions reveals that the Steam version does not work with Windows 11.

I am pretty sure i have run it on my w11 system. I will double check this afternoon.

Edit: I should caveat that with it was almost certainly with the mods installed when id did it

I did a fresh install and then installed the mod but no dice. Hopefully it works for you @Fenris99

And now back to our regularly scheduled channel

Never had a problem with my windows 10, but I have no experience with 11 sadly, and will not touch that with an iron poker until it offers something more useful than less compatability.

I wonder what the difference is: 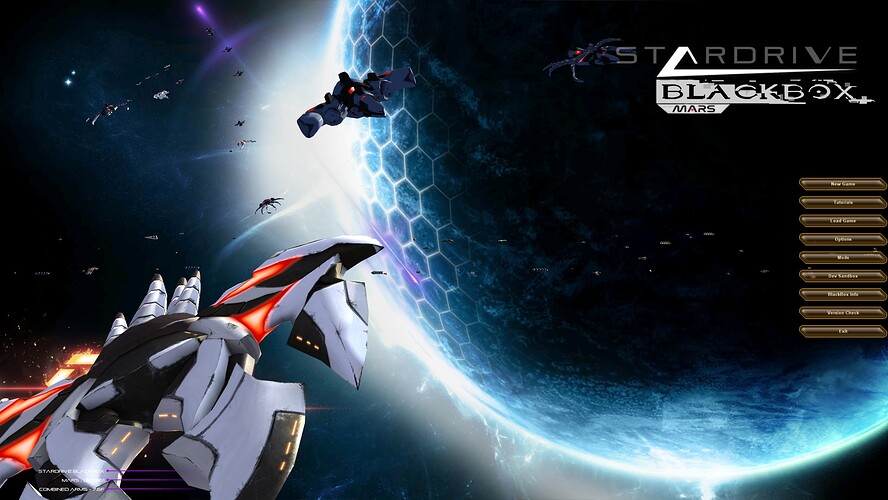 I guess I timed it just right to where a ship is blocking the combined arms logo as well.