That’s a good point too! If the community is there with the talent needed…

I’d agree with you - if the base game was abysmal (as it was until a month or two ago). But it’s in great technical shape now, and I think improving mod management would pay enormous dividends on the content and balance side. There are already a few good balance mods, but they are deeply buried in an obscure forum and not easy for your average player to install, update or manage with other mods.

I guess it depends on how long it takes. If Steam Workshop and multiple mods at once functionality takes 6 months of full dev time - yes, save it for later. But if it’s a few weeks - please, this should ocme now, before dealing with an “mostly rare” edge case of odd ship behavior, which could be an endless rabbit hole.

i’m having a blast with the current iteration, and looking forward to getting some more races into the mix. DW1 was my goty, and DW2 is now also. i just wish @BrianRubin would put it back on his biyf list

I just started playing it yesterday to see how much better it is.

I’m happy to see that they finally added another developer to the team to help Elliot out with the workload.

I still haven’t really dove in yet, but I hope to soon.

Well if Brian gives it the thumbs up, I may give it another shot.

One thing, I’ve learned is that developers can fix broken games, but expecting them to do it in a month or so is unrealistic. It is been two months so maybe…

I think RimWorld had it right. The developer works on big mechanics and systems additions and updates, and has rare but thorough passes at balance of values within. The community uses the ample modding capabilities to fine tune every value (e.g. weapon damage and range, costs, etc), and iterate some mechanics which the base game may eventually adopt. Good model for a very slim development team with a very big fan base.

Get the base game as good as you can make it, THEN add ways to break it

While true, because otherwise people won’t bother anyway, it’s not something you just add without laying some thought and groundwork.
(unrelated to the game… eventually I’ll get to it)

I’m going to dive back into this game again. Original DW was my GOAT but I didn’t feel that DW2 improved things enough to really warrant my love for it (yet). Yes it was more shiny and pretty but the game mechanics didn’t seem different enough.

Perhaps this the problem with a “perfect” game… how do you improve it?

Real progress, as far as what I want, is happening much too slowly. After just a few hours into the game, I went on the forums and proposed a ‘three strikes and you’re out’ rule on those spammy requests, ‘gift this civ $341’ for example. Just now are they thinking about putting in a ‘don’t bug me about this again’ checkbox. Ditto for shift-queuing orders, to help ‘manual’ players, as if that won’t help me, who plays with a lot of automation. Still waiting on that 2nd major patch.

What’s the update or list of updates that you most desire to see in the game? Is it missing from their recent roadmap?

(I’m unclear if your two points above are it - those are both on the roadmap?)

Yes, i saw them both in the roadmap. I’m just sad they didn’t get implemented more quickly.

This got a big-ass patch today with some major revisions: 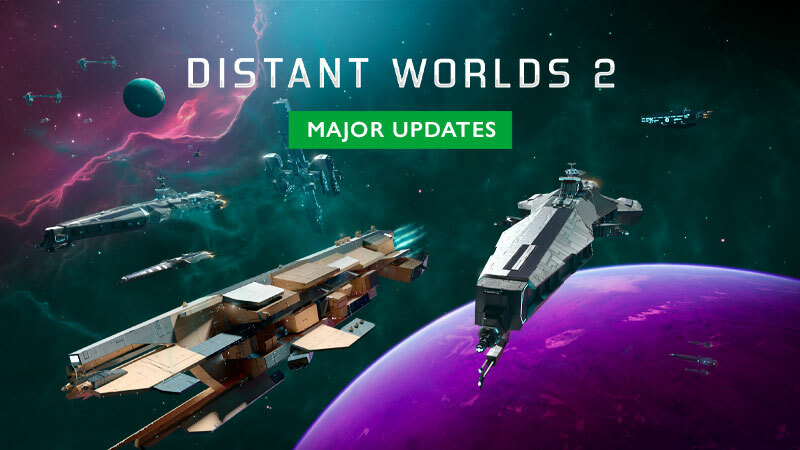 “Pathfinder” 1.0.8.3 Official Update This massive update takes a series of steps towards completing our current roadmap to both fix reported issues with Distant Worlds 2 but also to improve a variety of gameplay areas as part of ongoing post-release...

From the intro to the notes:

…for this update, we have significantly improved and in some areas redesigned Research, Diplomacy and Reputation, Subjugation and Wars, Colonization and Migration, Performance and Memory Management, User Interface, AI and Ship and Fleet Behavior.

Anyone here still playing? I’d be curious to hear how much of a difference it makes.

Anyone here still playing? I’d be curious to hear how much of a difference it makes.

I’ve still been holding off until I get the all-clear (and maybe coinciding with a sale if I’m lucky!) so I’m also curious!

“Still playing?” I haven’t even really started playing this. Figured I’d give it some time to settle down first, and it looks like that was a good plan. Now I’m too into Cyberpunk 2077 which feels more like a post-apoc 1980’s but with more doodads for some weird reason. ;-)

I’ve played a bit of the earlier beta, around 1.8.1, and it did seem like a good incremental improvement since my last try in the summer. Performance much better, seemingly better diplomatic AI. I didn’t really notice the research changes so much, although short of a total rebalancing I tend to gloss over that fine detail. (There is a good total rebalancing mod on their forums.)

The only reason I’m not playing just this is the retrofitting annoyance - which only matters if you like having multiple manual designs in a single role (I at least want the option!). Once that is sorted this will be my only space 4x for a long time - already is, I guess.

I still really haven’t dove in yet as well. I guess maybe now should be the time.

i’ve been playing it obsessively and it’s (baring the extra races) now better than DW1. much more of a ‘game’ from my pov. great game

Interesting. I felt it too close to DW:U (which I sank WAY TOO many hours into) and not really a good use for my gaming time.