Do you bicycle? A cycling thread I guess

I’ve been trying to get back into cycling to work after about a year or more break. Haven’t cycled to work since moving to my new place in a much hillier part of town. Finally decided I wasn’t going to let something as stupid hills stop me and it turned out not to be so bad.

So what’s up Qt3? Do you cycle? Commuting or recreationally? Professionally?! What do you ride?

Hells yeah! Started road cycling recreationally late 2012. All seven blokes in my office are cyclists to varying degrees, some compete in the odd iron man/triathalon. I am not quite that dedicated but try to do 100Km/week. A goal I have sadly neglected for too long on account of a torn meniscus in my right knee.

Actually got back on the bike three days ago to rectify that! Went too hard, of course and smashed myself, but I have been on the bike everyday since, well on the stationary anyway.

Bike is an Amiata Trieste. No-name brand from a local bike chain. Chinese carbon frame with a decent entry Aksium wheelset. Saving grace is the Ultegra Di2 groupset. Got it for a song as it turns out people shopping for Di2 don’t want cheapish Chinese non-name frames, so they were on clearance. Got the entire bike for less than the cost of the groupset alone. 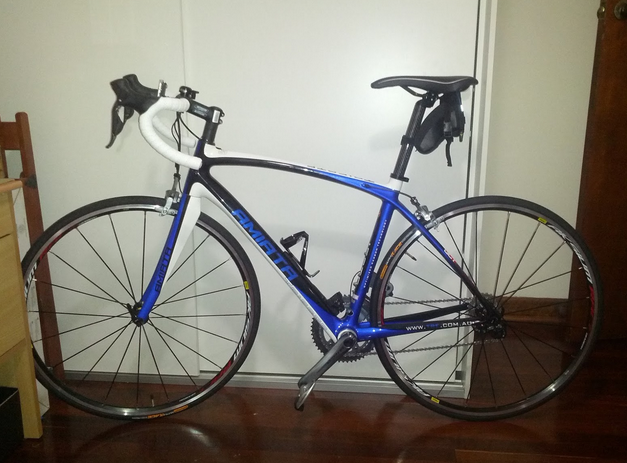 Perth’s pretty flat in general, but longest ride to date was competing in the annual 3 Dams challenge - 150km, 1,800m climbing. 7 hours on a bike! Woo! 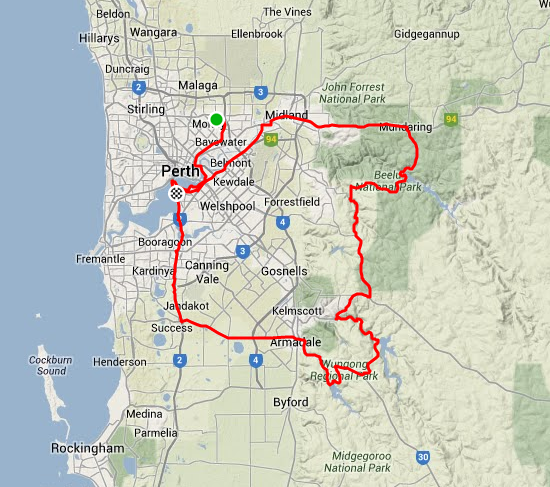 And this is what it does to your heart rate!

Then there’s the runabout as well for trips to the shops or lazy commutes. Cheap second hand single-speed, upgraded with bullhorns, TT brakes and some SPD clip-ons: 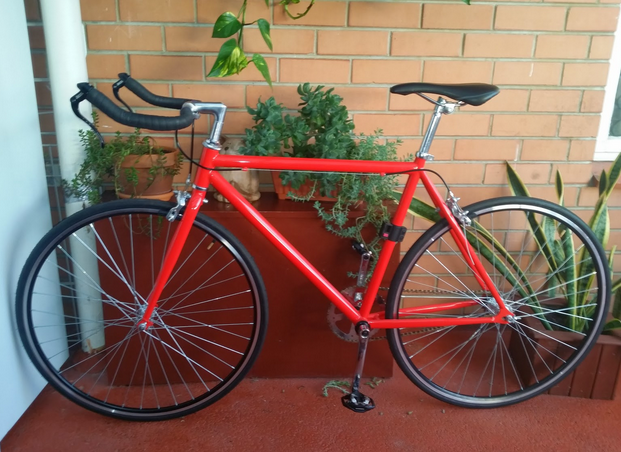 I commute by bike to work, about 45 minutes each way in NYC. Occasionally hairy, very fun. It’d be faster if I wasn’t on a folding bike. I like its maneuverability though, and the way it tucks into a corner of our living room.

Perth has some pretty awesome place-names.

Is Rockingham as cool as its name? My commute is only 5km, sad I know. And I make it on one of these dumpy badboys: 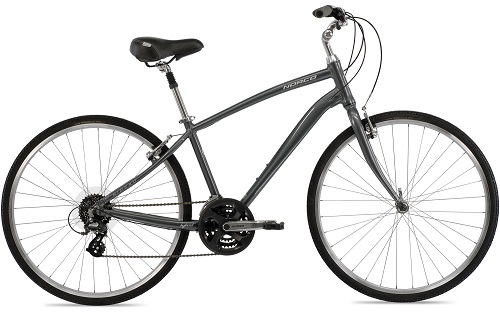 With fenders and a pannier rack, obviously. I bought it when I knew a lot less about cycling. I’d like to get a road bike soon, but I can’t afford it or justify it right now. I don’t do any real recreational biking right now but I’d like to start. Was thinking about a smallish ride this weekend because I am hilariously out of shape.

I commute on a bike but my ancient knees are getting balky on the hills. I’m thinking of getting a Trek bike with pedal assist – a small electric motor that adds power everytime I pedal. I tried one out at the Trek store and man it was fun. Here’s a link to what I’m considering.

Across town or across campus, Trek's electric-assist FX+ takes you there with comfort and speed. Trek starts with a light, nimble-handling aluminum frame, and a wonderfully comfortable upright...

What I find is when I work a long day and have to ride home, which is more uphill than the ride to work, I am often discouraged to ride and bail out and get picked up or catch the bus instead. We also live in a hilly area so riding for fun isn’t all that fun.

Mainly, though, I use the bike like a car. My friend works from home and I’m just a few miles from work so we really don’t need two cars. Biking is a nice solution for me but the steep hills are a drag.

Had a Trek road bike that I would ride about 15 miles round trip to the beach. Always tried to ride a little faster every day, and even get the timing on the stoplights right so I’d end up covering the same distance almost as fast as the cars. Then it was mountain biking, which was a lot more interesting to do, but hell if you just wanted to get from point A to point B. Now? I’m old and in a very hilly area that just has too many steep climbs for me these days. I’ll borrow my son’s electric bike and just do it the lazy man’s way.

Yeah, the electric bikes are supposed to really help with the hills. The user reviews I read for the Trek bike all said it flattened the hills. It has four settings – +25, 50, 100, and 200%. I tried it and put it on 200% and I was really flying when pedaling. What I like is I still have to pedal, so I still get some exercise, just not as much. My hope is that it will encourage me to ride the bike more so I may actually increase the amount of biking exercise I get. I really enjoy being on the bike when I’m not laboring on hills.

I did more mountain biking when I lived in Newfoundland and could actually bike to, you know trails and mountains. Where I am now if I wanted to do any real mountain biking I’d have to drive my bike someplace, which is difficult since I don’t have a car. Anyway, I sold my MB a while ago to my girlfriend’s brother.

I’m a road cyclist, currently ride an aluminum bike, thinking about a carbon one. Last Sunday I did the Becel ride for heart with 14,000 other riders. Most weekends I go with a small group of friends northwest of Toronto and do about 80-100km. Cycling in all forms is awesome. Just wish more drivers would know that.

Wow, 14,000 riders in the same place at the same time? That’s crazy. Doing 80-100km in a trip is totally unfathomable. How long a trip is that usually?

I used to ride around Austin on a 1980s fat seat bike, heavy steel frame, six speeds, the kind of cruiser that gives you fully upright posture. I literally used to ride in the baby seat when I was a few decades younger.

When I moved to Seattle, I finally got a real road bike. It’s a sexy brown Raleigh with retro orange & white paint accents, 18 speeds, manual shifters at the end of the drop bars, matching fenders, and I’ve put bags & proper lights on it. I even wear my helmet up here.

I still drive a lot, but my bike is my primary vehicle for most things.

I’m finally returning to Mammoth next month after several years of not being able to make it. I used to arrive about 2-3 days before they opened the bike trails to get acclimated to 9,000 feet, and then ride over the pass and take the long, long (longlonglong…) downhill to the Devil’s Postpile. I’d see newbies trying to ride the trails at that altitude on the first day collapsed alongside the roads.

I’d probably be joining them if I tried now. Just have the camera and sketchbook these days…

Hellz yes. I road bike over 100 miles a week. I just upgraded and spent more on my new ride than many folks spend on good (used) cars.

I have 2 Cannondales now. My older one is aluminum. The new one is their Synapse Black Inc. Hi-Mod Dura Ace. All carbon, even the wheels.

I’m jealous. I’m saving for a road bike, but I’m pretty sure the high end stuff will always be out of reach for me. Going to take me a while to save for even an entry level road bike.

Going to go on a big (for me) trip this weekend of a whole 15km. Baby steps! Have a route planned to one of the nearby beaches.

This made me laugh.

I’m trying to get into road biking. I have an ultra-fancy carbon bike (BH frame, Ultegra everything, etc.) but I usually just take out my cheapo Giant so I don’t have to worry about it. I always say that you should figure out what you enjoy and do that, and then do it a bit more every time.

I’m trying to get into road biking. I have an ultra-fancy carbon bike (BH frame, Ultegra everything, etc.) but I usually just take out my cheapo Giant so I don’t have to worry about it.

Break that habit dude, it’s there to be ridden and I’d wager it is a much nicer ride than a lower-end Giant.

Wow, 14,000 riders in the same place at the same time? That’s crazy. Doing 80-100km in a trip is totally unfathomable. How long a trip is that usually?

Yeah, that is a lot of riders in one place. We have an annual 60km ride up one of our freeways which attracts ~10,000 people. The major problem is there is a wide variation in skillsets and experience. If your a group looking to go fast in a ride like that, it can be a recipe for disaster. Last time they ran the event in 2013, the 60km start was delayed, but they did not delay any of the other starts. 20km, 10km, 4km starts staggered along the same route so they all would finish within a reasonable time of each other. By the time the 4km start was away (Mums, Dads, young kids, training wheels, etc), the fast riders from the delayed 60km were still coming up behind them, instead of already passed. Very lucky there were no serious incidents.

An 80km ride will take anywhere from 2-4 hours depending on skill, fitness, elevation profile and of course, how hard you are pushing. A typical flatish 70km ride with around 500m climbing I’ll average between 25-30km/h, which takes around 2.5 hours. Same distance in the hills with 1000+m climbing will be more like 3.5 hours.

I’m trying to get into road biking. I have an ultra-fancy carbon bike (BH frame, Ultegra everything, etc.) but I usually just take out my cheapo Giant so I don’t have to worry about it. I always say that you should figure out what you enjoy and do that, and then do it a bit more every time.

When I got my bike (which at roughly $1000 invested isn’t as fancy as any of the other road bikes in this thread, but it’s much nicer than the $100 used touring bike I keep as a backup for emergencies), I promised myself that I would never treat it like something to worry about like it was the end of the world.

So far the results have been improved quality of life, plenty of use, and yeah, a lot more wear & tear than it probably would have seen otherwise. I’m happy with my decision.

What a perfect day for me to notice this thread for the first time! I’d been having a lot of issues with my bike switching gears awkwardly getting locked up and such. So today I dug out my copy of Zinn & the Art of Mountain Bike Maintenance and learned how to give it a really good proper cleaning and tune up. Spent several hour cleaning gunk out of the drivetrain and lubing up the chain, which I apparently don’t do nearly enough. It rides 10x better now!

Any mountain bikers (or I even road bikers) ever do a bike tour thing? I’m in dire need of a vacation and I’m eyeing up a trip to Canada (BC) and around Glacier National Park next month. I’m not sure yet if I’m good enough or in shape enough to hang, nor have I considered the logistics of getting my bike there and back, but it sounds amazing