Watches have become something of a rarity nowadays thanks to the advent of cell phones. I’ve gone long periods without one myself, but I’ve found that I like them. Not only can they be classy, but you have a more ready access to the time. Most of the people around me forgo a watch in favor of using their phones, but these same people end up asking me for the time instead of getting out/looking for their phones, which says to me that they’re constantly doing something that they’d really rather not be doing, and I feel the same way when I don’t have my watch.

So, what about you? If you wear one, do you go for the classier, more dressy watches or the more utilitarian rugged ones? A watch with a bunch of functions? A cheap piece of crap? Or are you anti-watch and want to make fun of us for using obsolete technology?

I tend to go for the tougher ones, myself. One ancient Casio G-Shock, which is ugly and apparently nearly indestructible, and the other a Victorinox Swiss Army Renegade, which is just as tough, simple, analog, and a lot nicer looking.

The Casio, which my dad gave to me after having it for years, has been beaten all to hell to the point where the band has been replaced by a neoprene sports band and its protective black plastic has broken off revealing the grey metal underneath, and it actually improved the look of the thing. A girl told me unsarcastically that she thought it looked classy the other day. I have a fondness for it, but I do prefer the Victorinox - I really like Swiss Army Watches and at some point I’d like to check out some of the more expensive ones.

I wear one, but only at work where carrying around a cellphone is frowned on, though not banned. I prefer not to carry my phone while working anyway. Besides, it’s quicker to glance at a watch then dig the phone out, even if it’s in my pocket.

I have a nice Seiko watch, but I wear cheap metal watches with an actual clock type face on it. They only last 2-3 years, but at $10 a piece that’s ok. In fact, I just bought a new one after something fell off a shelf and shattered the clear plastic lens the other night.

I used to wear through worn watches wretchedly and repeatedly.

I have quit being so hard on my watches and now wear one almost every day to work. But basically regular mens watches…nothing fancy or more than $60 or so, because I know I’ll just scratch it to hell and back one of these days.

The last time I wore one, the calculator watch came in one variety, and it was gadget-y for its time. I haven’t worn one since, even though I didn’t have a phone until recent years.

My watch is a basic digital watch. I try to find watches that don’t look like they belong on Batman’s utility belt. That can be pretty hard (at least the last time I looked) if you are budget conscious.

No. I hate the feeling of a watch encumbering my wrist. I also have a clock on my cellphone, so I don’t actually need a watch to tell time.

I wear a Seiko watch I bought about 8 years ago. I would guess it falls into the nice and classy category. I wore it pretty much the whole time for the past eight years so it does show signs of wear. I guess I like it for the looks and just because I have always worn one and like it to be able to tell time. I don’t need all those other functions of a such as gps or a chronograph, I just need it to tell me the time and that’s it.

I wear a Perpetual flying tourbillon watch to work.

Gives me something to look at when I have to sit through boring meetings.

I also have a vintage quarter repeater pocket watch, but I only wear that to work when I wear a sports jacket.

I agree with William Gibson on their appeal:
“Mechanical watches partake of the Tamagotchi Gesture: They’re pointless yet needful, comforting precisely because they require tending.”

Not really a fan of quartz watches though I can appreciate the high end quartz ones that auto calibrate to atomic clocks based on radio transmissions. Most of those work mainly in the USA though.

Why would you do this thing? Wrong word in title, must smash puny word! SMASH!

I either wear an unreadable LED Tokyoflash watch

I need a watch for work but don’t really like actually wearing one.

Got a couple of watches that seem to spend most of their time being broken and I’m fed up getting them fixed.

Got a Seiko Kinetic somewhere that costs £100 every other year to get working again which makes me just wish that I got the battery version as they only cost a couple of pounds to replace.

Also have a Suunto Stinger dive computer but that seems to have packed up again and also costs £50 to get the batter changed.

I’m on the lookout for a nice watch at the moment but so many of them seem to feel the need to pack the face full of dials and whistles when all I want from a watch is to tell the time. I’ve been on the lookout for a new watch for a while. I do like a couple of the Tag Heuers jut not sure I want to spend £1,000+ on a watch.

What is up with using “where” instead of “wear?” I’ve seen this twice, today, on two different message boards, and I don’t think I’ve ever seen it before.

Anyway… I wear one of these: 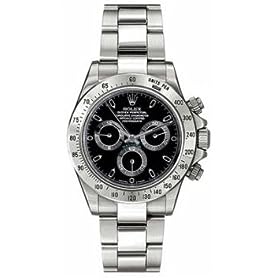 It… costs significantly more today than it did back then.

Omega Speedmaster Professional, I have the 3750.50.00 model and wear it every day.

I also have a Chopard Mille Miglia, a discontinued steel model that is broken (by my father, who got it wet), and costs more to fix than its second hand value.

Back in the early 90s, I guess, my aunt got me a simple Timex watch. I’ve kept it ever since, and it is the only watch I have ever owned. I wear it when I am going anywhere that I might need the time. Yes, I could check my Ipod or my phone, but that’s not as convenient as a quick glance at my arm. Plus, I use my watch when teaching, so that I know when to end class.

I have an Armitron automatic skeleton watch at the moment which is a good looking watch that gets a lot of admiring comments despite only costing about $120.

I stopped wearing a watch when I began carrying a cel phone.

I’ll stop wearing a watch when I start carrying a cel phone.