Dominions 5 - Born to be Van Wilder

So… Caelum, Lord of the Cold Peaks, Master of the Frigid Breezes, casts… ETERNAL PYRE? FIRE GEMS??
This game is very strange.
And yes, to answer your unasked question, I have considered the ramifications of plunging the world into eternal darkness, but that would take about seven turns or so to get to. The death gems, of course, are not an issue.
I am just amazed that I am not the only fire user (besides Ubar of course) that is in this game.

a Dom5 mystery to me continues to be who moves where first:

The order on ties I think used to be based on nation number, but now it is random? Eg: resolution of battle when two opposing armies hit the same indy province. It would be that Ermor would go first, then Pangea because Ermor had the lower nation number. But I suspect that has since changed.

Another useful tip that I remember reading about, maybe on these forums, is that the order of messages when you open a turn is based on turn order.

Maybe the IPA’s were freezing (and being ruined) and they need just a little bit of warmth for that deliciousness to flow down their throats.

ah great! that make so much sense! (viz friendly and unfriendly). finally!

Turn resolution order (from the manual):

what? We like BBQ. Just like you probably enjoy a nice frosted beverage in your heated realms. Opposition is often tasty and delicious.

Jeez, thats a lot of elements, as well as Insanity and aging specifically heh.

Bear force turn went…really well… Weird. I am so terrified of birds from those seasonal ones guarding the thrones, I am used to them being unkillable.

But the true test is next turn! Come and fight me on the capital Strato! it will be a battle worthy of Bearhalla!

Speaking of Death Rides to Bearhalla, I will be out till Thursday PM EST. Yet another opportunity to wear my black suit at a funeral…

I might be able to get (another) turn in within the next 16 hours or so, depends what our travel/packing arrangements turn out to be, if it does cycle during that time.

My turn should be in soon, I won’t need extension, just working through assignments at the moment.

you clearly aren’t getting my mental telepathy imploring you to enter your turn so i don’t have to go to bed just yet. Oh well, guess i will just head to sleep then…

Yeah sorry, I had these two assignments that just left me mentally drained.

Anyway, turn went in, and I’m coming for Rus. The walls are breached and I’m ready to go…

's all good man. Just means i get to unwrap a new turn this morning instead. It’s like xmas!

I am also ready to go! This will be a big battle so for sure I am hyped to post screenshots.

[my secret hope is to win! but worst case I hope two units specifically do two things!]

The Good: Got my turn in, and got a scout in place to watch the fireworks.
The Bad: WTF, I am behind in research! ETHER LORDS!?!?!
The Ugly: Have you seen my scout imp?

Ether lord technology has existed in the realms for quite some time now. I’m more curious about the cost of them. I mean if you’re dropping 90 astral on a handful of ether lords, why aren’t you putting up some globals?

A 90 gem punt that would give a useful path no matter what. In this case, blood which means great utility in a communion for reasons.

[my secret hope is to win! but worst case I hope two units specifically do two things!]

Now I want to know what your two units were meant to do. I knew exactly what I needed to do, and I think my losses were pretty good.

Hey Rus, I can’t really recall what our formal relationship is - i believe we just agreed to a border, is that correct?

Ermor, not really related to that or anything really, but i’ve got some troops returning home stealthily through some of your new territories over the coming couple turns. It shouldn’t be a big deal, as i dont think you’ll find them, but just in case you do, it’s not a prelude to war or anything - you just moved very fast. 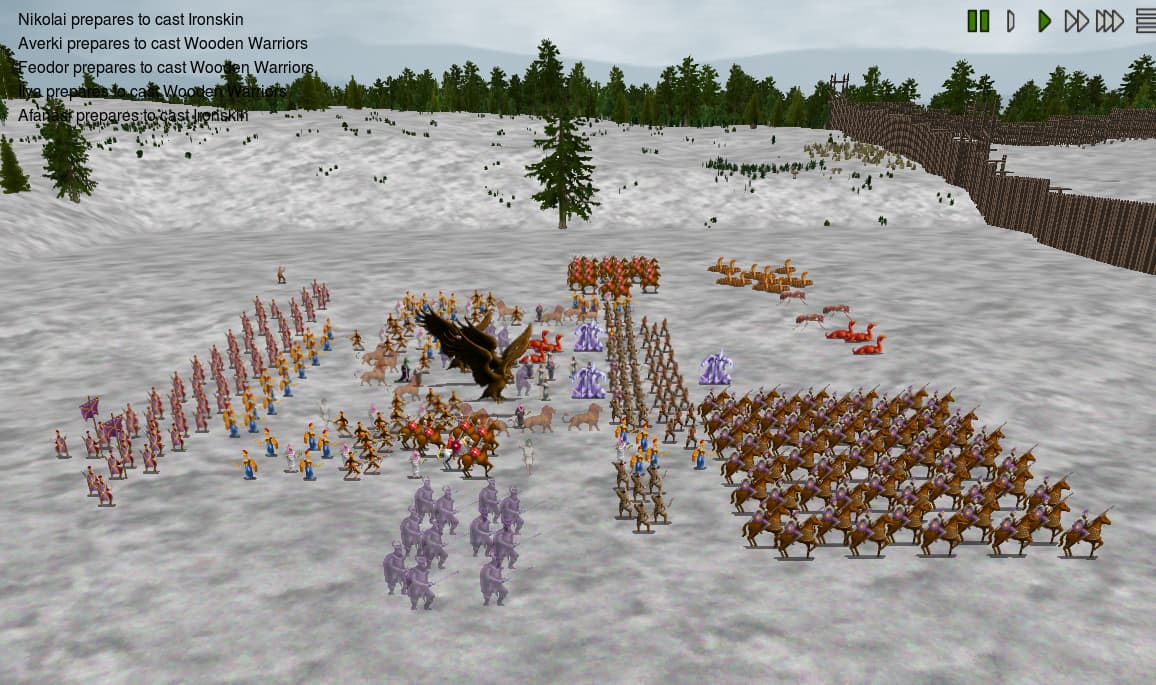 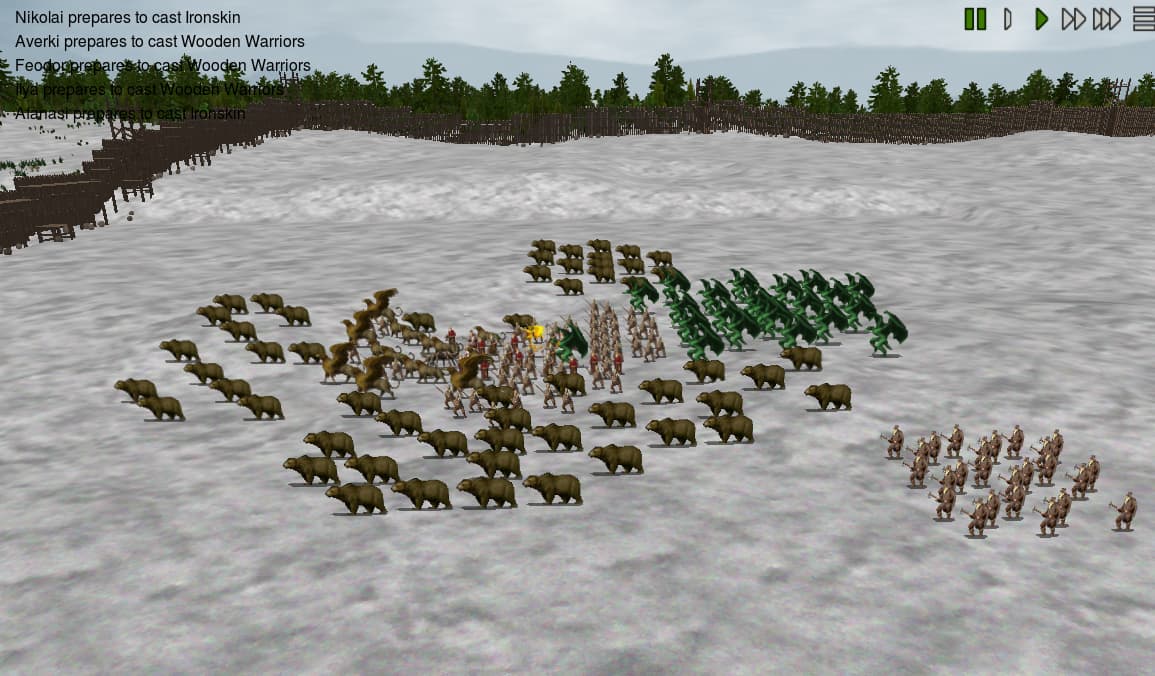 My plan was to rely on the bears delaying for a while as my fireballs and nature chaff cut away your weaker back line- with my main worry being the Cavalry.

Sadly with fire going well… your Fire Drakes decimated my bears as they tried to gum up your good cav. 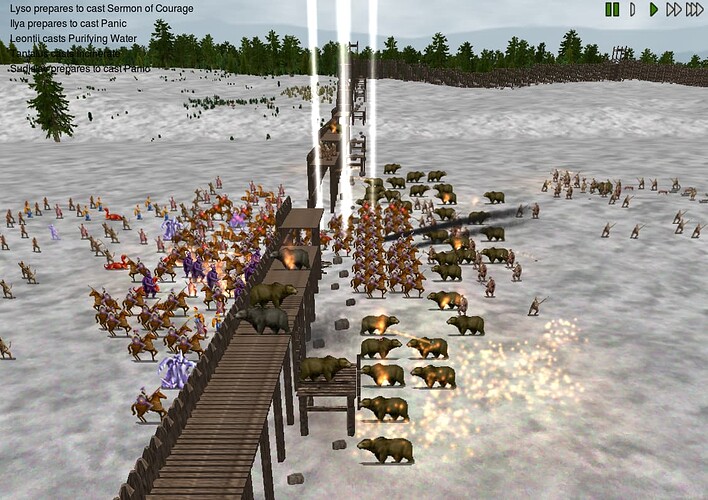 So the delay…maaaybe worked a bit- but my offense idea really did not work. I probably should have gone more into thunder priests than the fire mages, but I was low on money for a while and thought to shore up with the Shapeshifters rather than pay 250g a turn for the Thunder Priests.

Well played :D and was a goood match for me!

I don’t mean this to sound like I’m better than what I am, but I could read your tactics when I was thinking about busting open the fort. There was a limited toolkit available to you, and I couldn’t imagine there’d be much in terms of battlefield wide spells you could use, especially with the magic skills of your mages. Even if you had fog warriors and/or mass flight, I don’t think it would have mattered.

The gate is always the killing ground so when I submitted the turn, I decided at last minute to move the Equites of Sacred Shroud to the front in order to push through the gate as fast as possible. I also knew the Draconians were lurking around, but I tend to have bodyguards for my mages now anyway. The gladiator units are great for that role. Little bit expensive, and once they face battle, they’re gone, so useless for long campaign. But when I gathered my forces for the push to the capital, I knew this would be it. The other reason for switching cav and my line infantry was also a result of the Draconians, to deal with attack rear orders. Why have my cav wasted on those units when they can tear through bears. So yeah, hope the mage casts fire resistance at the front, let the cav go to work and trust in my victory. Those skinshifters still do a lot of damage though. To lose about 20 cav with high protection is indicative of the power of those battleaxes.

Fire Drakes, I know why @Kelan loves them now. I never liked them myself, but they’ve done a lot for me in the game.

Oh yeah, I was also nursing a 3HP prophet too. I thought about sending him running back home :D