Dominions 5 - Pretender to the Throne!

I added 24 hours to the clock. I lost track of time, but I’ll have it all done by tomorrow.

@Kolbex has less than 2 hours to submit Atlantis’ turn. Do we need to add some hours?

I think I need 12 extra hours. That should let me get it down by tomorrow evening.

So, I completely lost track of time today. It was busy. I added 24 hours to the clock. I’m sorry about the delay.

So, you know how @pyrhic was warning you all that I would win in about 6 turns, like 3 turns ago.

Well, I have some bad news. I currently have 4 thrones claimed, and if you don’t know, I’ve just taken 2 thrones from Arco this turn (you can see two of his thrones turned neutral). Anyway, I will be claiming those 2 this turn… as well as the Throne of Pestilence, which I’ve been sitting on this who time, but failed to collect because its not a good throne for me.

So, this turn, I’ll grab all 3 thrones, and get the required 7 thrones.

Unless someone has a strategy that will undo everything this turn.

I missed that you had an unclaimed throne and figured you’d need to either grab my third (or more likely blitz someone else’s) to claim your seventh. That’s fine though, time to put this tortured game to rest.

It didn’t seem that bad. We had some slow starts, but I think everyone got to try out some interesting things, and the game was relatively fast.

Honestly, I was thinking worried you would air drop your titan in one of the castles, and just hose me down in one of fights, so that I would need to move my main army forward.

In any case, I’ve been thinking another disciple game might be in order, but just 2 players per team. Something with at least 10 or so players. More if we can handle it.

I would be down to subordinate myself to a more experienced player, for sure.

I had fun with this one!

well done @legowarrior ! saves me from breaking the 3nap ;)

The game isn’t over until this turn is turn in.

And, I would have accepted a NAP at this point (or even a bit earlier). In the end, NAPs should be honored, but not at the cost of the game.

I would love to see some detailed AARs from people, to include their Pretender build with scales, their research philosophy, when that went out the window, their bless (if any) and general concept.

Followed by initial contact, what that created in research and production, and then what happened from there.

Please, its for the good of the children. Or something like that.

it was a fun game in many respects

Congrats lego. I will likely sit out a disciples game. I’m having trouble re-introducing life into a post covid world and reliving this bit of time pressure will help with that. I’ll keep my eye on the community and play again soon.

congrats lego, i’ll have more comments later when i have some time. But for now (in the shots below, bog and vaet are nearly identical colors, so i’ve added bogarus’ name closest to the line which is it): 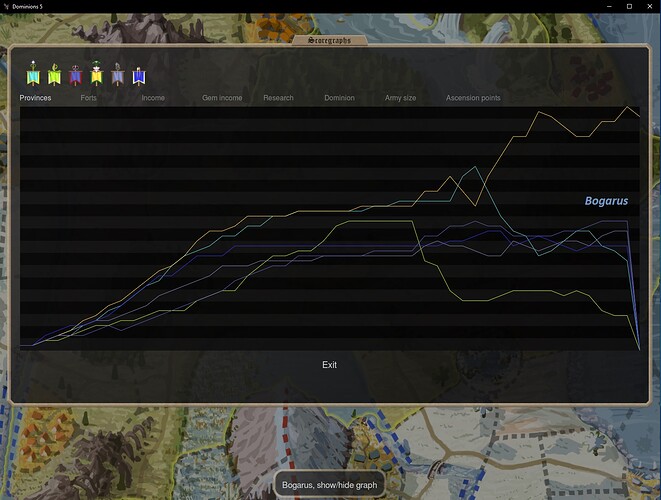 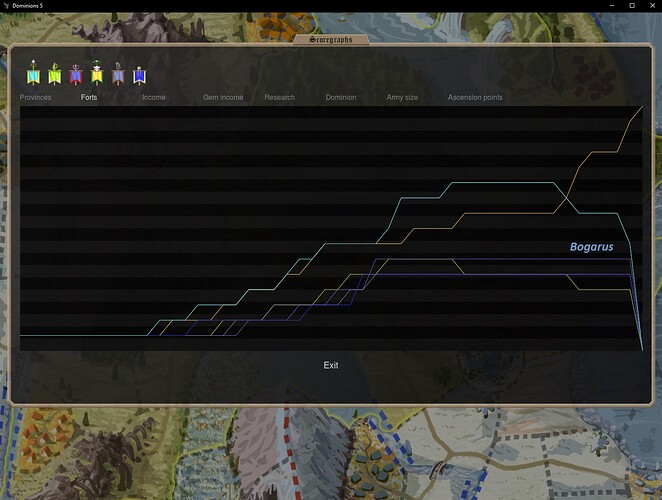 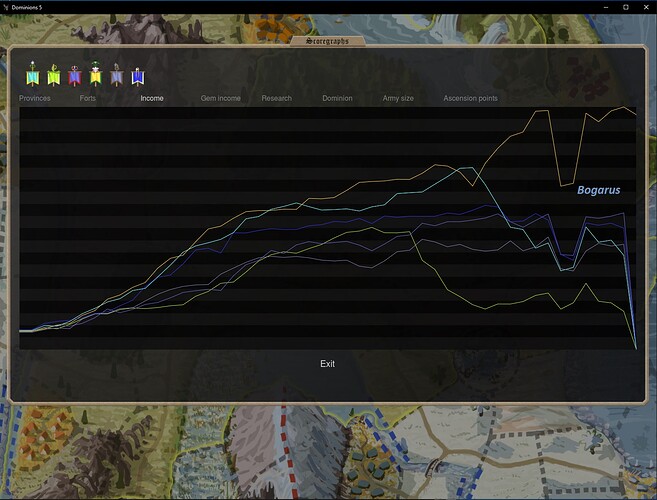 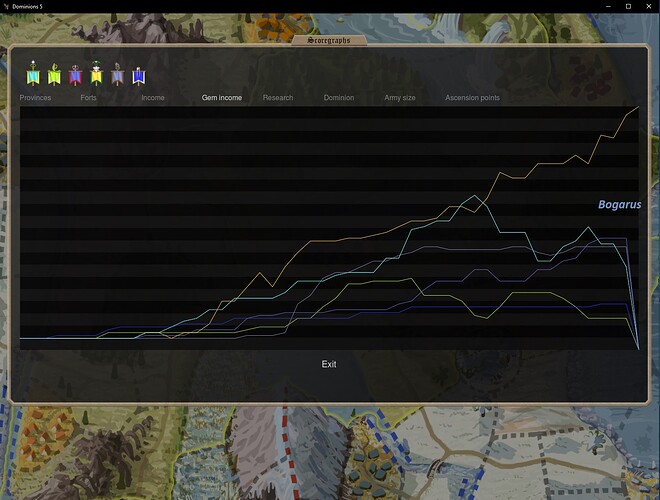 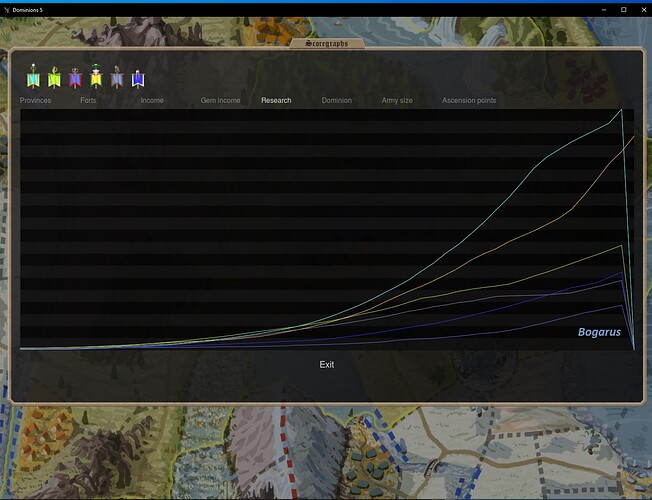 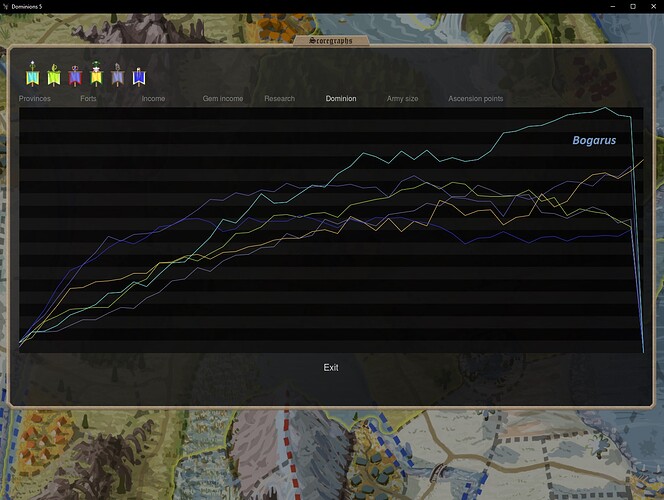 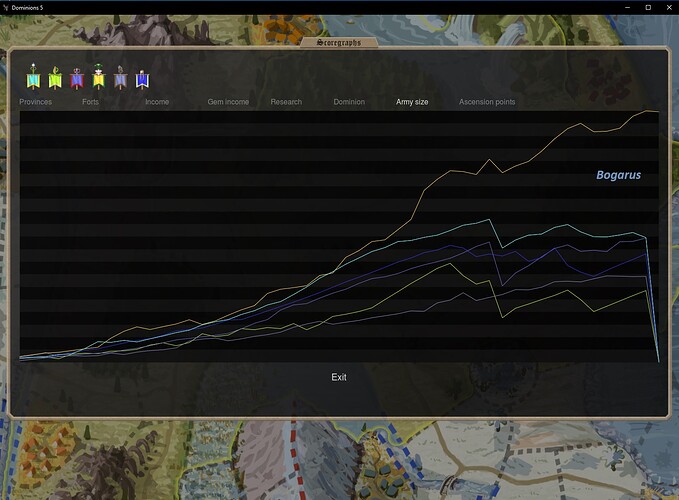 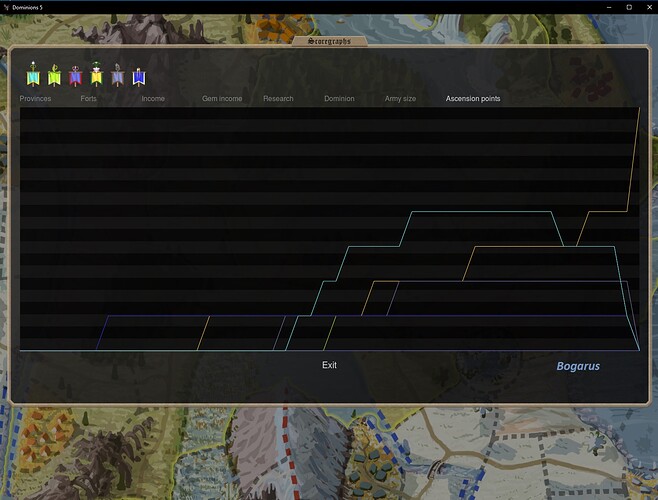 so can we play another one? though i’m not a fan of discipling. I’m crappy enough to play in a noob one, if there’s interest

Stealthy assassin mages, morale boosting snakes, poison slingers, units that permanently generate undead, decent magic diversity and the best death mages around. It sounds like a playground, but I just couldn’t seem to put it together. The undead summons are nice, but in order to get a mass together I poured so many resources into the summoners that other things suffered and when push came to shove, the stupid fire bless on my capitol only sacreds did a lot more for me than any of those summoned units. That was a fun battle.

I broke decently out of the gate, but ended up expanding into territory that I couldn’t hold. Not sure who started the alliance against me, but Mysterio and Lego shared no border so it was pretty natural for them to team up and since I sat between them taking me out served both their interests. I did see it coming, but wasn’t able to rally anybody to my aid immediately. When the 3V1 started there was no way I could compete with armies coming across all my borders at the same time. Steve went with them rather than me and that drew Kolbex’ attention. Fortunately after taking my southern provinces Lego realized further gains were going to be too costly and with that cease fire and Evil Steve fending off Atlantis I was able to hold on long enough to get burden of time up twice and be a thorn in everybody’s side, but I was through as a real power.
Of course gaining peace with me granted Lego a free hand against pyrhic and that was the game.

I went with scales although they were odd scales. Hot/luck/magic and a stealthy rainbow meant to flesh out some of the paths that were lacking. I figured the more gems I had the more death gems I could burn. That part worked, it’s just that what I burned them on wasn’t really useful on the battlefield.

I think I went the whole game without a formal NAP and that probably wasn’t the best choice. Everybody else was locked into peace and that just made me a juicer target.

My build was your basic Yogi. I went total greed with an Imprisoned Rainbow and decided to try something different.

Turmoil 3 and Fortune 3 to max out lucky events (some paid off) and Production 3, Heat 3, Growth 3 and Magic 3. Production 3 was probably odd, but honestly, Bandar troops cost so little recruitment points, that the biggest thing holding me back was resources. Plus the extra gold from Growth/Production and Luck events.

My paths were a bit all over the place. Since my pretender was imprisoned, I focused on cheap blesses and forging.

Astral 4 for Penetration, since it helped with the Naga’s Hypnosis. Death 3 was for Undead leader 20, plus +4 undying (you never know when the extra health will help you out). Nature 3 gave me +2 health and poison resistance. +2 health was key, because it gave the Yogis 11 hitpoints, so when my Guru Communion Masters cast Personal Regeneration, the Yogis would heal 2 hitpoints per turn instead of 1 (10% regeneration heals 1 + 1 per 10 points over 1, so 9 heals 1, 11 heals 2, 21 heals 3, 31 heals 4). Poison resistance is usually good, although my Nagas didn’t need it. They also didn’t need darkvision, so it was a toss-up. Blood 3 gave me Plus 2 strength, and of course, a chance to summon the blood summons… which I never got a chance to do. Finally, Air 4 was for shock resistance, but mostly for Air boosters. Since I knew I wanted to use my national Summons, Kinera, for putting down Fog Warrior and others, I figured an Air Helment would make it at least a little easier on my communion slaves.

Earth was because with Boots, I could build Bloodstones for my Nagarishi.

My strat for expansion wasn’t too hard. Naga Warriors had better armor in CBM, and so could expand with that blesss. I’m not sure what helped the most, but I believe the Penetration Bless helped hypnotic gaze work a lot more often. After that, Bandar for everything. I could build up my army quickly with my production scales, and focus on Nagaraja’s to lead my early armies.

The only road block to my expansion was running into Atlantis earlier than I thought.

I write more about my alliances and whatnot on a different day, but I’ll just say it was a bit of a dice roll on my part whether I would go after Vaetiheim or C’tis as my first war (or if Arco would come out early on). But early contact with @Evil_Steve made that decision for me since he had a plan.

I write more about my alliances and whatnot on a different day, but I’ll just say it was a bit of a dice roll on my part whether I would go after Vaetiheim or C’tis as my first war (or if Arco would come out early on). But early contact with @Evil_Steve made that decision for me since he had a plan.

@Evil_Steve and I were discussing going to war with @dfs when he mentioned he’d like at least a third before committing. I was hesitant, since I didn’t want our scheming to be used against us. But it turned out to be the right call.

Prior to working with V, I realized I was in a strategic pickle: my capital was on a narrow piece of land with the ocean (and Atlantis) to my north, a 3-province lake (and C’tis) to my south, and Arco and V to my far west and east, respectively. So Atlantis and C’tis were my two immediate concerns, given my cap’s location.

I quickly ceded the ocean to Atlantis (because, duh!) and forged an agreement with C’tis to leave the lake indy until the other provinces had been conquered. Everything was fine, until C’tis’ actions and demands rubbed me the wrong way. To make a long story short, I then contacted V and filled him in, and the rest is history.

As for my Pretender and blessing…yeah, I completely borked that. Air and Water for my pretender didn’t do much for me (especially water), so my blessings weren’t much of a boon to my Khlyst. I think blessings work differently in Dom 5 than they did in Dom 3, so I should have spent more time reading up on it and learning about Bogarus’ units before creating my pretender.

@pyrhic, thanks for capturing the graphs! My standings are about where I expected them to be, especially in Research.

Based on the spells I saw others casting in their battles, I knew I was lagging far behind everyone else. I waited way too long before focusing on research, even though I found a Citadels of the Lore Masters in Newland (114) in the somewhat early game. It was located on the Bogarus/Atlantis border, which was why I wasn’t willing to cede that province to Atlantis. So I started cranking out Sages instead of my Master of Names, since they’re more cost effective. But I should have been cranking out both to close the research gap.

I’d be willing to play in a newbies only game, but am also not a fan of discipling. I would prefer an EA game (don’t think I’ve ever played one in a Dominions game), since I prefer magic over might. :-)