Dominions 5 - There is no I in team, but there is in Disciple

The Team Mictlan bless was +4HP, minor poison resist, dark vision 50%, blood surge, flaming weapons. The pick of dark vision was Kelan’s idea who was most concerned about a Xibalba play of a world plunged into darkness. The other reason for dark vision was the series of caves that existed. Very sound reasoning and I’m glad for it. It also meant that TNN was able to have perfect nightvision when blessed, and the throne we had nearby also meant the rest of our sacreds would have perfect night vision. Mix in demonic spawns and it becomes clear that Theft of the Sun would have been a lesser boon for us in a fight against the other two teams.

I discarded the idea of having Hinnom, I didn’t believe the map would be appropriate to support giant units. And I’m curious to see how the Agarthan team felt about their Hinnom pick in the end.

I’m curious about this as well. I was really glad to see the main Hinnom force leave Plothai area before I clashed with them. This is my first significant battle with Hinnom: 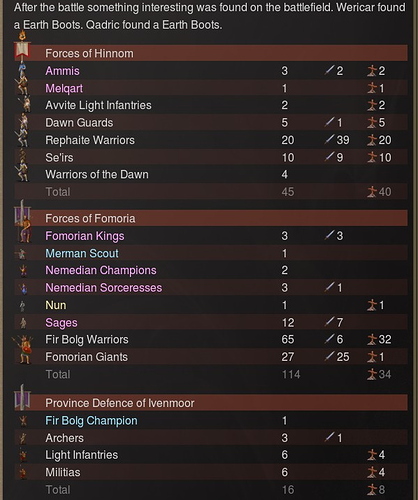 As a newbie, I had to learn game mechanics, so I was writing battle reports:

Well, Hinnom was selected because we wanted nations that benefited from High Order, High Heat, and we didn’t have Blood. Honestly, we wanted Formoria for Ur, to complete our Giants United Theme, but settled on Ur instead.

Other question: Who else was at construction 8? I thought Kailisa? I was able to get the Bell of Cleansing which made me happy.

Cash starved seemed to be the rule on this map.
I bid against you for the ship wreckers. Apparently you wanted them more. Drat.
Lost of folks being stingy on their borders about scouts.
I was at construction 8. We built the Bell on the same turn and you ended up with it.

One critical flaw with the game is those items that adjust scout reports of how many units are present. So a little bit before I attacked Ulm, I had a scout get caught wandering the border province, and where I was expecting heavy defense, I was surprised to see the numbers didn’t match up. A quick look through the commanders gave the story away, and I felt much more confident attacking both provinces in the same turn as the start of the war. If not for that scout, I would have adjusted my army differently.

Yeah. I was doing my best to keep folks off balance and never sure what was where. I think I only purchased 5-6 non stealth troops in the game.

I was short of commanders and the troop commander had that item on his person. It was not so much an oversight, but more a resource issue. As many scouts as I have I always need more.

I find it amusing and interesting that there was so much unwitting back and forth between the teams:

I dunno, i think it’s funny…

Gratz to team Xi/TC/Fomoria. They played it perfectly once the war was finally on. I would have attacked Ur too had I been in their shoes. This was quite the learning game for me and I can’t thank @legowarrior enough for the guidance and running the game.

So this is my Ur AAR as it were.

I am very new to the diplomacy side of this game (via the forum) and prefer a much more straightforward form of communication. Managed to step on myself a couple of times in this thread trying to not put a foot wrong and hurt either of my teammates. Mostly out of panic trying to salvage my start position given that I knew I was in a bad spot and not skilled enough to work my way out.

So from my seat, I was super bummed after we restarted the first game. I got a great start and had a mid game pretender build with heavy death and astral to complement the Ur nature focus. I normally play (in SP) an SC pretender as that is more forgiving so I was really pushing my comfort zone in this game (probably not the wisest choice ;) It was exciting to have it working well and having the Ur troops expanding so quickly despite Ur being fairly mediocre.

Then we restart and within 5 - 7 turns I realized my game was over. Early expansion had TC immediately at my cap. They picked the right direction and I had an impossible time trying to understand this map. I tried to quick and form a border with them hoping I could expand south and not get cut off. Sure enough, Formoria was there already. TC and Formoria knew of course. My last play was to try and head north through the valley which ran me right into Xi. At that point I had 8 provinces at like turn 15 and I knew it was going to be a long slog while I siphoned resources from my team to stay afloat. @belouski and @legowarrior were good sports to toss me some provinces to help.

Don’t take the above as me whining - I’ve played plenty of in person games where this stuff happens (Twilight Imperium comes to mind) and you gotta play through a losing hand. I just didn’t think through what that would mean when playing a game for 6 months where I knew was out of the running on turn 10.

Sorry for dumping to AI once TC took my cap, but at that point I had figured I’d done my best for the game and didn’t really have anything to manage.

The game certainly wasn’t all bad. I had fun trading blows with Xi and got some good hits in. It was fun trying to outfit bands of stealthy reavers and spectres and I learned quite a bit about proper Dom 5 army composition. Having a killer stack is useless if you are raided and can’t get to the places you need to be.

Got to roll with your strength. Also, I took an income penalty on most provinces, where as Hinnom and Ur to a lesser one.

But Heat 3 was worth it for my Magma Children.

A little echo of our game: https://youtu.be/LNACVnStMTQ?t=1317

So i was thinking of starting a game…so stick your hand up if you’re interested.

Rules (very nebulous, feel free to chime in about if you like/dont like/interested/not) and i’m happy to shift goalposts, particularly for better ideas:

Diplo: i’m thinking of trying a duo-system with diplo: in-game can be anything via the in-game messenger, but the only thing allowed out of game would be publicly visible forum posts.

My reasoning: as any who have played with/against/unbearably close to, me can attest, i don’t really like the “immediacy” of forum pms for messenging. However, that said, i really do enjoy forum banter. What i’m thinking with this is allowing for any kind of public forum banter/chatting etc, but also allowing for a more slow-roll kinda backchannel if you do favor privacy. I dunno, i think it’s interesting.

Um, this is starting to sound like wilde ryde…(shush you)

Mods: none, though i may be open to worthy heroes or maybe a pretender mod

So I have a laptop now, and it’s definitely capable of running Dominions. I’m also going back to study, but I reckon I can devote some time to getting turns in daily. Even better, no more night shifts as a convenient excuse for making stupid errors. Oh, I’ll still do the stupid errors of course.

Yep, if it’s EA and like Wyld Ryde, I’m in. One of my favourite game settings.

CBM, I don’t really care much for one way or another. I can definitely live without it because it means I don’t have to remember to load the mod in the inspector.

Nation selection looks good in theory, but not sure about individually ranking players. I do like limited pool to select from for each player. I wonder if it is easier to just have each player create a limited (distinct) pool to choose from, and have each player then be randomly allocated to a different pool? There’s 33 nations, so max of 11 players.

It’s your game, I’m just happy to put my hand up and say I’m in.

I am still out of pocket, but intrigued by @pyrhic choosing 3 factions to choose from. Lets see, EA Ryleh, that’s probably something I should look at now, given that’s probably the first pick on the list.

Awesome that @Strato is able to find time for this.
I haven’t really looked at anything Dom related in quite some time, so have no opinion on mods. And my poor brain cannot remember the Wylde Ryde settings. But forum propaganda -ahem, serious discourse, I can always come up with.

Wyld ride pushed the emphasis on gems and magic. You had little to no gold or resources (they were set to 50%) with the idea being that magic and mages were vital. It did mean early game was more difficult, a bad fight could set a player back, and choices had to be made between recruiting units or recruiting mages.

It was a game style more exciting in the early age with the potent mages available, but in late age, I think a number of reasons contributed to a weird cold war stalemate.

Also pyrhic, is it worth having cataclysm mode enabled?

I’m willing, although as potentially the least experienced I don’t know how good a first natiin pick will be for me, since I don’t have the experience to know what a good pick would be.

Born to be wild thread created

Also pyrhic, is it worth having cataclysm mode enabled?

After Balance I would strongly encourage anybody starting a game to go ahead and enable cataclysm mode. Yes, the whole idea is the game shouldn’t get to that point.