Dominions 5 - You are a God! You are master and ruler of a loyal nation. You have unimaginable powers at your disposal. You have claimed this world as yours. But there are others who stand in your way. You must defeat and destroy these pretenders....

This update adds new heroes for a number of nations and new summons for the Japanese inspired nations. Other notable improvements are unique vampire summons for Ulm, user interface improvements, additional details shown for many rituals. There is also the usual bug fixes, minor tweaks and improvements for modders. The manual has been updated as well.

@legowarrior. Think you have the wrong game or I’m really bad for not knowing any of this Dom quest thing

Look again! It’s all an illusion.

Although, maybe that isn’t the case. Maybe I truly copied the wrong game initially, but later corrected it.

Who knows the truth.

Inspector has been updated. Lots of new summons for Jomon and Shinuyama.

The sad thing is I’ve been playing Dominions for years and thought the original post was an actual change log for Dominions.

So, the new summons are really interesting. I am interested in trying them out some time.

So, I wanted to list a few links that people might feel are helpful that I’ve stumbled across, or been told about.

Inspector - shows all the units, spells, events, sites and items. All searchable. It’s probably the most important resource after the manual and the game itself. Not 100% perfect though.
https://larzm42.github.io/dom5inspector/

Pretender Calculator - when all you care about are the scales and the bless, look no further than the pretender calculator. Put in the things you want, and the pretend shows you how many points each chassis is left with.
http://pretenders5.testingmagic.ovh/

Dominions 4 calculator - Okay, this is out of date, but the communion one still works. Maybe it will be updated sometime.
https://winkit.se/dominions/calc.html#meleetohit

Llamaserver - One way to set up play by email games. It’s been down for a few days now.
http://www.llamaserver.net/index.cgi

Forum - It was once a great site. Sadly, now everyone just uses the discord, but still, you can find a lot of interesting information on it.
http://www.dominionsmods.com/

Anyway I hope that helps some of the newer players. Good luck with this massive game.

I recommend this youtuber, GeneralConfusion, he has made 43 videos, about different nation oveviews or general strategy videos.

Will 2019 be the year I finally tackle Dominions?

Printed manual arrived yesterday, so time to dive in. I’m surprised they print it with 8.5x11 pages, but I guess that will make it easier to read all the charts.

40% off during the sale. So, if you are in the fence, this a good shot at grabbing it.

For years I’ve been pondering buying Dominions but never have. Is it possible to play this co-op? (my SO and I enjoy playing turned based games together but we have very few choices these days.)

Yes, you can play disciple games, where the players are permanently allied. One person creates a pretender, with their domain abilities, while the other player(s) are disciples, who have characters and nations, but share the bless and Dominion with the pretender.

Now, the AIs abilities are limited. There are a lot of abilities and spells it just can’t use or use effective.

Good points! And you can definitely create some challenge for yourself with how you set the game up against the AI, at least until you learn the powerful strategies and implement them. It can be sort of like Master of Magic that way, I believe, as far as the strategic portion of the game against the AI. Once you learn how to take advantage of some synergy, you can start to overpower the AI, but the learning process can be glorious if you have patience. It also has further opportunities in various MP games in many communities, like this one, that keep it going if you want to test your mettle against human opponents.

EDIT: Had to try to fix that horrible run on sentence! this probably belongs in the drunk thread…

Thanks for the feedback, appreciated.

There is a big update coming up in a month or so. Expect it on the 27th I think.

Nice, I had the feeling the support for Dom5 in terms of content had fallen a bit in 2019 (with respect the support Dom4 had), so two new nations are very good news.

Here’s a link to the “Jubilee” update announcement, with blurbs about the new nations, Ind, the Magnificent Kingdom of Exalted Virtue and Na’Ba, Queens of the Desert. 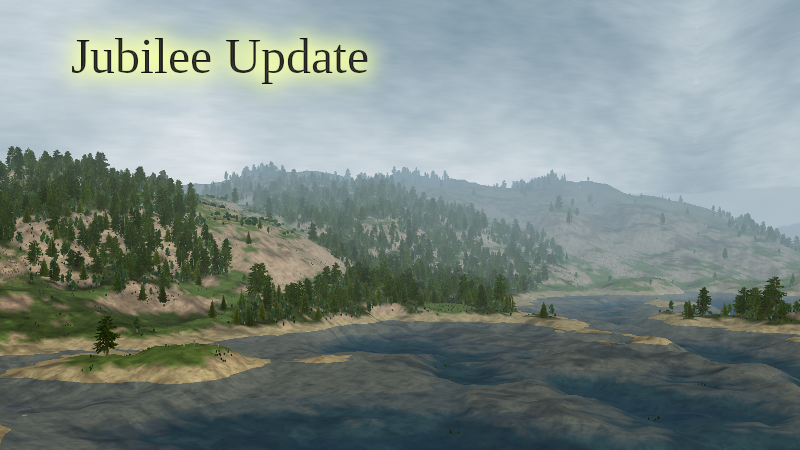 To celebrate the two year anniversary of Dominions 5 on November 27th, we will release an update with two brand new nations. Ind, the Magnificent Kingdom of Exalted Virtue and Na'Ba, Queens of the Desert. Ind is a fabled kingdom of marvelous riches...

The update is out and man, Illwinter makes more and more nations of wild designs. The times they just did a few normal units and commanders and that’s it passed long ago. 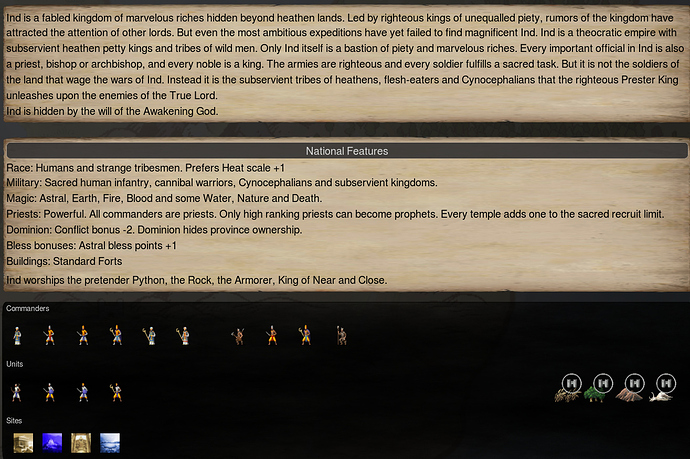 -Hidden dominion. Your dominion hides armies and province ownership from scouts (not from for provinces touching enemies provinces).
-Weak dominion. For dominion conflict, it’s like its score is 2 points lower.
-All national units are sacred. Oh yeah, all capital units are holy including archers, and all capital commanders are priests. Minimum level 2, in fact.
-Every temple adds 1 to max sacred units, instead every 4 or 5 temples like other nations.
-However they mostly fight by using foreign, heretical troops, that represent the weird myths people had in medieval times. Like cannibal tribes recruited in non-forted provinces. The cannibals create unrest, but they are ‘free’, recruited by special commanders on the field and said commanders can reduce unrest.
-They also have other types of troops to recruit building forts, depending the type of province, they have access to:
*Pyconie troops (hobbits!)
*the Lost Tribe (giants with dawn blades but homesickness)
*Lady Knights of Femeine (a small matriarchal kingdom full of orders of female knights)
*Cynocephalian troops (people with dog heads)
*troops from the kingdom of Orionde (human kingdom with satyr and centaur slaves, with colored lions)
So all together Ind have six distinct group of troops! Some uses slaves, others can summon animals, others are berserkers, and others have blood magic.
-All special capital buildings have a function. The Palace maximizes Order, independent of your dominion type, the Great Mirror allows scrying, the Onyx court allows commander training and Fountain of Youth decreases unrest and makes unit age slower.