Doom 2016 had a lot of skeptics when Bethesda offered the multiplayer as a beta - which played very different from the campaign - and then kept a tight embargo on reviews. The game ended up being excellent and set a high bar for this one. I hope they get it right.

Speaking of multiplayer, the new Battlemode pits two players as demons against one Doomguy. Async multiplayer is tough to get right - hello, Evolve - so cautiously optimistic here.

I loved everything they showed of this game. Doom 2016 showed that it’s in pretty capable hands.

Not sure what to think of their Orion thingie at the conference. Apparently there’s a beta, and anyone can try to play Doom 2016 on their phones? If they can get a twitch game like this to feel good over streaming, then I guess maybe the technology really will be amazing.

November is too long of a wait. Fucking hell.

I think that was the working title for this in preproduction.

Speaking of multiplayer, the new Battlemode pits two players as demons against one Doomguy. Async multiplayer is tough to get right - hello, Evolve - so cautiously optimistic here.

I’m not excited. The least good part of Doom 2016 was the multiplayer, which was unintentionally asynchronous. Once a team got a boss monster spawn, it was pretty much over for the other side. The rest of the MP was oddly bland and unexciting, which is a weird thing to happen in a game about chainsawing demons.

All I know is that if they plan on DLC, there better be some story stuff. They screwed up hard last time by making all DLC MP.

Also, please separate the SP and MP so I only have to download the side I care about. I hated wasting bandwidth and space on the garbage MP.

All I know is that if they plan on DLC, there better be some story stuff. They screwed up hard last time by making all DLC MP.

The deluxe edition comes with a year one pass, which mentioned that it includes Campaign DLCs 1 & 2.

The rest of the MP was oddly bland and unexciting

Indeed. It completely failed to take me away from my deep obsession with Titanfall around that time. Once I had the achievements, I was out.

But, that said, I hope there are some standard DM maps available for playing, too. You never know what might turn out to be fun.

From the E3 stuff it looks like you’ll be assaulting heaven too. I always thought vicious angels were cooler than demons anyway, like Christopher Walken in The Prophecy.

I love the idea of kicking ass in heaven, but I’m a little concerned about the tonal and thematic shift that heaven levels would entail. I mean, hell just looks so metal, and heaven is … you know, heaven.

The deluxe edition comes with a year one pass, which mentioned that it includes Campaign DLCs 1 & 2.

It is funny how they quietly dropped the whole Snapmap editing stuff. 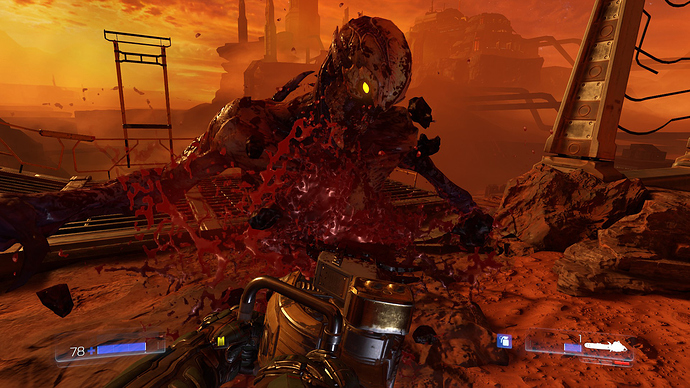 That’s what I get for not checking my facts!

That’s why you should always carry a chainsaw around, duh!

Oh, and as far as storming Heaven is concerned: the Darksiders games have shown you can have great fun cutting up angels as well as demons, so I’m not worried.

I only played the first Darksiders and as best I recall you did all your fighting in a cool post apocalyptic wasteland, so that was fun.

My main concern is bopping around a brightly lit heaven with fat baby angels and harps playing. Yes, I know, that’s not how id rolls. I’m just curious how they plan to make heaven badass.

The Simpsons arcade game is the only good fight through heaven I’ve ever played. I bet that’ll change, though. This new Doom looks awesome. The only downside is it’s going to push me to upgrade my PC this year instead of waiting out the current GPU market.

I wouldn’t be so sure about that, DOOM 2016 ran like a dream and there are additional optimizations in DOOM eternal. It’ll probably run a bit slower, but idtech scales really well.

My only concern with what I saw was it seems there will be reliance on the “arena” style levels (where you run around in circles until all the enemies are dead). I hope that’s not heavily prevalent because those were the lease interesting levels / segment to me.