I’d be happy with DLC that was just a series of Slayer Gate challenges.

That’s my feeling as well, though I’ve not dipped back in for Nightmare yet! 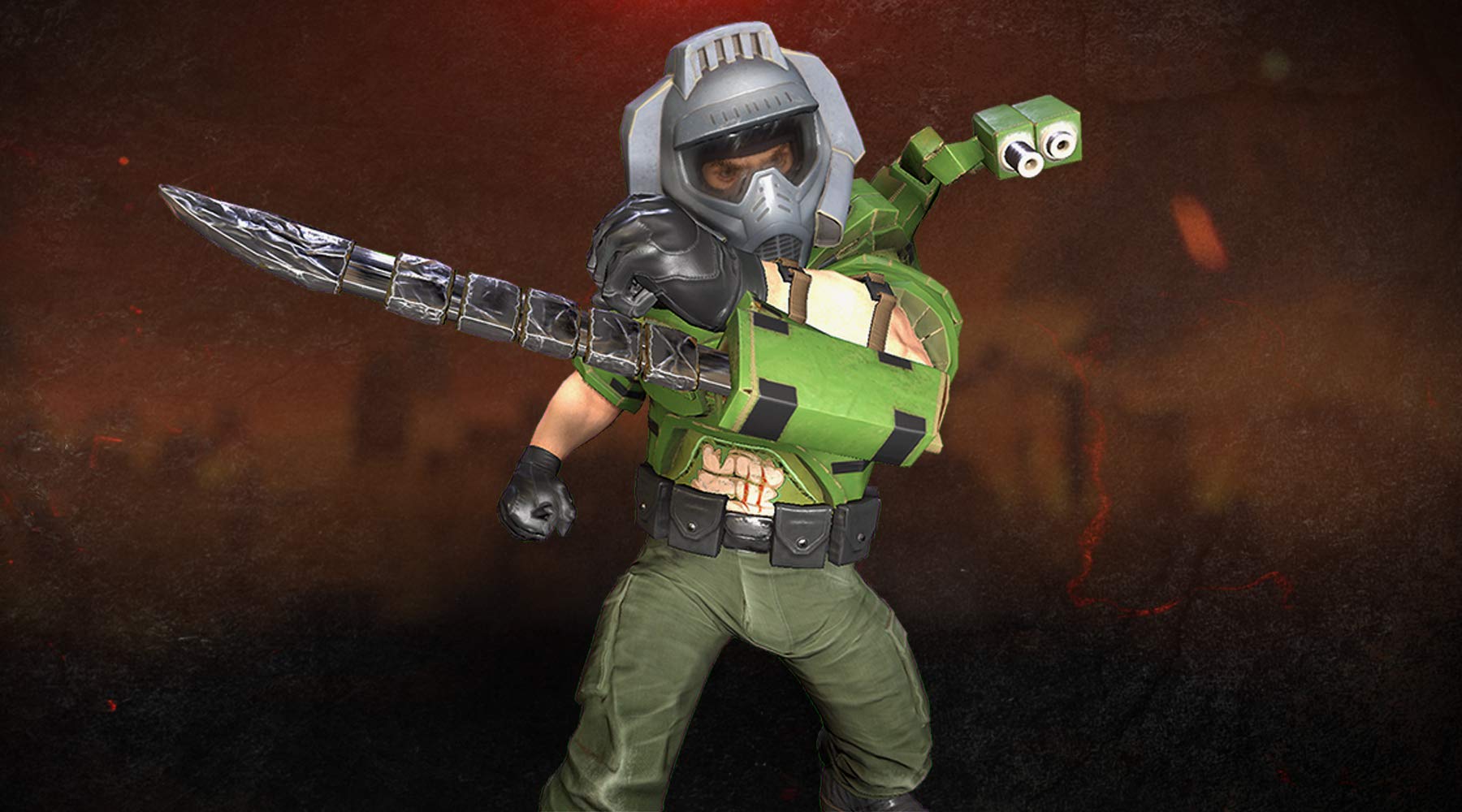 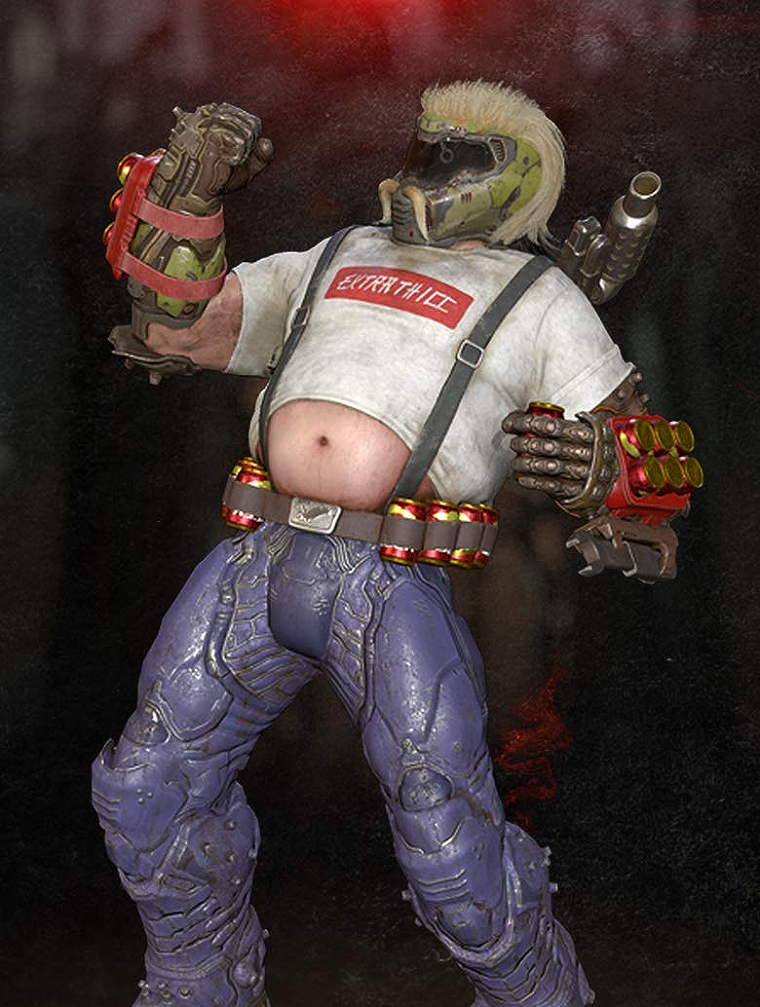 Is it based on the Tiger King?

The target market for this stuff and my personal taste are so far apart, they actually exist in separate dimensions.

Every time I loaded up the Bethesda launcher and saw the Doomicorn and hipster Archvile skins I winced. And I like the Battle Mode, even if my quick switching game is non-existent and I often get melted. Why all these skins have to be so butt ugly when the artists at id are clearly very talented I’ll never know. It’s probably for streamer lulz.

I think you can guarantee it.

Arc Complex is where the gloves come off in Nightmare. I’m getting through it, but you have to use every tool at your disposal - flame belch and freeze for maximum armor / health harvesting (and crowd control) as often as possible, for example. The feeling of victory is pretty damned awesome, but I feel like I’m one mistake from death at any point. I had to admit defeat on the Slayer Gate, just can’t quite beat it, but I upgraded my health by 25 points later in the level so hopefully that’ll be enough when I fast travel back there for another go. I remembered I had to leave the Cultist Base Slayer Gate as well, just didn’t feel sufficiently armed by that point, but I should be able to do it now.

Arc Complex is one of my favourite missions in the game though, so many really great arenas here particularly in the second half, although the early one between the office blocks with the purple gloop can fuck off!

I reached the Gladiator today (on Ultra-violence.) Phase 1 was easy but I tried Phase 2 about 15 times and couldn’t get him. But fear not, I’ll keep at it! FOR KRAYZKROOOOK!

You can do it! The bit where you have to dodge under or over that plasma rope he fires at you I found by far the hardest part. The rest I seem to remember involved some combination of lock-on rocket launcher, ballista, and chainsawing fodder while constantly side-dodging around the arena.

Rockets do seem to be pretty effective. I’ve been repeatedly mauled up close trying to time the super shotgun with his green eye flashes. His ball and chain just chews me to shreds. I’ll try keeping my distance with the rocket and ballista.

I think I started doing better with the plasma rope when I decided to limit my spastic reactions. So now I back up as far as I can while only moving to position myself underneath the high sections of rope without ever trying to jump the low ones. It was too much!

That’s what I did with the plasma rope, jumping it wasn’t easy to time. And yes, keep him at the opposite end of the arena in the second phase. There’s a point where he charges you where you can sometimes get a super shotgun blast to the face as he’s recovering, but I just kept back - easier to dodge his attacks. As with all things, concentrate on keeping yourself topped up with health and ammo, don’t take unnecessary risks.

I got him on my second try! Thanks for the good advice.

Just about to finish Arc Complex, heading back to do the Slayer Gate with 2 extra lives, full health and armor, and some extra upgrades. The Marauder miniboss went down easily enough, didn’t seem any harder than on Ultraviolence. What’s hard, however, is the first secret encounter halfway up a skyscraper which spawns a cacodemon, pain elemental and arachnotron, and a fairly strict time limit. I didn’t manage that one on UV, although I could have come back to it later in the game.

which spawns a cacodemon, pain elemental and arachnotron

Yes, I remember this one being tough on UV. I think I charged my ballista blade before activating the gore next to give myself a head start!

Well, I destroyed the Slayer Gate with the loss of only one life, and beat the secret encounter in seconds. Rocket lock-on killed all three, didn’t even take any damage. I guess the fear of it was worse than actually doing it.

Next up, Mars Core, I loved this mission last time around.

Mars Core was mostly great. Got the Slayer Gate after half a dozen attempts, the Marauder wasn’t the problem, the two Barons were. Also, I keep forgetting to use the BFG! I got another glitched encounter failing to register all the kills too. I guess I don’t need the extra weapon point but it’s annoying.

Gladiator Boss wasn’t really any harder than Ultraviolence. The plasma rope hits a lot harder, but you just have to not get hit by it! I used the slowdown rune which helps a bunch. Also, I discovered you can launch yourself out of it with the meathook! Handy. Still, the second stage took a few goes before I got it.

The first Archvile on Taras Nabad went down much more easily this time, are you ready for your close-up now Mr A. Vile? (ouch, that’s tortured) Now I’m trying to figure out how to get that sentinel battery which I missed last time.

I appreciate the challenge, the secrets are much easier to find in this game than Doom 2016. Maybe they didn’t want to break the combat flow too much but I like the diversion.

Also, my vote for most useless suit upgrade goes - by a mile - to the one which shows the automap devices on the map. There’s not a single one that isn’t in plain sight!

D’oh! Really? I think that might have been the first upgrade I got.