Steam forums wouldn’t let me post this, but I found a hilarious bug.

Swapping identical items (like power plants) would cause the core stat to improve each time you swapped it. I could do this infinitely.

Okay, with the faster movement, greater importance of avoiding attacks, and ramming, I find there’s way, way too many mines and other objects like that covering the play space. I’m playing a Drakk ship and relying on fighters and I swear all is re-summon them because there are just mines everywhere in most maps. Several of the mines will also float towards you and when a battle is getting hectic, it can be almost impossible to see. Especially when I’m trying to dodge projectiles and avoid ramming into other ships.

At the very least, give me a tool to clear them by shooting at them or something else.

EDIT: There are worse examples of this but this is pretty common for me. How am I supposed to maneuver/dodge/evade when everywhere I go looks like this? And the screen is filled with missles, lasers, explosions, and just a single mine will basically knock out all my fighters along with a chunk of my shields if I’m nearby.

Do you have a mine modifier on the system or sector? This doesn’t look like the normal rate of mines. Regardless, I agree.

I didn’t see a mine modifier, but maybe I didn’t look in the right place. I’d say about half my systems look like this and when combined with exploding anomalies it just makes it all a little unpleasant. It’s difficult and time consuming to move around and I’m perpetually resummoning fighters. One eveny ship blows up and half the screen blows up in a chain reaction, and if I try to move out of the way I run into the other mines.

More than once I’ve teleported into instant unavoidable death from mines.

Really? More than once? I’ve never ever had that happen.

BTW, what speed are you guys travelling at? I’m wondering because max speed was raised for Drox 2, and that may be a factor. I personally don’t like going above 200 – the game gets hard to control past that for me, and I’m not sure it should allow you to go that high all the time.

I’ve been blown up a couple times from wormholing into instant mine death. I think perhaps mines are just out of control on my PC for some reason. :) Could it be Minesweeper getting its revenge on me after all these years?

I’m still not terribly far in so maybe these things already exist, but I’d love to see more variety in the equipment which IMO is the heart of many ARPGs. For instance, there doesn’t seem to be much of any interaction with Fighters in the game? I can slot them as a weapon but that’s about it. I did see there was an item that would boost Beam weapon damage, I’m thinking stuff along those lines so that someone could create a Carrier style “class”.

That sort of thing. These modifiers could be tied to a specific type of equipment but also show up as random stats on other gear as well, similar to how you can find thrust or something on components other than engines/thrusters.

BTW, what speed are you guys travelling at?

Definitely was above 200, don’t remember the exact amount.

Any idea why the game is telling me the weapon on the right is an upgrade over the one on the left? 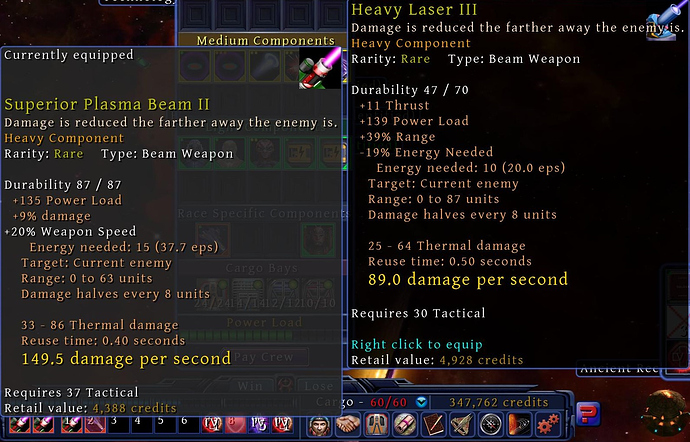 The heavy laser has substantially less damage and both are heavy components. Is it because the EPS is lower? It does have a range bonus but the damage on the Plasma Beam is significantly better.

Likely because it has more buffs.

Well the pain has gone away, so I’m feeling a lot better. :)

This is what I’m talking about with mines. I’d say 3/4 of all my maps are like this, and this is without a minefield modifier. Keep in mind in these screenshots several mines have already blown up.

This is where I’m checking for a mine modifier and I’m not seeing one (warrior, kinetic, and thermal are the mods in this screenshot):

I’ve pretty much given up on fighters because it’s just impossible to move without them always dying. As it is it’s almost impossible for me to move without blowing up the screen. These shots aren’t taking in notably bad areas, this is a good representation of what a lot of my systems look like and it is very much not fun to deal with.

Okay, so thoughts for @Steven_Peeler or whomever else might want to listen to my inane ramblings partly prompted by my post above and my 4th “go through wormhole and instantly explode” moment of the day.

What are the point of mines (not a rhetorical question)? They can be seen but not destroyed/interacted with directly like an antimatter cloud, so are they there to provide a sort of terrain? Personally, I would like to see mines reduced to one particular and not super common terrain type: a minefield. They shouldn’t be littered all over space, but rather in specific places where minefields have been laid. My reasons for this are that 1) I just find them annoying and not at all interesting and 2) they directly conflict with the new features added to Drox 2 such as the much faster movement and the ability to ram (and be rammed). Having a bunch of fast moving ramming NPCs while you are constantly surrounded by mines leaves you in a frequent helpless situation. Trying to dodge projectiles with the newer faster speed also conflicts with frequency of mines as you’re pretty much guaranteed to smash into them in the heat of battle.

If the intent is for them to be terrain of sorts, I’d like to see them replaced with other things because with the additions of Drox 2, I just don’t think they work. How about a nebula/cloud area that prevents shield regen inside, or halves energy regen. An area that reduces the range of laser weapons (i.e. increases the damage falloff) or acts similar as a gravity field, slowing projectiles noticeably (but not ships). A nebula that vision range is reduced so you don’t spot ships until they’re closer, somewhat similar to stealth.

I feel things like the above would provide terrain but it would be terrain that you could use or choose to avoid without the cost being exploding your ship or your entire fighter cover.

Speaking of Fighters, what is the intent of them? Are they supposed to provide small supplemental damage or are they intended to be a “first class citizen” among weapons and be on par with things like lasers, missiles, etc? Because if it’s the latter they really are not up to snuff in my experience, and a large part of that is due again to the mines. A NPC ship shows up, they don’t trigger mines themselves, so my fighters go to engage. When one explosion in the area happens, that mine blows up which means all my fighters are dead and possibly me if the chain reaction is large enough. Now my weapon system is basically disabled for the duration of the encounter. Given how many mines I run into on my maps, this is MOST of my encounters.

So my suggestions for fighters would be:

EDIT: Also, is there any way that a DPS indicator of some sort could be shown for Fighters? Aside from level I have no idea how they stack up. What is the DPS of a Bomber compared to 4 Raiders or 3 Interceptors? How do Interceptors compare to Fighters? I have no idea.

Here’s a screenshot of a good example. These are both Raider bays, same level. The one on the right the game is flagging an an upgrade. The “upgrade” is the same level, takes one more powergrid, and is lacking the +21% max damage and 16% component find that my currently equipped one has. Why the heck is it an upgrade? Is there a hidden base damage value that’s higher or something? As a player, I don’t have enough info to make decisions. 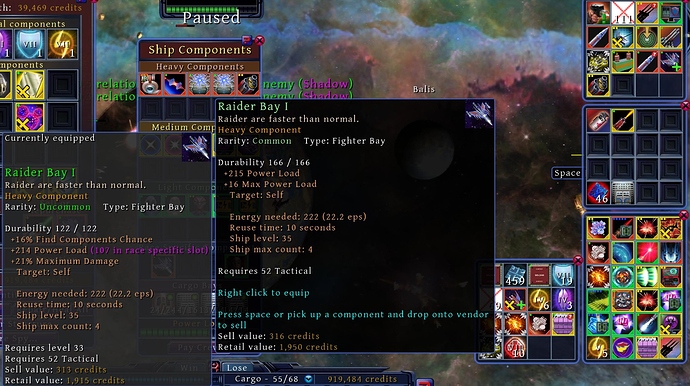 Another thing I was thinking about. With the command system you usually get a new slot for every new ship, going from Light, Medium, and then Heavy. The next ship upgrade doesn’t give you a slot. To make different racial ships more unique, what if these “gap” upgrades you got a new race-specific slot?

Obviously that has balance implications, but I was just thinking that at the start of the game, it felt pretty impactful as a Drakk ship to have an extra slot for Fighters. As the game has gone on, that difference doesn’t feel very distinct anymore. Adding more slots I think would help maintain the flavor for each ship.

I’ll be honest. I hate the mines. They’re the only thing about these games I legit can’t stand. LET ME SHOOT THEM DAMMIT.

Yeah this is where we want to go with the skill tree suggestion – basically reduce the max number of slots you can buy, and give interesting choices that diversify the starting races.

And I agree with you on the mines. For some reason, my early games didn’t have that problem, but now I’m starting to get a lot of them. At least if they triggered for the monsters as well I wouldn’t feel so bad.

Nice to see your ‘terrain’ suggestion of different nebulas having unique properties – that’s one I had in mind as well. Being able to sneak up to a planet following a ‘stealth’ nebula would be neat, as would an added travel speed nebula.

I should be clear that I’m loving the game, I had the day off work today and got sucked into a wormhole and suddenly it’s 5:00 in the afternoon. Would have been a total Quarter to Three moment had I started in the evening instead. :)

@Bluddy, that’s interesting you’re seeing the mine spam now too. It’s not every system but it sure is a lot of them and when it goes nuts with the mine generation it’s just really tedious to try to maneuver. I want to explore or fight or get to my quest objective, but I feel like I’m spending the majority of my time just trying to carefully move around mines. I wish AOE weapons like Bombs could blow them up at least, or give me a Minesweeper component to equip or something.

Also, is there any way to reliably get crew? I found quite a few crew early on as drops or level up rewards but I haven’t seen one in 30 levels (I’m L39 or so now).

Drakk planets can get you crew via a generated quest you pay for.

To me, best idea is to find crew with 2 stats, then keep them as they keep levelling up, unless you’re playing hardcore, in which case you don’t want crew.