Edwards comes flying out of the gate

Pushes all the liberal buttons; work, work, work vs. wealth.

This is not an accident. It is by design. Our Republican leaders value one thing: wealth. We see it in everything they do: Tax “reforms” that shift more of the burden onto the wages of working people. Health savings accounts that serve as tax shelters for millionaires. And now, Social Security—they want to borrow trillions of dollars, add even more to the deficit and cut benefits for millions of seniors.

And now they admit that private accounts will do nothing to solve the long-term problem. They want to stand with their friends on Wall Street. We want to stand with people who’ve worked hard all of their lives. And we believe that people should have the freedom to grow old with dignity without having to depend on their children. That’s what we believe in.

George Bush likes to talk about an “Ownership Society.” We already have one: CEOs with jets; power companies that get their way even if the health of children and pregnant women suffer. Oil companies who write our energy policy. George Bush’s so-called “Ownership Society” is a secret society that rewards the wealthiest and shuts out those who work hard every day.

What we know and understand in our soul is that hard work built America. Men and women who worked with their hands and their heads—who still do—and just want America to be the land of opportunity again. What we want is an Opportunity Society where everyone who works hard and does right has the chance to get ahead. And you create an Opportunity Society by honoring work.

We want work to pay. We want work to matter. We want a trade policy that gives our workers a fair chance—with environmental and labor standards. And no American company should ever be allowed to leave this country, go overseas and hire children to do their work. When people do right by America, America ought to do right by them.

Maybe Kerry did have him tone it down, I dunno.

You know, this president flies over America and goes to events and stands with his friends. Well, we ought to stand up for people nobody else will. Last week, I went to Little Washington, North Carolina and met privately with a group of men and women who were struggling. One woman had been living in a shelter. She told us how she wanted to work. If she walked into this room tonight, you wouldn’t think anything of it. But when she walked into the local Laundromat to get warm, she said she was told to: “Get out of here. Anybody living in the shelter’s got to be trash.” There but for the grace of God go I.

And then I met Loretta.

You know, I can still feel her hand shake—determined and strong like a truck driver. She spent 14 years working at a wash house—working for the minimum wage—earning a little more that $200 a week. She would always try to do better, but no one would give her a chance.

Well, she kept pushing and pushing. She got her GED and a loan. And now she owns her own pizza franchise. We asked her how many people worked there. She said that there are “eight of us.” Not seven people work for me. There were “eight of us.” She was asked about the cost of her employees and she said that it was an honor to be able to give them their paychecks. You could hear in her voice the respect she has for other people.

There was hope in that room. America was in that room. It was a million miles from that mill in Robbins, but sitting with Loretta and the others—it was a very familiar place. That natural respect for other people. That belief in effort. And that hope that if you just keep going, try some more, things will get better—isn’t this what America’s all about?

Go, 2008. Who knows, maybe we can put together an economic policy for the Democrats that doesn’t whore us to wall street.

So don’t tell me we Democrats don’t believe in anything and don’t know where to go. Because we do.

Great, Same old Democratic BS. “The Republicans are standing by the rich old bastards, but we stand by the poor working people.” Great, but WTF are you actually going to DO???

We’ve got a guy who is a janitor in our building. He’s about 60 years old, doesn’t make a lot of money. Life long Democrat. I was working late last week and bought him a cup of coffee and we sat and shot the sh%t about 8:00 one night. He said “You know, I’ll always vote Democrat, but the first time I ever got more money in my pocket was when Bush cut taxes - I didn’t get as much as you probably did, Jeff, but my paycheck never got bigger under Clinton.”

So great, Edwards, “Stand up” for the middle and lower class. And make great “there but for the grace of God go I” speeeches. Get off you f&*&ing ass and actually do something beyond make speeches. I was an active Democrat during the Carter years, but left and became an independant during the Reagan years (yeah, I was one of those “Reagan Democrats”, even after working for the Carter campaign) and have become totally disanamoured of the Democrats in the last few years because they are all posture, all talk about how evil the other guys are, but no action. Great speeches, no walk the talk.

LOL! ;) Hey dude, you know exactly what I’m saying. See my previous message - get your hiney out to E3 this year and let me buy you dinner so we can argue over a good bottle of wine (or Glenfiddich.)

That’s what it all boils down to, isn’t it? Who can line my wallet, right now, today, without care or consideration for where that money comes from and who ultimately ends up footing the bill. Instant gratification writ large.

Dunno, Doug didn’t sound very happy about it the last time he went. Come to Seattle, we can tour the anarchist shacks of Renton.

What the bloody hell??? A janitor received a tax cut under Bush?? I thought it was only a tax cut for the wealthy.

Hell, McCullough can’t even be bothered to do lunch in Redmond, and you want him to go to E3? I’m still not unconvinced that he’s some sort of sophisticated AI bot test being run by MS Research.

As for the janitor, I’d think at 60 he’d be worried about what kind of money he’s going to have in his pocket 15 years into his retirement, after Social Security “reform” and while we’re dealing the ramifications of the deficit and Crusades II.

That’s what it all boils down to, isn’t it? Who can line my wallet, right now, today, without care or consideration for where that money comes from and who ultimately ends up footing the bill. Instant gratification writ large.

2 chickens in every pot!

[quote=BrewersDroop]That’s what it all boils down to, isn’t it? Who can line my wallet, right now, today, without care or consideration for where that money comes from and who ultimately ends up footing the bill. Instant gratification writ large.

…and a cap in every ass.

Hell, McCullough can’t even be bothered to do lunch in Redmond, and you want him to go to E3? I’m still not unconvinced that he’s some sort of sophisticated AI bot test being run by MS Research.

As for the janitor, I’d think at 60 he’d be worried about what kind of money he’s going to have in his pocket 15 years into his retirement, after Social Security “reform” and while we’re dealing the ramifications of the deficit and Crusades II.

We talked about Social Security - he’s scared. He’s been scared for a while. I think he just has recently realized that SS isn’t enough to live on and never will be. He’s been hearing for a long time that SS is in trouble, was hoping that the new changes would help, now is hearing they may hurt more than they help, but doesn’t have any faith in an unchanged system. I didn’t know what the heck to tell him. I do know that I’ve been telling my new hires for years to max out their 401Ks from the very first years they start work. Wish I’d have done the same, I’d feel a lot better about my own impending “latter years.”

Ugh, poor guy. My only advice would be this book; you need surprisingly less income to retire on than what everyone else tells you: 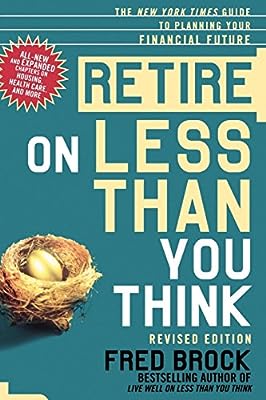 Retire on Less Than You Think: The New York Times Guide to Planning Your Financial Future

The bestselling, hands-on retirement guide from Fred Brock, thoroughly updated and expanded for in-depth advice on housing assets, health-care options, and more With Retire on Less Than You Think, Fre ...

Meanwhile Bush’s health insurance “reform” is going to cost 2X as much to “fix” as the amount that has supposedly thrown SS into a “crisis”.