Is magic still easy mode? I want to try that for my second run.

This is the first time I’ve gone heavily into magic in a souls game, and it’s certainly viable. I still use melee a ton though.

I found a lot of magic stuff, sorcery, faith etc. and get sad not being able to use it. I could try to pump my next levels into INT. I am level 35ish, it is getting more expensive. On the other hand, I have some sweet gear where I need the STR. I have not found much of DEX weapons, still using my starting Scimitars leveled up to +3

Btw. the Ashes Of War don’t do much in improving scaling so far. If I set it to quality or dex, I go from D to C but it only makes like 4-5 points difference… need I different Ashes or level my up my stats more to feel a difference?

Curious about the nightrider flail I upgraded it a bunch (stopped by a couple of mines first) and then respec’d my build to use it and have about a third more vig, then I went back and put down the big R in two tries (I guess I also had two more levels, but I don’t think that made a lot of difference, heh). Good weapon. Of course what came after in more or less the same place I am finding even more frustrating! I thought that guy was the epitome of “spammy bullshit,” but I apparently haven’t seen anything yet. I kind of hate the “you thought one boss was cool, well how about two” style of fight, though.

There is a minig cave near Calied (?) where you have to fight 2 dudes and then jump down a tunnel (no going back) and find a lost grace. Since the 2 dudes where hard enough, I did not touch that lost grace, because I don’t want to get stuck under-leveled in an area that is too tough and where I might have trouble with the boss. No warping back of course.

I wonder if you can brick your game and get stuck in an area like this where you can’t come back because you are under-leveled. Git gud, I guess…

The Godrick-fight is so exhausting because all I have is a 3+ Uchi-Katana (or whatever it is called). With so little damage that fight is so long. I can’t seem to find a phase where I can weaken his stance and get him to break for a moment. It just takes too long. But I want to beat him solo, melee,… damn! Any tips? Maybe it’s time to admit that I am too slow, too confused, too hectic, too… not cool!

Doesn’t matter, I can go back to an area I discovered where I can kill (very quickly) 10-12 enemies worth 2.5K each as many times as I care to.

The best I’ve done so far, only level 17, is the giants pulling the carriage, or that Beastmanin the caves, who’s worth 1000 runes and fairly easy to beat.

If you can beat those trolls (I also keep calling them giants, but I guess in game they are called “Trolls”) fairly easily and reliably, that’s how I did it around then as well. There is a plateu to the West of the Gatehouse grace site (I think, don’t hold me to that) where a wind current can take you up to a huge area with about 5 of these guys - so 5k souls total if you can take them all without needing a flask refill. And it’s a lot of open space so fighting them on Torrent is a breeze. I think that was my (personal) first rune farming location.

Curious about the nightrider flail I upgraded it a bunch (stopped by a couple of mines first) and then respec’d my build to use it and have about a third more vig, then I went back and put down the big R in two tries (I guess I also had two more levels, but I don’t think that made a lot of difference, heh). Good weapon.

If you want even more oomph you can put a cold enchant on it (it requires one of the special whetstone, but I’m not sure which). Scaling will be a little compromised but overall dmg should go up, even with no extra investment in intelligence. You will lose the ability to buff the weapon with spells though. Anyway, both bleed and frostbite get applied relatively fast and it’s VERY common to get procs on them back to back, it’s quite fun to see a boss suddenly lose several thousands points of health simply because you were relentless in applying blunt object to the enemy’s face.

I’m at level 72, and have finished the big bosses at Stormveil and the Academy–is there a consensus on who to go after next? I’ve found minibosses here and there, but haven’t encountered anything that stands out as a dungeon like those two.

I have never given a solitary care about one line of lore in any From game before, but I’m really thinking a lot about the lore in Elden Ring for whatever reason.

I’m at level 72, and have finished the big bosses at Stormveil and the Academy–is there a consensus on who to go after next? I’ve found minibosses here and there, but haven’t encountered anything that stands out as a dungeon like those two.

I think the leader of Roundtable Hold gives you a list of the people you need to kill and some general guidance on where they are. But there’s some other guidance you can get if you find and fully explore Caria Manor and go all the way through the back of it.

I just got to that area last night, took out some ghost knight, and was given some vague directions by an NPC.

I know the general area where at least two big bosses are (Caelid and Mt Gelmir(), but wasn’t sure where they actually are within those zones. Or if there was an opinion on which to go after first, which is of more interest to me.

Only to say it: I consider Dark Souls 1’s story as one of the best (told) in gaming (that I know of). It really was worth understanding. Elden Ring on the other hand is much more obscure to me for now.

I consider story/lore in From games to be like a jigsaw puzzle, where I enjoy rummaging through the box examining individual pieces and wondering how they might fit into a large whole, and leaving the work of actually assembling it to someone else. I’ll check back in once they’re done and see what it actually looks like.

There’s about a continents worth of technically optional content locked behind the boss in Caelid. Following the road in Caelid around the swamp will lead you to two places, one of them being the boss, however, there’s quest stuff you have to do regarding those NPCs in Caria before the Caelid boss becomes available. While everyone will find something worthwhile behind that boss, Int characters seem to benefit most. He is the biggest spectacle fight of the game so far, and the best I think FROM has ever done, so if that’s your thing, it also might be worth doing that next. His Great Rune increases stamina and HP.

Mt. Gelmir, like everywhere, will have something for all builds, but seems to have a lot of faith goodies. Other people are saying the boss there’s the most fun gimmick boss yet, so there’s that. Also, if you’re still in Liurnia, Mt. Gelmir is close by the crow’s flight, but quite far actually getting there since it’s connected to the Altus Plateau, a place you might not have been to yet. Because getting to Altus Plateau is necessary for progression, and you don’t have to do a bunch of quest stuff to go forward, Mt. Gelmir would be the more straightforward pick for the next spot to go, probably.

I think they’ve done a better job with the characters overall in this game, though that might just be because there’s more of them. Other than that, I’ve never been less interested in a FROM story, not because it’s worse than the others, per se, but more because, with how much stuff I’m drowning in in this game, story is even less on my mind than usual.

I actually did this already. Your posts about it were a big inspiration. The hoarfrost stomp is pretty powerful.

I have never given a solitary care about one line of lore in any From game before, but I’m really thinking a lot about the lore in Elden Ring for whatever reason.

I care a lot about From’s stories because it’s clear they do, too. I don’t like watching videos (although I know a lot of people swear by this guy…I wish he’d release his scripts because really most of the time the visuals are just unnecessary), but this game is more obtuse than most of them, so I’ll make an exception for this, I think. I have only watched a little but already learned a couple of interesting things. It predates the game so I don’t think there will be any major spoilers: 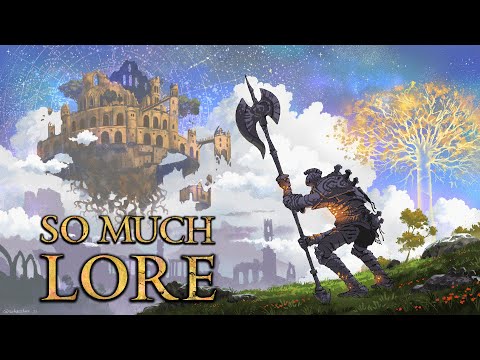 The boss reusing is getting… shameful.

“It’s the same boss you’ve fought 6 times, but this one hits for 1k!”
“That’s not more fun, it’s just annoying and tedious.”
“Also no summons and it inflicts Scarlet Rot constantly!”
“Just kill me.”
“Running back takes 4 minutes because stakes are random!”
“I’m gonna go explore literally anywhere else for a while.”

Yeah, @TimJames has been beating the “enemy reuse” drum almost from the beginning. They really are recycling bosses crazily. Maybe the world is just too big for them.

“Do you love Crucible Knights?”

“Did he say he wants to run through two dozen gargoyles and ride Willy Wonka’s five minute elevator everytime he wants to fight them?”