My best spirit right now is probably the Headless, my Moonveil is only at +5 or +6

Headless, for me, is one of the best, period. My first playthrough, and after I could afford the FP, I used her probably 90% of the time.

Moonveil and Somber Stones; what is your character level? What are the areas that you’ve been to? If you’re trying not to spoil yourself I’ll keep my mouth shut except to say that the Fextralife wiki will tell you some locations for Smithing Stones and Glovewort and it may lead you to areas you haven’t been to yet. You can stop there (knowing the general area) or you can have it map exactly where they can be found. But again, depending on your level and what areas you’re currently working, +5 or +6 may be just fine and the higher ones will come when you get to those areas more naturally.

I remember somber smithing stone 7, in particular, being kinda hard to get, as my Moonveil and Carian Regal Scepter were stuck at +6 for a while and by the time I found some 7s, I already had a handful of 8s and even 9s.

That Is kinda what I remember as well. You can find 5 and 6 stones in Leyndell once you get there. Volcano Manor as well.

Glovewort is found in catecombs and mines.

Yeah the level 7 stones are particularly scarce for some reason. I had to get the bell bearings to buy them from the vendor. By then I’d almost beaten the game.

So apparently I did the ONE hard to do thing that you are not supposed to do to get locked into a bad ending. Now apparently I have to complete the impossible to reverse it.

It is not that impossible it just means you now get to meet a few fun bosses. In fact the dragonlord may not need to be fought, you just need to get to the boss arena. As for Malenia, summon and hope you get someone good.

I’ve never played a Souls game before, but the chatter around Elden Ring was so good, that when my nephew had a birthday and asked me to join him in game, I couldn’t say no. That was a couple of weeks ago now, and my Confessor (modelled after Warrior Nun) is level 58. What a game! I’m totally enraptured. Maybe it’s a question of right game at the right time, but I’ve previously bounced off open world attempts, including: Breath of the Wild, Witcher 3, and RDR2. Why did Elden Ring hook me? I honestly don’t know. It’s not the story, that’s for sure. I find it near incomprehensible. But now that I know what I’m doing (e.g., don’t fat roll, and roll constantly), I’m feeling a real sense of weight and mastery when I actually win a tough fight.

I just got around to beating Rennala, with relative ease as I’m over leveled, and moving onto Altus and Caelid in search of a somber smithing stone 5. My build is something I just came up with because it’s cool: Faith based dual scythe wielding. I have barely any FP (88) so I’m still using the skelly and wolf summons (albeit slightly upgraded). I have Oleg and Lhutel, but I’d rather prioritize getting my Vigor up to 40 before plunking any points into Mind. Plus there’s always Endurance that needs more points. Roll roll roll! Which reminds me, I have to manually equip and unequip my crossbow because otherwise I’m heavy. And yes, I’m using the Talisman that helps with weight. I’m just deeply appreciating my heavy, heavy Grave Scythe (with Faith damage scaling ashes of war) and Winged Scythe combo. A jumping attack while dual wielding gives such a satisfying snicker-snack death to most non-boss mobs. And the bleed works well on bosses!

So, that’s me. Anyone from Qt3 besides Jeff still actively playing on PlayStation? And close enough to level 58 for me to summon for help on occasion? Do we have a group password?
Finally, @jpinard, do you think you’d be within summon range of me? I play on PS5, and you’re one of the only Qt3ers I’ve got friended and visibly still playing. I’ve been tempted to ask you for help a couple of times, but I’ve been a bit too shy to reach out.

I’d be happy to help! My two characters are a bit over level 150, but I think if you do a password link (at the top of the mp stack) you can over-ride the level limit. Ironically there’s still no confirmation on how level limiting truly works in this game as weapon level may factor into as well.

I love these invasion vids where they act stuff out: 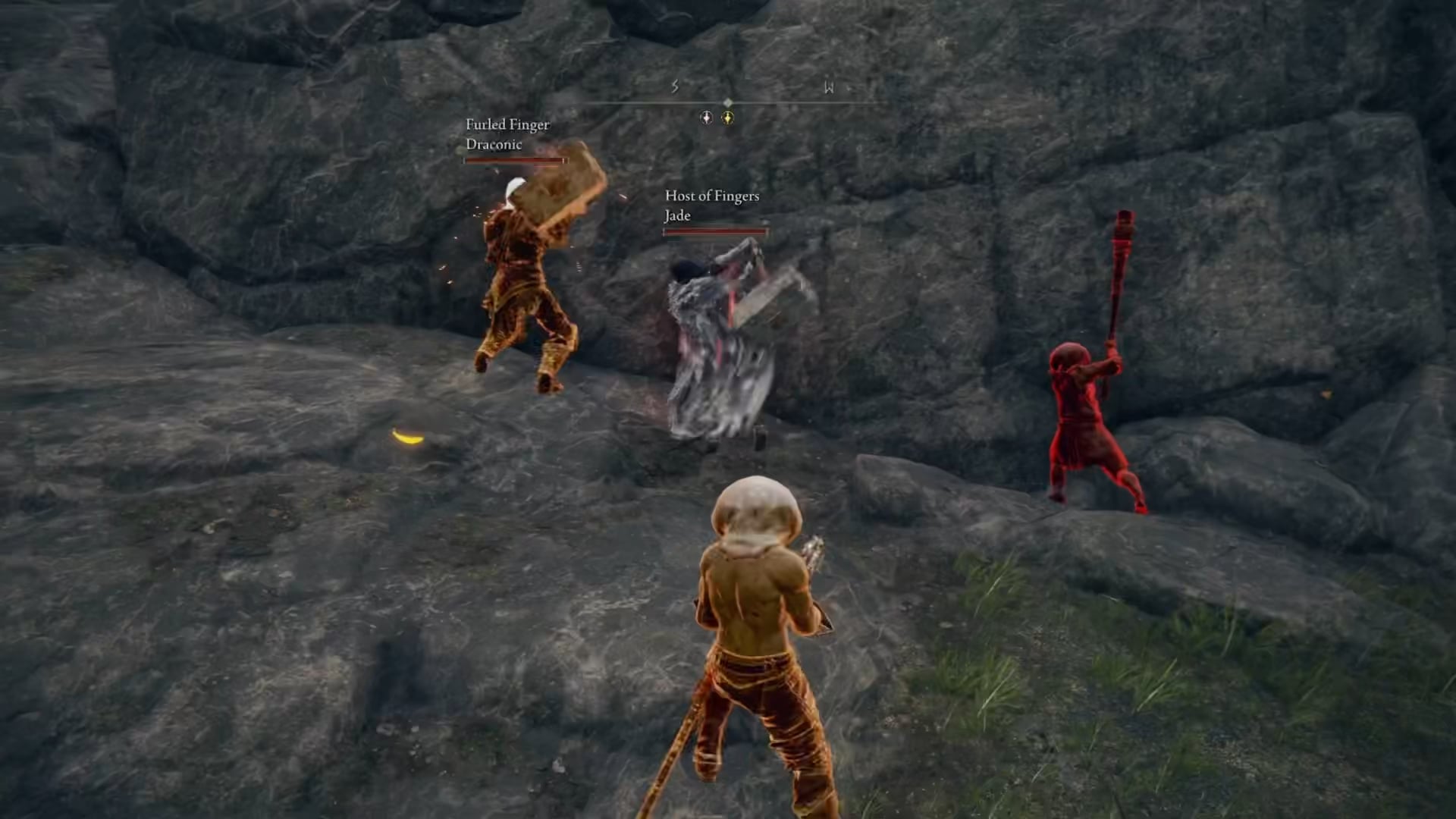 There was another one with a guy called The Vigor Check who would point you toward a specific spot and then see if you could survive one jump attack from his two colossal swords. 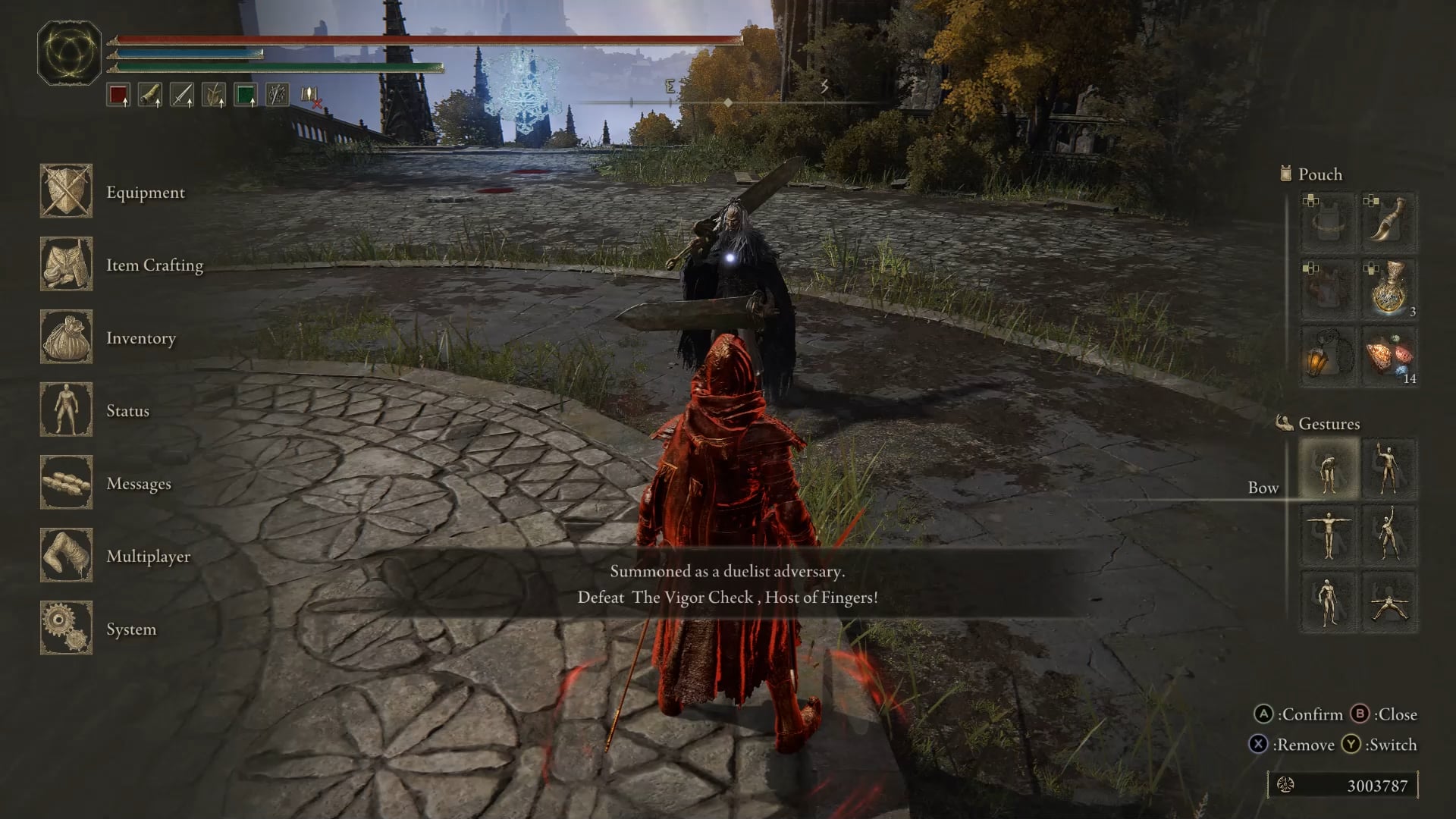 And I’m done! 160 hours with a level 170 INT/DEX Samurai using max level Wing of Astel, Moonveil, Carian Regal Scepter and Cold Uchigatana. Got all Achievements and Endings (had to be creative with going offline and cloud saves). Stats and stuff below (disregard my memorized spells; I was messing around with the Legendary Spells and Incantations Achievement). 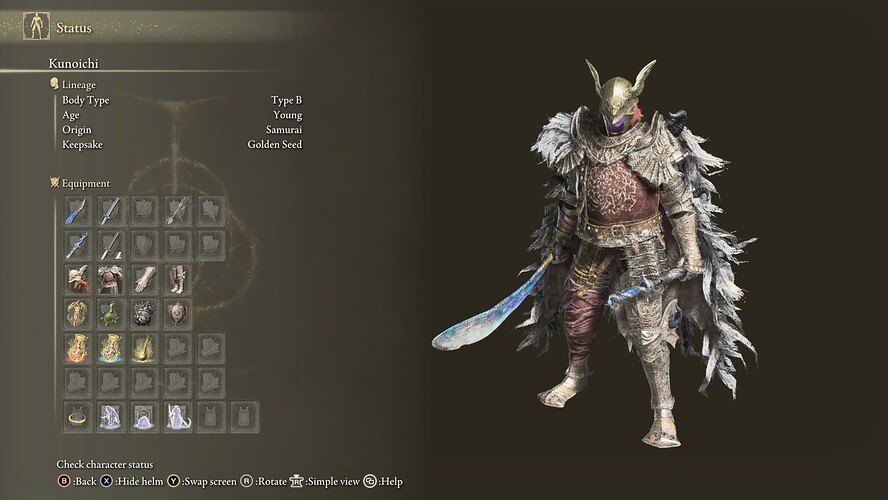 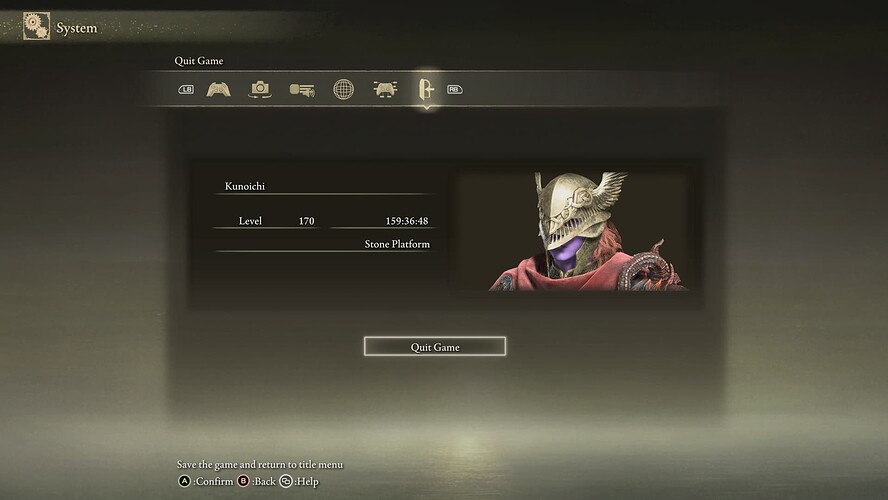 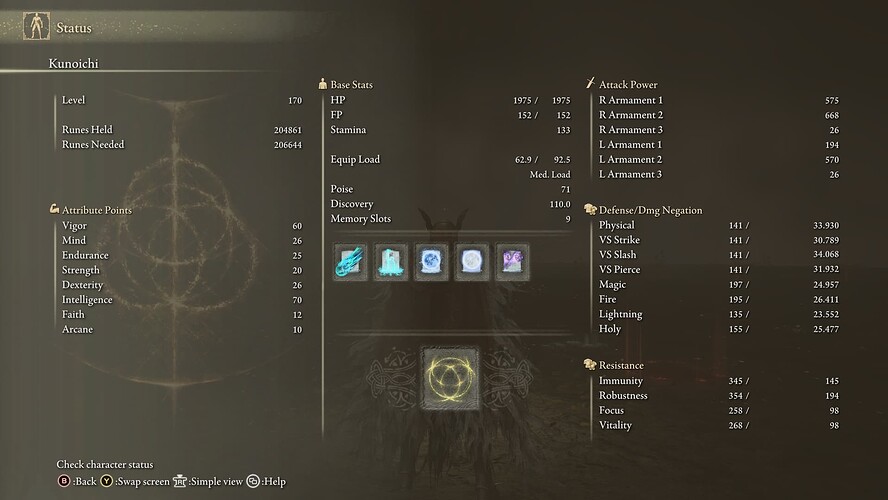 I love that this thread is still so active.

I’ve only joined someone else’s game twice (Red Wolf of Radagon and Beast Clergyman/Maliketh), so I’m still a bit unclear on summoning/matchmaking stuff. If I’m level 170 in the postgame, should I only try to put my “you can summon me” sign near endgame bosses/dungeons? Can I help n00bs with Margit or will it not let me join because I’m way OP? Or should I go into NG+1 and then join other people’s sessions against early bosses?

The matchmaking is based on level but you can be summoned across NG+ levels. Someone looking for jolly cooperation might summon you for early game bosses. You’ll probably steamroll them anyway.

Gotcha, I’ll just teleport around and lay my “yo I’m around” summon signal and see what happens.

I felt bad that the second summon I jumped into, my host immediately got taken out during the second phase of that boss. ¯_(ツ)_/¯

I finished around 174 I think and I found getting summoned anywhere early to be almost impossible. I don’t know if ER has weapon leveling included in their summoning but I believe the DS games did. For much of the game I helped people with Radagon, maybe 30 times? But I get no action there now.

I got summoned into Radagon once only to see the host already dying by the fog door.

But time of day matters as well.

Ah well, if it’s hard to join others, then maybe that will help wean me off of Elden Ring and try other games (I managed to get all Achievements and most of the good gear during my playthrough).

You can try invading? Liurnia is a good place for that, And activate the Blue ring and get called in as a Hunter.

Sadly neither of those options in ER is as fun as it was in DS3.

Sadly neither of those options in ER is as fun as it was in DS3.