I heard a new description of Soulsborne boss combat on the most recent DLC podcast that really resonated with me as I feel like I’m nearing the plateau of Elden Ring’s mid-game learning curve. The podcast guest described Souls combat as having more in common with turn-based RPG combat than reflex-based brawlers.

When I approach a tough boss fight for the final time in this game, I’m very rarely worried about fine-grained dodge timing or positioning or damage anymore. Instead I’m prepared with a chunky set of decisions that are individually fairly easy to execute. See fire, sprint to rear of arena. Boss hunches over, have time for two heavy strikes or one heal.

Just a reminder that the Elden Ring discussion is split between two threads: this non-spoiler thread and a thread for spoilers. And keep in mind that folks who play these games might have a higher than normal threshold for what constitutes a spoiler.

That was truer in the old days. Now with a non-trivial number of them having quick windup 5-7 hit combos it’s a lot more reflex based, I think. The bosses in this game are a lot, and some of them a LOT, more aggressive than even DS3 with some giving you no or next to no good drinking windows.

That’s a shame - it sucks when our physical limitations ruin any experience. I’m sorry to hear it.

My astrologer is 40th and my pally is 38th, so I did try. Plus a few other toons in their teens.

One thing I keep thinking about as I wander into a new and amazing area - I do wish there was some sort of “walking simulator” mode where the enemies just watch you walk around and never move towards you, and no doors or bosses gate progress, you can just walk around and really explore the amazing world they have crafted here. And I think that because of my own fears I’ll never see all of it - because it’s going well so far but you just never know. And also because it sucks to read about someone else having to hang the game up because they are just finding it too challenging.

Anyway (and unrelated I just don’t want to start a new post) I have been following my cousin’s progress, he and I write most days back and forth and the last few weeks we’ve been talking about ER and our progress. He isn’t good at gaming - I mean, he tries but he has the strangest hang ups. He didn’t even try to use the horse for about 20 hours of the game until he was kind of forced to (and also I yelled at him two emails in a row to stop making the game harder than it needed to be).

This is what I read in his email just moments ago.

The more you talk about magic in the game, the less I understand it. It sounds like using it well means fitting together a lot of different pieces that are lost on me. I know the game has different kinds of magic and it sounds like certain equipment increases the potential of it and other items are required to unlock certain spells. Or you equip spells? I really have no idea how it works.

When I tell you that I play the game by rolling around and swinging a sword, that is literally all that I do in combat (besides drinking healing potions, of course). I don’t know how to parry and I have no intention of learning as I have never been able to do this successfully in any Souls-like game. I don’t have the reflexes and I get frazzled very quickly during boss fights and can’t pull off the perfect timing required. Hell, I don’t even use a shield as I can barely coordinate something different in each hand so I just opt for the extra damage of two-handing whatever weapon I’m using. Other than that, there are many mechanics in the game that I don’t understand so I’m sure that I’m severely handicapping myself. You often talk about the amazing things you find but I feel like I’ve got boatloads of mediocre equipment and the vast majority the stuff that mini-bosses drop seems useless to me. Everything I find seems to be intended for use by someone else. It’s like all of the items and equipment only work well in certain combinations and with certain stats, and I don’t know what they are.

So as you can see, he really dislikes layering complexity into what he’s become comfortable with - sword and swing it? Sure, no problem. Add Magic? Oh hold on now buster, that’s beyond human comprehension. A shield!? No thanks, I’ll just use my face. I’m going to have a lot to say to him as my previous emails were filled with links to videos detailing how to do things that I knew for a fact would help him. Like Guard Counters, how Ashes of War worked, how Magic works and how he could put a few points in Faith and learn at least a basic healing spell, all that stuff.

So am i correct in saying that only your equipped items count towards your encumbrance? If so, it’s probably a good strategy to carry a few spare things on you to swap out for different encounters (ie, a faster weapon, more tanky armor?)

On the plus side, on my fifth start I think i’ve found a class i really like. Best(1) to worst(5) for me so far: Astrologer (1): magic and quick, i like it! Prisoner(2): really liked the extended reach of the weapon, Warrior(3): double scimitars was really fun, so much that i felt the flail was a little bit of a downgrade(and that was the sole reason i tried this). I’m not sure this has the damage mitigation i need though. Confessor(4): shield’s really nice, and more heals is good, but plays very conservatively. Hero(5): This should be awesome for me, but i just have such a hard time with the axes - i always seem to fall too short and then die. Also, limited mitigation. Also, having done this 5 times now, i’m getting really good at the tutorial and starting game :P

Fixing the tearing issue was huge for me - game now upgraded to fun!

Maybe give greatshields a try? I haven’t been able to equip one yet, but I use a medium shield with the Barricade ash of war and it makes you great at taking hits. I have stayed completely away from magic, the only buttons I really use are LT (to trigger Barricade), LB to block and RB/RT for attacking with my main hand weapon. Stat points mostly go into vigor, some in mind (20) for being able to cast barricade more than a few times before I need to use a flask, endurance (about 2/3 of vigor’s values) and the stat that my weapon scales with. For this purpose a strength weapon would be ideal because you need high strength for greatshields anyway. I’m about to enter the final stages of the game and I continue to laugh in the face of everything the game throws at me. Hard to beat the classics, I guess, and sword and board has always worked well in Souls series. There are also some thrusting weapons (rapiers, spears) available that allow you to poke enemies while having the shield up.

Funny timing with that advice considering I just watched this video: 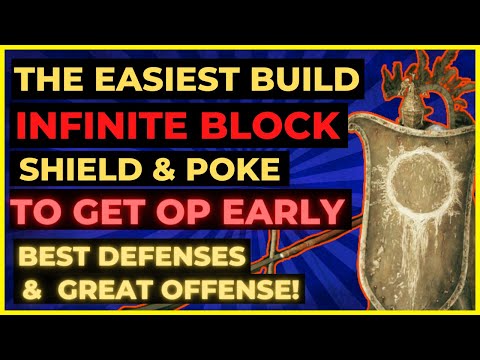 Glad I didn’t see this video before switching to a katana build. Would have been sorely tempting.

Are you using the ash summons?

For my build, it hinges a lot of my summons tanking for me while I throw in big rocks and crap into the boss’ face, and then run around while my summon can re-gain agro.

A friendly NPC became aggressive after I was summoned to co-op by having the Blue Cipher Ring enabled.

What happened was not a bug, it just got triggered by the co-op session re-loading the area. My mistake. Details on the hostility here: https://eldenring.wiki.fextralife.com/Gurranq+Beast+Clergyman

There’s a certain dragon that disappears halfway through the fight, also not a bug.

i just did the math and for the equipment I want to run I need 50 stam to still be able to roll normally.

Learn to love the Fat Roll. I certainly did in Dark Souls with the Havel set. A tank fatrolls.

Is that with or without equipment load talismans?

Without. I’ve got one of those but it doesn’t do a whole lot.

Follow up review from my 10 year old son, today after school as he boots up Elden Ring,

“This game is like a drug. Do you agree, dada?”

So am i correct in saying that only your equipped items count towards your encumbrance?

Yep, though it includes your alternate left/right hand items.

And hey, I just found a No Skill skill that switches your skill to your right hand. Oh man, they do love we sword-and-boarders.

I’m looking at two in my inventory right now that raise my current weight limit from 88.3 to 101.6 (regular) and another one that raises it to 105.1. I’m too lazy to do the math but knock yourself out if you want. They do not stack however.