I’ve used a map to look for the items to upgrade my Moonveil (somber stones.) It’s now +8 and I have a +9 stone in my radar screen (haven’t found the +10 stones yet.)

Quoting myself from the spoiler thread, just to set your expectations on when you can expect to do the final upgrade for Moonveil or WOA:

Thanks @Thierry_Nguyen - saved me from some futile searches. 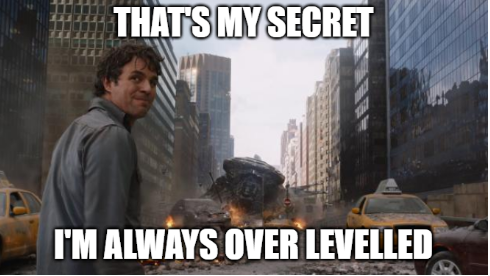 That part is the game’s tutorial that teaches you it is OK to just run past stuff you can’t fight yet.

It took me so long to learn this lesson - I was really frustrated until I realized exactly this!

Back into ER, I’m up to about lvl 120. Heavy in Int, Mind, Vigor. I’ve got my Moonveil up to +10 my Wing of Astel up to +8 ,need to find a Somber Stone 9 and 10. I have a “Cold” Uchigatana to dual wield and Power swing whatever that’s called with my Moonveil for up close fights, but I’m still using my Meteorite staff and slinging Rock Sling and tossing in some Star Shower - I’ve got Carian Phalanx and Loretta’s Greatbow and just added Renalla’s Full Moon but I haven’t been impressed so much with that so far. Got my Mimic up to +10.

Two observations: One, it’s hard to level up at this level. I really want to use my dragon Rot Breath but my faith is 10 and I need 15. If I use the talisman to get my faith up, replacing my talisman for Int boost, my Int drops below what I need for Full Moon. I also need to get my arcane up some to use the Rot Breath. I’m already using the Radogon’s Soreseal. That leads me to my next observation.

I realize the reason I don’t get the joy of free exploration in ER that I got out of Skyrim because I really wasn’t very goal oriented in Skyrim. I played one character for hundreds of hours, and I was still finding interesting stuff in corners of the world. In ER, I find myself focused on finding the right somber stones or Grave Glovewarts or looking up how to do some questline. I don’t think it is possible to figure out a number of the questlines without looking them up, then following a procedure. For example, I found White Mask Varre. Did his invasion thing. Was given a rag to soak in a maidens blood. There was no way in hell I’d have every figured out I had to go back to the very beginning of the game to do this, nor how to get back there, by just figuring it out on my own. Same for parts of Ranni’s quest (and I don’t think I’m done, but I’d have to look it to to know.) Part of me just wants to say screw it, I’m not going to worry about it, I’m just going to explore, but parts of the world are closed off unless you do some very specific, unintuitive things that require looking up.

I’m not quitting the game over this, I’m still enjoying it, just realizing as an open world game, it’s simply not possible to just explore and get all the way through the game. So I’m playing it for what it is. (A lot.)

Dark Souls games (and this is a DS game on everything but name) have always featured quests that would be unthinkable without looking something up. I don’t know why FROM does that.

I found the Dragon breath stuff to have value but only if your build was already going that way.

You didn’t mention vigor, get that to 50 or higher. The 9 and 10 somber stones probably aren’t available until late game. Consecrated Snowfield or Farum Azul.

Somehow I found a Somber 9 and 10 for my Moonveil, I haven’t done a lot north of the Academy and Caria Minor, nor far NW. I have done part of the underground.

There was no way in hell I’d have every figured out I had to go back to the very beginning of the game to do this, nor how to get back there, by just figuring it out on my own.

You actually don’t; there are a number of places where you can accomplish it, including at least one that you wouldn’t typically have visited yet.

How do I craft just regular arrows? I have thin beast bones and I have flight pinions, but everything I see are special arrow (magic, etc)

The first merchant sells a book that lets you make bone arrows. They are basically normal arrows.

Ranni’s quest does get you into an area or two you otherwise might not get into. Also there are at least 2 good spells towards the end of it.

Hmmm. I know I bought that book… From Santa the first guy, right? Not important really I was just looking at my crafting options (I have never fired an arrow at anyone.)

Speaking of arrrows, I somehow ended up the Lost Grace that looked familiar, and I realized it was the famous bird rune farm place. In spite of needing a lot of runes to upgrade, I just don’t have the time/patience to sit in one spot for hours doing the same thing over and over. I did try it, though, and it worked, and I discovered, if you’re a mage, sling rock sling at the bird is faster and easier than shooting arrows (and you have unlimited Rock Sling.) FWIW

You need only shoot one arrow and 98% of the time the bird just runs off the cliff.

I am surprised a spell would carry that far but I think that spot is designed for farming.

Rock Sling has a longer range than most, and it’s physical (as in it’s just huge rocks being thrown.)

Probably about the same; I just run up to the spot, hit the Rock Sling button three times without pause, and he’s running off the cliff. Again, I don’t have the patience to just do something like that for an hour or so, but good to know I can.

I can’t figure out if it’s worth the time to clear out all the weird guys there. I’m thinking not. Plus, they’re just minding their own business.

They are worth 20+k, but they don’t drop anything. There are some good items in the swamp you go through to get there though.

There is also a good defense talisman behind the birds.

You said you are using a soreseal, you know it increases damage to you by 15%.

I usually clear out all the weird guys. Bring an AoE and you can make bank pretty easy.

You said you are using a soreseal, you know it increases damage to you by 15%.

I am, but it is also the equivalent of several level ups. Sounds like a decent trade-off.

But if it breaks even then you could use something better. I have seen numerous videos saying soreseals should be dropped after you get to a certain level. The damage those 3 or 5 levels due will barely match the 15% damage penalty you take.

One, it’s hard to level up at this level

I use Godricks great rune and consume rune arcs for it. It raises all attributes +5 Did you try that?