They’re still decent, but are no longer the be all, end all. There are several now that bring in better profits. Check Commodities [INARA] under Minerals.

Thanks! I bought an ASP explorer and outfitted it as best as I can, but with mining lasers. I really dont understand any other kind of mining.
On my first trip, I just selected an astroid field which had…well, 10 astroids in it? And had no idea what to do. I used a scanner that scanned the area, and some of them lit up orange like. But also did so when I was told it was depleted.
I think I made…200000 or so, for about an hours work, which isn’t really efficient. So something tells me I am doing this wrong,

Ive read I need a prospector limpet - I cant seem to find those, though. I only have the collector limpets. And JUST bought a DSS I think its called, but havent tried it yet.

ANY advice is most appreciated :-)

There are a few Elite Mining guides and YT videos out there that will cover the basics (this one for example).

But the main thing that will help is there are two types of mining, and you need a slightly different setup for each.

The first is laser mining where you’re using your mining lasers to blast off chunks of minerals. The second is core mining where you’re planting charges into motherlode asteroids to blow them apart and get at the meaty goodness inside. If you want to maximize speed and profits, laser mining is where it’s at these days, but I prefer to core mine because I like blowing shit up (and it’s more interactive). 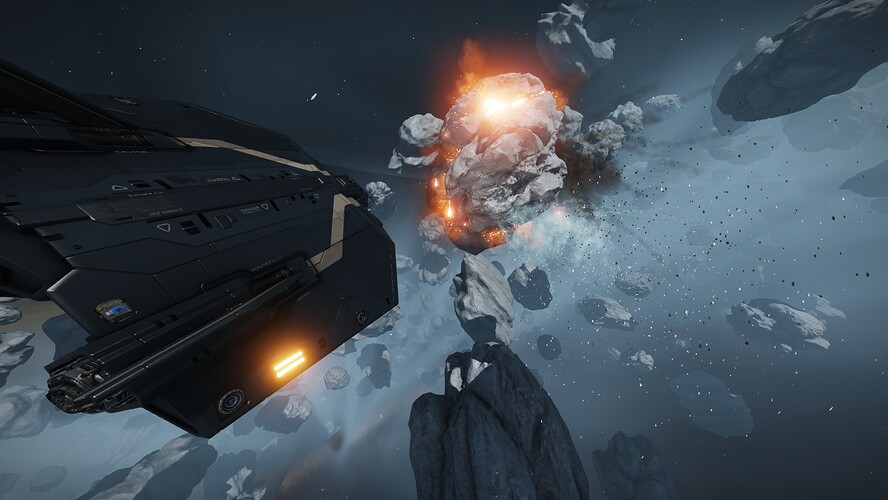 For each type of mining, you need to use a surface scanner on a ring (find one with pristine reserves, and hotspots that overlap on rings are definitely the best), then dive into the ring and proceed. If you’re laser mining you just need to use prospector limpets on any asteroid to find what you’re looking for, and then use your mining lasers on it and the goodies will chip off. Pick them up with collector limpets, and then use the refinery.

With core mining you have to pick and choose your asteroids, so you use the pulse wave scanner to look for motherlode asteroids. These have a slightly different look in the scanner, generally brighter yellow, and you’ll learn to recognise their distinctive shape after a while. 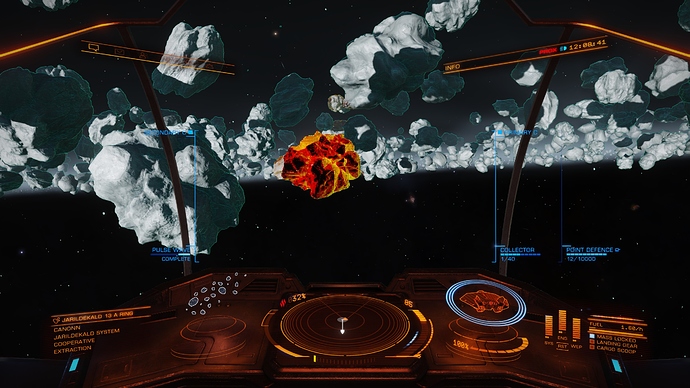 Then you can fire prospector limpets at it to see what it contains, and if that’s all good you use the seismic charge launcher to plant explosives in fissures and blow it apart, finally using the abrasion blaster to free the minerals, then use collector limpets and refine. Planting explosives takes some judgement so you get maximum yield. 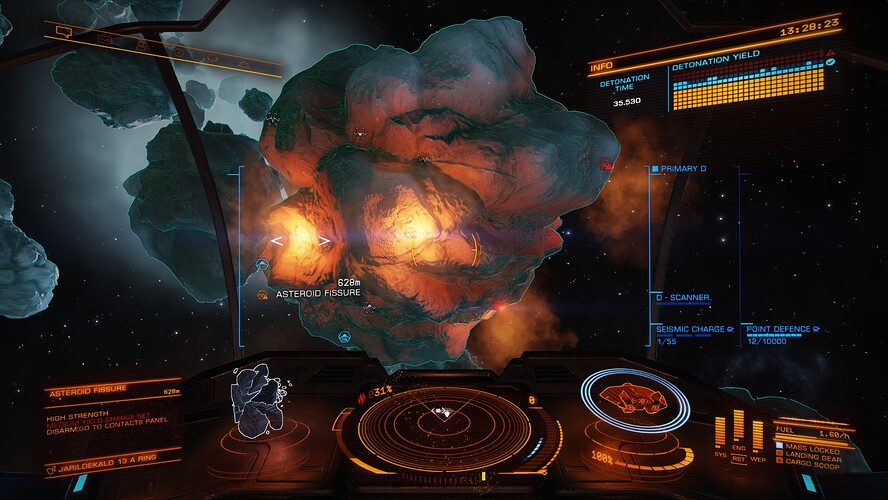 You can set up the Asp to do both if you want, I’d try both and figure out which you prefer doing, and then install the most cargo racks you can manage and go for it. But really, there are great guides which will explain the nitty gritty details if you like.

Mining can be very profitable once you do it right. Making 20+ million credits in a session is not hard.

That is really awesome of you, @krayzkrok ! Thanks a lot! I guess I don’t really know why I want to use a prospector limpet on normal astroids. And am I correct those can only be used on one astroid?

Again, thanks for writing all this up for me!

You use one prospector limpet per asteroid, it will tell you what its mineral contents are, and therefore whether it’s worth lasering it. With laser mining you have a decent chance of getting good stuff from a greater proportion of asteroids if you’re in the right place. With core mining you have to specifically find the motherlode asteroids or you’re wasting your time. Sometimes it can take a while to find motherlodes, which is probably why laser mining is better if you want to earn money faster - a bit more consistent. I just think it’s far less interesting, but YMMV especially if your objective is to earn credits faster.

I found an updated version of the mining guide that I used when I was learning, it’s good and thorough. While they recommend a Python I found the Asp Explorer worked really well. The only downside to the Asp is it brakes like an elephant on an ice rink.

Thanks again. There really is a lot of depth in this game.

I am looking a bit into engineers as well currently, but really - its so obtuse that I don’t understand how people figure these things out. I found a forum post on how to get Meta alloys, but…if one didn’t know that ONE port had them, then what?

There’s no shame in reading guides and using the various tools that are available, I think of them as reference manuals and installed apps on whatever mobile device my character is using in his ship. The two I use the most are https://inara.cz/ and https://eddb.io/ which you should bookmark and use when you need to plan and find shit. Then there are apps like EDDiscovery and EDEngineer which can read your logs and give you a lot of really useful summaries. It’s well worth it as you dive deeper.

Engineering is great for improving your ship, though it involves a lot of material gathering. You shouldn’t need that to get on with some profitable mining though. One thing that is definitely worth doing at some point is visiting the Guardian ruins and getting blueprints for Guardian tech. One in particular is essential, the Guardian FSD booster which can easily add 10 ly to your FSD range. You can go nuts with Guardian tech, but it’s best to choose and plan carefully so you’re not needlessly grinding stuff you don’t need.

Again, this is stuff you could theoretically figure out yourself, but is far, far better to read a guide and follow that.

All the people saying Krait Mk II are correct. That is all.

There’s a public alpha of Odyssey coming up at the end of the month, and a mission playthrough video just released to whet the appetite.

In the first mission playthrough video, watch Commanders team up and raid a hostile settlement in a combined arms operation in an Elite Dangerous: Odyssey pre-alpha build.

Odyssey has left me in such a weird place. For me, the one thing that really makes me go “you know, maybe I should install Elite again” is the VR aspect. It’s one of my favorite VR experiences, I just love it. But Odyssey won’t support VR so that kind of makes that problematic. Playing without VR makes Elite seem much less appealing, but switching between VR and non-VR every time I land sounds pretty obnoxious… 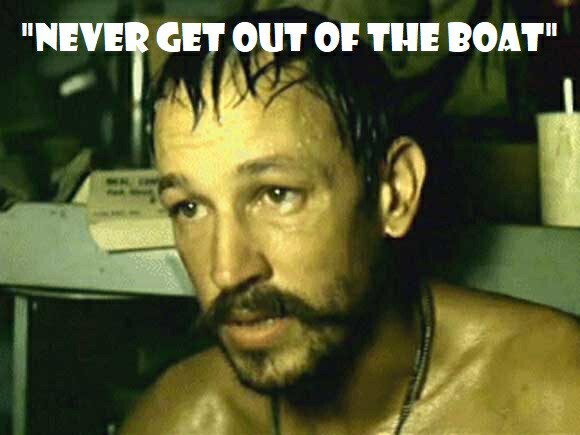 I will get odyssey. Probably have it preordered already. But I don’t ever intend to play it not in VR, so I will most likely hardly ever get off the boat. Do love the snazzy new planets and lighting tho!

I don’t really care about any of the stuff Odyssey is adding, but I might end up getting it if they gate improvements to the game more broadly behind the paywall.

They won’t. General improvements go to all of the game. Just the on-foot shit is gated. I’m getting it out of principle. It’s not a lot of money and I do want them to continue developing it.

Ya, same here. The last thing i want is to walk around. I get that some people really wan it, but for me it’s about focusing on what your game is really good at. Elite is really really good at space flight and they should focus on that rather than walking around place.

Still i’ll get it for the same reason. And hoping that entry into atmosphere is really cool.

Hopefully there are lower levels of security which make solo missions feasible. The example in the video heavily implies you’re hosed if you don’t have at least a 3 person team including a ship to dust off on cue.

Ya, same here. The last thing i want is to walk around. I get that some people really wan it, but for me it’s about focusing on what your game is really good at. Elite is really really good at space flight and they should focus on that rather than walking around place.

I’ve talked to my friend about this exact same thing after I saw the Odyssey footage recently. I’ve been following space games for a while now (10 years+ minimum) and I can’t recall a single instance where the walking in stations or other form of the same mechanic actually worked out. It’s just too big of an obstacle on a technical level, you can have the world’s best engine for space sims and there are absolutely no guaranaees that it will translate into planetary landings or first person shooters. Case in point is Elite’s very own planetary landing DLC, it’s just not up to the same standards as the main game, and from what I’ve seen of the Odyssey footage so far it will be even worse.

I agree. It’s insane that frontier decided space legs was their hill to die on.

Oh I don’t agree that planetary landings aren’t to the same standard, I think they’re exceptionally well done including the SRV mechanics and provide some of the best vistas in the game. I think they could be fleshed out more, greater variety of planets to land on, more settlements, more life and geological anomalies, etc. In theory the idea of getting out of the SRV / ship and interacting with things excites me, but everything they’ve shown so far implies this is very much team-based combat FPS focused. That has zero interest for me. I want solo content that’s more in keeping with the rest of the game (exploration, trading, finding weird shit, as well as combat) so I’m hoping there’s a lot more to this than what they’ve shown.

Oh I don’t agree that planetary landings aren’t to the same standard, I think they’re exceptionally well done including the SRV mechanics and provide some of the best vistas in the game.

We’ll have to agree to disagree :). 5 minutes in the SRV and trying to navigate it around small obstacles or making minor corrections to your trajectory and you can tell the engine wasn’t built with this mode in mind.