Docking is fun. One of the few times stick skill really is felt in the game.

I’ve never bought a docking computer because it’s a waste of a slot better used in other ways, but I presume you can turn the thing off when you want to? I can’t imagine not having manual control to pull off those sneaky, high-stress stealth docks when I had a hold full of… ahem… contraband.

Krait Mk2 and python are pretty interchangeable and both do a good job at just about everything. I like my python more for mining, and the krait for combat/exploration - but mostly cause i really dig having a hangar bay, but to each their own. If the vulture is working for you(and I loved the vulture), i’d stick with it until you get the krait/python - there’s a few ships between that are alright, but they’re more life a side-grade and up half a step. If you did really want to do this, I’d probably say the chieftain is the best bet of the lot.

My biggest tip for anyone starting out, or for people don’t know about it, get ED Discovery. It doesnt matter if you do combat, exploration, engineering, trading, or anything, this tool just makes the game better.

Thanks. I’ve more or less already decided to try the Krait because I mostly do combat anyway and don’t have much interest in hauling stuff around. Are there any good options in mid hull class? From what I read Chieftain is quite nimble (although I guess outclassed by Krait in pure firepower) and a good overall combat oriented ship and the Federal Gunship is supposed to be a beast too, but I don’t have ranks for those. I’m still interested in trying both FAS and FGS though - are they worth it in your opinion?

And a bonus question - is it possible to manually pilot the launched fighter from Krait? Because that would totally tip the scale in its favour :).

Elite Dangerous continues to perform well through an engaged and ever growing community of Commanders. During 2020 Elite Dangerous hit its highest ever player numbers shortly after the Fleet Carriers update at Easter, and then again higher still since on multiple occasions, including just before Christmas. There is a great deal of excitement around Elite Dangerous: Odyssey both outside the Company and within. Over its lifetime Elite Dangerous has already generated over £100m in revenues, with over 4 million base game units sold. A successful strategy to seed new players in advance of the launch of Odyssey yielded an additional 8 million base game owners through the launch of Elite Dangerous on the Epic Games Store in November 2020 including a ‘Free Week’.

As always we are committed to delivering a high quality experience through the release of Odyssey, to a large and engaged player community with high expectations. Odyssey is coming together well, despite Covid-related challenges with collaborative working on such a large project, which are resulting in some inevitable minor delays.

Having reviewed project timelines to take into account the renewed need to continue with remote working for the near future, as well as our commitment to release only when we are certain that the experience for our players, on all platforms, will be as enjoyable as possible, our launch plans for Odyssey have now been updated.

Elite Dangerous: Odyssey is expected to release on PC, the biggest platform for Elite Dangerous, before the end of the financial year (which ends on 31 May 2021), albeit slightly later than our initial target for Q1 2021 (January to March). This will be preceded by an alpha period. Our plan for PlayStation and Xbox is to submit console versions for approval as soon as possible after we have released on PC, rather than putting the console developments of Odyssey under additional time pressure by planning for a simultaneous PC/console launch. PlayStation and Xbox console releases will therefore now come in FY22.

I haven’t tried the gunship, so i can’t speak to it. However, i was in the exact position you seem to be in - i loved my vulture, but i was finding it stretched in some of the tougher combats (and I never had anything engineered at that point), so i was looking for something with more heft till i could afford a python. I tried the FAS first, and frankly was flat out disappointed - it flew like a brick and performed worse than the vulture(though i may have expected too much for it). I then when to the chieftain, and while i enjoyed it more it wasn’t the straight-up glory that I had envisioned. I flew it till i got my krait and shortly afterwards, sold it when i realized i was never going to fly it again.

My advice. Save your money. If you haven’t yet, unlock the guardian FSD booster (it’s not terribly hard, just takes a bit of flying mostly). Start engineering - it’s somewhat painful to start, but once you get going and get the hang of it, it’s a game changer for anything/way you want to fly. But an engineered vulture is pretty wicked.

And a bonus question - is it possible to manually pilot the launched fighter from Krait?

Yes! But doing so means you put your AI pilot in charge of your ship. Still, it’s a hoot (you can also have friends join in and fly it, which is also fun).

And a bonus question - is it possible to manually pilot the launched fighter from Krait?

Yes! But doing so means you put your AI pilot in charge of your ship. Still, it’s a hoot (you can also have friends join in and fly it, which is also fun).

Same for my old Anaconda fighter. Incredibly great fun! I used it as an exploration scout as my anaconda followed me around on the ship as I flew over the planet surfaces in my fighter :)

Thanks for that first hand info! I’ve decided in the mean time to keep the vulture as is and slowly upgrade it but I will also be buying a Chieftain very soon - I had a look at Krait but right now I’m unwilling to part with docking computer, interdictor, cruise assist and collector limpets and all 4 are much easier to fit on a Chieftain when I don’t lose one slot to a hangar bay.

edit: Here is the Chieftain build I had in mind. Unfortunately I had to drop one module protection to fit in everything I wanted but I think it looks ok. Should I make any changes? The weapons I’m still undecided on because I’ve been flying gimballed only up until now. I fly with FA on exclusively.

I’m starting to get the feeling that space police shows up by default in some of these ‘high end’ assassination missions - dangerous and above let’s say. Yesterday I took a few master level contracts in the range of ~2.5m and beat them with ease in my non-engi Vulture thanks to about 4-5 security ships that joined the fun every time.

Is this normal behaviour or does it depend on my rank (currently Expert) too?

It depends on a setting in your right hand screen, ship tab “notify authorities” or somesuch thing.

Do you mean “report crimes against me”? If so I don’t think that’s the case, because the ships are already there when I jump (not always, but sometimes). And I’ve read that if you’re doing a mission from another faction’s perspective you end up fighting the same security forces.

Nice ship, I bet she’ll serve you well. I would exchange the point defense for a chaff launcher.

Good call, I will definitely try it out since point defense I have now on Vulture is hardly seeing any use.

So I actually ended up buying both ships today and flew them for a couple of hours - and while both have their pros and cons I really prefer the Chieftain due to its agility, plus I don’t have to keep an eye out on the fighter - although I do miss them sometimes because they can be a great distraction vs tougher targets.

Here is the build I’m using atm, but I will likely tweak it a bit more - maybe even drop limpets once I stock up on mats and add 2 more hull reinforcements instead of cargo+collector.

I will probably try the Frag cannons at first opporunity.

I look forward to revisiting Krait once I get engineering going finally though.

Finally having gotten over the shock of being transported back several thousand lightyears in a fleet carrier (the equivalent of going to sleep on the bus and missing your stop, kinda) I’m making the most by exploring this new area. Turns out I’m quite close to the Coalsack and associated nebulas, so I may as well take a look. Quite what a black nebula set against a black sky is going to look like, I can only imagine, but nothing ventured…

I started in Soontill, which is a system apparently featured in The Dark Wheel (the original Elite novella), yet somewhat disappointing in actuality. After seeing a few sights along the way, I’m now getting close to the Coalsack, but first I seem to have blundered into some kind of interstellar conflict and I’m currently cowering on a fleet carrier hoping it isn’t scheduled to head to Sag A anytime soon. 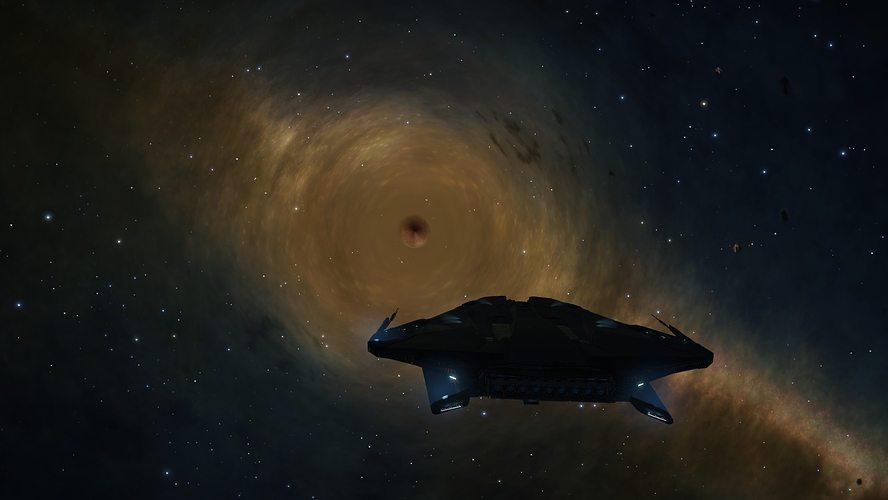 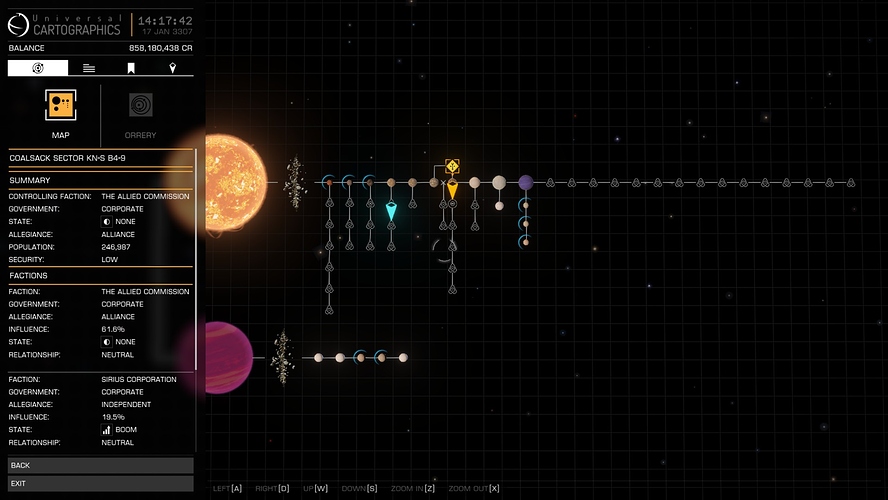 Finally having gotten over the shock of being transported back several thousand lightyears in a fleet carrier (the equivalent of going to sleep on the bus and missing your stop, kinda)

Can you elaborate on this? Did you buy (and flew) the fleet carrier or did you have someone transport you? I’m still learning the ropes after a long absence and I’d love to know more about the various systems the game offers.

That’s exactly what happened. I was in Formidine Rift visiting ancient Thargoid sites, found a Fleet Carrier, docked for the night… which ended up being several months because some other game came along, and I was whisked away to wherever the Fleet Carrier owner decided to go.

I’m not sure what warning you get of this happening, whether it’s even safe to dock overnight. To jump, the FC needs a certain amount of resources which you can check on the status screen, but other than that I guess logging out on one is a potential risk.

That’s pretty cool, thanks for the explanation!

Leaving the fleet carrier which has fortunately not gone anywhere. Turns out this system was attacked by the Thargoids recently, hence the military presence. 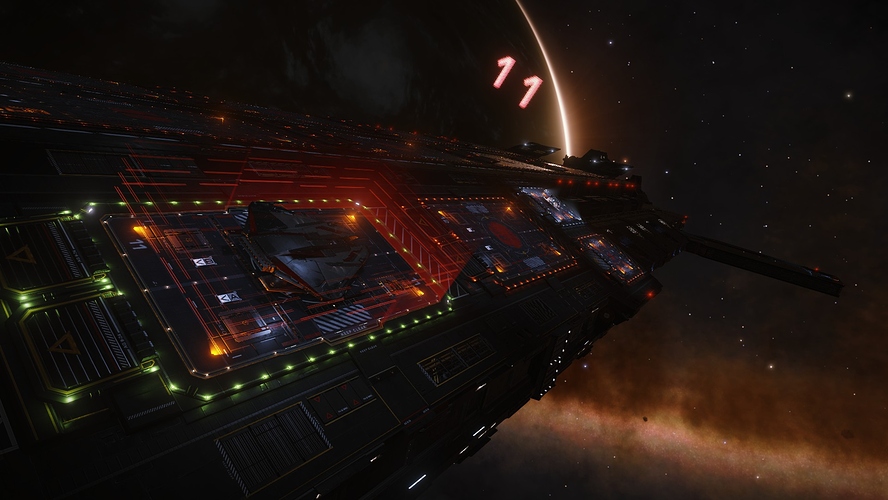 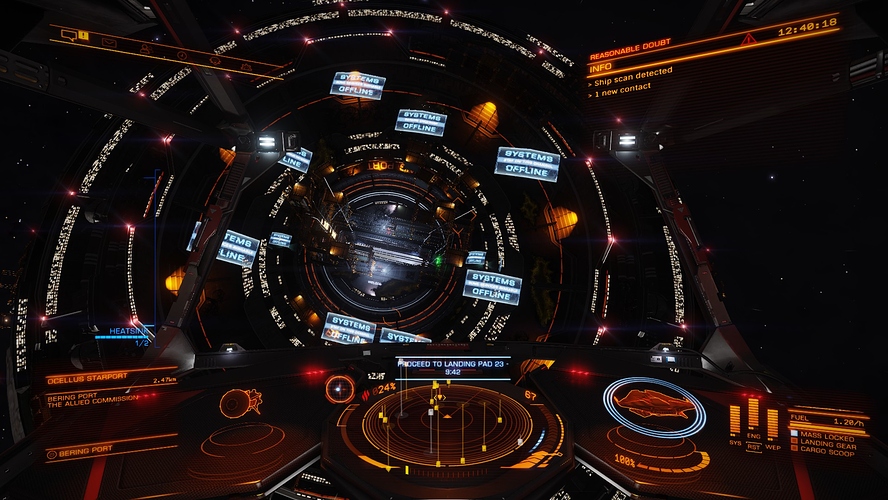 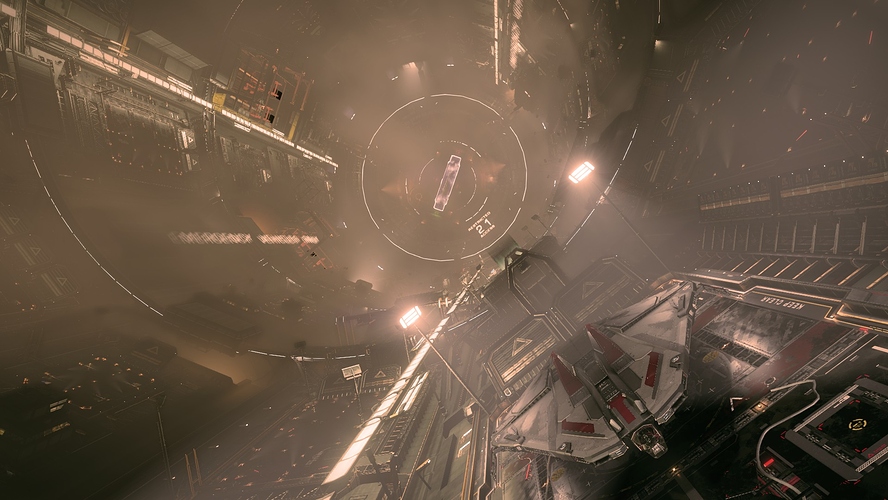 But I decided not to hang around and keep going. Going where exactly, I don’t quite know yet. But I found a Wolf Rayat star, and it’s so pretty. 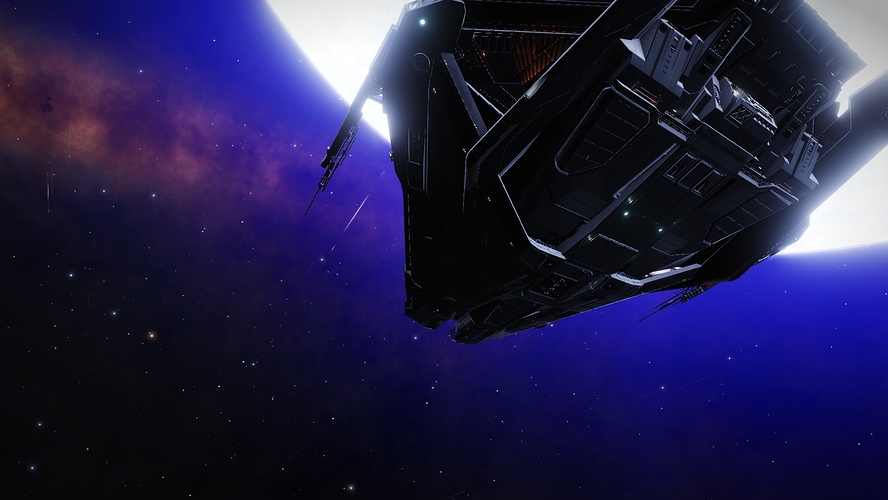