Conan Exiles next week. Is it any good for singleplayer story player like me? Or is it just for MP survival sandbox nonsense.

Nice! Once again waiting for a game to exit early access, then forgetting about it, pays off.

Also HUE is free next week.

The way it handles nudity is, I think, a positive moment in gaming so I would urge anyone who cares about the art form (as I know you do) to grab the free copy on Epic or buy the PC version on Steam and check it out at least through character generation. Its one of those “oh all games should do it that way” moments.

The way it handles nudity is, I think, a positive moment in gaming

are you talking about the physics-enabled dongs

When aren’t people talking about that?

Conan Exiles next week. Is it any good for singleplayer story player like me? Or is it just for MP survival sandbox nonsense.

I went in expecting no story at all and was pleasantly surprised by the (admittedly) lite story. The Exiled Lands has a story to tell.

I loved following the Journey. The downside is that it makes games that don’t have a Journey, like Ark and NMS, unplayable for me.

The way it handles nudity is, I think, a positive moment in gaming

are you talking about the physics-enabled dongs

Goddamn right! :) Actually more the fact they put in both genders full frontal nudity in at ALL and did it in a pretty sensible way.

I play it exclusively single player, or a few times with my GF so far. I have…check steam 309 hours in it so far.

Its an amazing experience - Its a world ripe with lore, and you can almost feel the heat in the desert, the humidity in the swamp, and the cold of the frozen north.
The combat is great, but rather gory and over the top - Something I don’t enjoy normally, but I got over it. (Obviously).

But what REALLY shines here, besides the rather vast world to explore, is the building system. You can build ANYTHING - Simply anything. The basic building blocks are a square and a triangle - from that, you can build round towers, and whatever your imagination lets you dream up.

One thing I might change if I were you, is the amount of harvest materials you get, once you start harvesting. I use the game mostly as a chill out experience, just having fun, and harvesting is part of that, but I think you may have less patience for that, so increasing that, decreased the amount of trees you have to fell and so on.

Anyways - I hope you try it out, and let us know your experiences in it! Also, I would be happy to join up if you think that could be fun some day :-)

All the building below are by me. (Edit - not the massive hand with the two towers.). 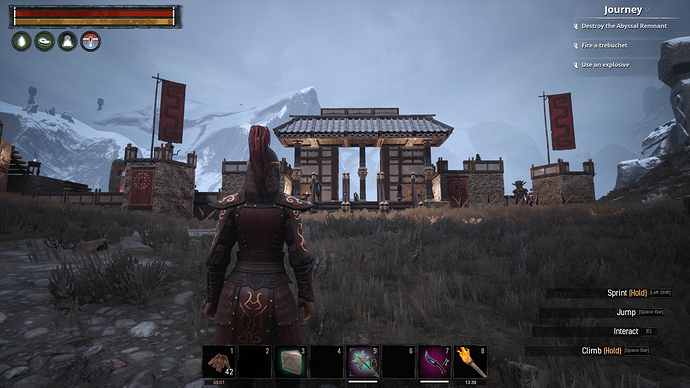 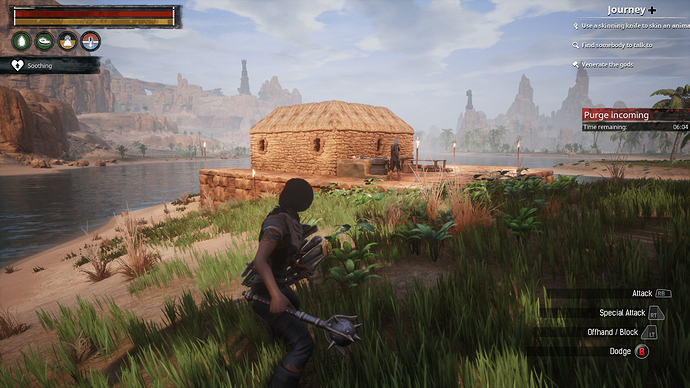 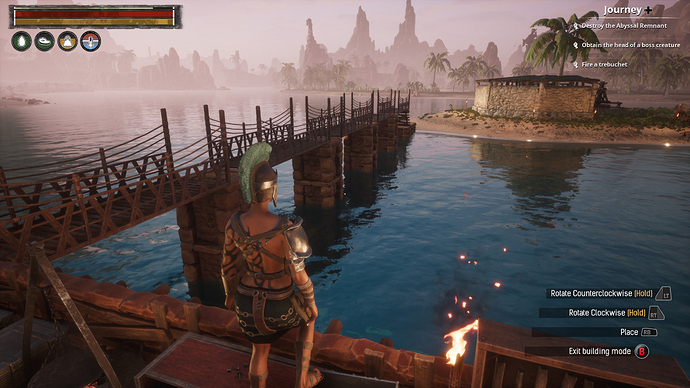 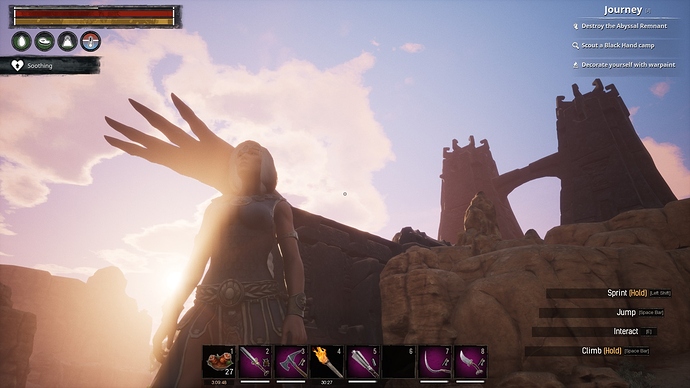 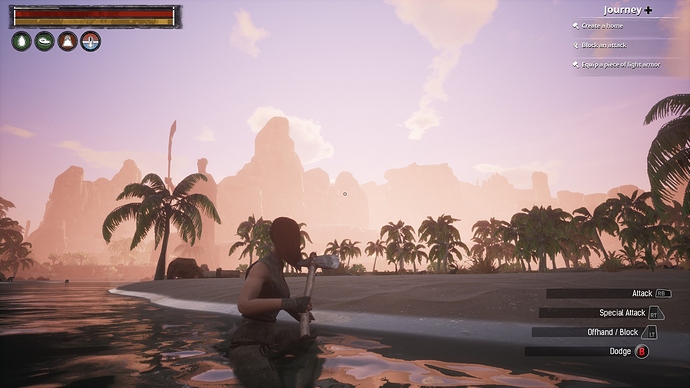 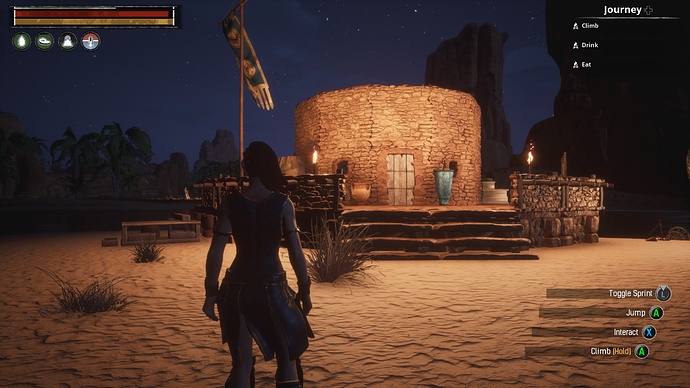 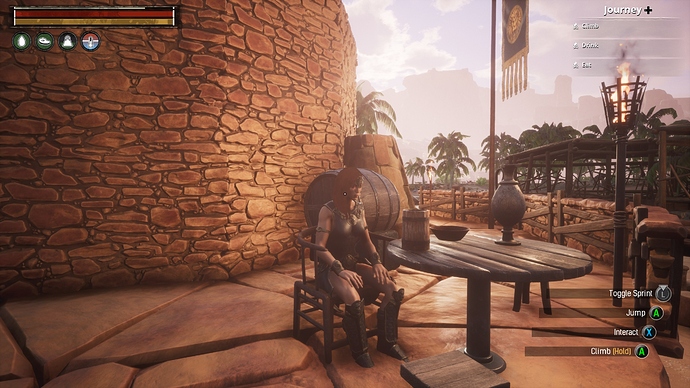 The thing that trips me up when I play this game is, I have no idea where I should settle down and build stuff!

It seems like it’s a building-focused game but there’s so much to explore too. Do you make a home base near the start and venture out from there? Build something temporary early on and then uproot later for greener pastures?

I never got very far but it did seem like a cool game. I even had the DLCs wish-listed for a while there before I figured I’d probably never use them.

Depends on what you want - Personally, I always started with a small home near the water on the first river - just to have a base with a few crafting stations as well. It kinda also depends on whether you find it fun or not - You can go through the game with minimal building but you will need a few things eventually that you get from crafting stations.

For now, I would just start, build a small home, learn the systems slowly, and just explore around you.

A basic rule of thumb is, that the further north you go, the more dangerous things get.
Oh, and you can bring thralls and domesticated pets with you now - and even ride on horses if you are so inclined!

Just explore, chill, dont worry about doing things the right way, and explore the world kinda like you would a real, new world :-)

Cool, thanks - you are firing me up to have another crack at it! I think I’ll play this weekend.

Nice! Pop in to the Conan exiles thread or ping me if you have any questions - I so enjoy getting new people into this game!

Oh - one least thing. You have a bunch of mini-quests on your display - Those are kinda guidelines to what you should do next. Its nice to look at, if you ever are a bit unsure on what to do. One thing I would avoid though, is doing dungeons yourself, until you are a bit more experienced. They are great, but somewhat difficult.
But the first ones are like “Kick”, “Eat” and so on, and are just basic pointers. Anyways - have fun!

I never read a Conan story where he built something. If you do not want to build, is there enough game in it? I think i have it on PS4 as a PS+ game, too

Nope - You will have huge issues continuing and advancing if you don’t build or craft at all.Its one of the core pillars of the game.

I’d suggest if you are curious, to get it -its free, after all! And then try it out. Maybe you will be pleasantly surprised :-)

thanks, I think I will try. I love the Conan universe, so just need to find some time for it ;)
I like the hardest difficulty setting in Noman’s Sky, is there something similar? Permadeath mode?

Not a permadeath mode, no - But there is a hard mode true. Health doesn’t regenerate and a few other things. You can customize a LOT in the advanced settings, which is pretty nice, I think, but when you start a game, you get to choose between three difficulty settings. It just sets the starting conditions for you, and if you want to change a part of it later on, its rather easy to do so.

Anyways - sounds great! Have fun, and I look forward to hearing about your adventures !

Very enthusiastic. So it does have some (lite) story too as Balasarius said?

I enjoyed F76 a month back, for the exploration a bit of a narrative, so if Exiles scratches similar itch I might like it too.

Funcom is my CDProject Red ;-)

Not much, and not at all like in Fallout 76, even though some of the gameplay is comparable. It has some enviromental storytelling, and it has some ancient rocks telling the story of where you are, and why, scattered throughout the world - oh and ghosts, replaying their deaths, and also part of the worlds lore. And a few other scatterings of texts, and some people you meet as well.

Well, I was about to write you don’t follow a storyline like in Fallout 76, but thats strictly not true. There is a way out of the place, and that is the story, so to speak, but that part is …well, I’ve never done it, but then again, after 1000 hours in Skyrim I still haven’t completed the main quest there either.

As I said earlier though, if I may suggest something - its free, try it, give it a few hours and see if it clicks or not. For me, its an extremely relaxing world to enjoy, and its so damn pretty at times as well.

Hope you enjoy it!

I’m definitely looking forward to trying Conan for free - @Razgon are you on a certain server?