I absolutely love this stuff:

If anyone wants to have a laugh, DrDisrepect is trying to learn the game on his own right now.

Also Tarkov has been the most streamed game on twitch for the last couple of days.

They are doing a drop event right now if you link your accounts.

he is pretty hard to watch tbh as an experienced player,haha, so many mistakes. he needs a person to come on and help him navigate lol.

got a friend who is only 3 quests away from getting the kappa container. pretty amazing.

I cringe everytime he reloads and drops the mag on the floor.

got a friend who is only 3 quests away from getting the kappa container. pretty amazing.

I’m still struggling at doing the punisher pt6 to get my epsilon, im average at shooting and this quest is forcing me to pvp so much hah

I have not played in so long, I think when I do go back I’ll have to relearn everything.

The most difficult part of the game is understanding the 3 million bullets types for each weapon, i still have to check an excel with all the ammos to know what the hell is the difference between them.

its not that hard. there is only a few good bullets really.

5.45x39: Igolnik / BS ammo is the best in slot, with BT and BP being the second choice. Everything else is so weak that its unusable and I don’t reccomend ever using it.

7.62x54R (mosin ammo): 7n1 can one tap to the chest on level 4 and below armor, SNB can pen higher but lacks the one shot kill potential

7.62x51: M80 is pretty good because its got 80 flesh damage exactly (one tap to unarmored chest) but kinda low pen, so it won’t kill players in one hit if they have class 4 or above armor. M61 is the high class, high pen round. m62 is middle. everything else is bad.

9mm: ap rounds are going to be the only good rounds and even they arent great at this late of the wipe but still. If you don’t want to pay that, go for pso gzh or pst gzh

here is a simple refrence that should be updated for the current patch: 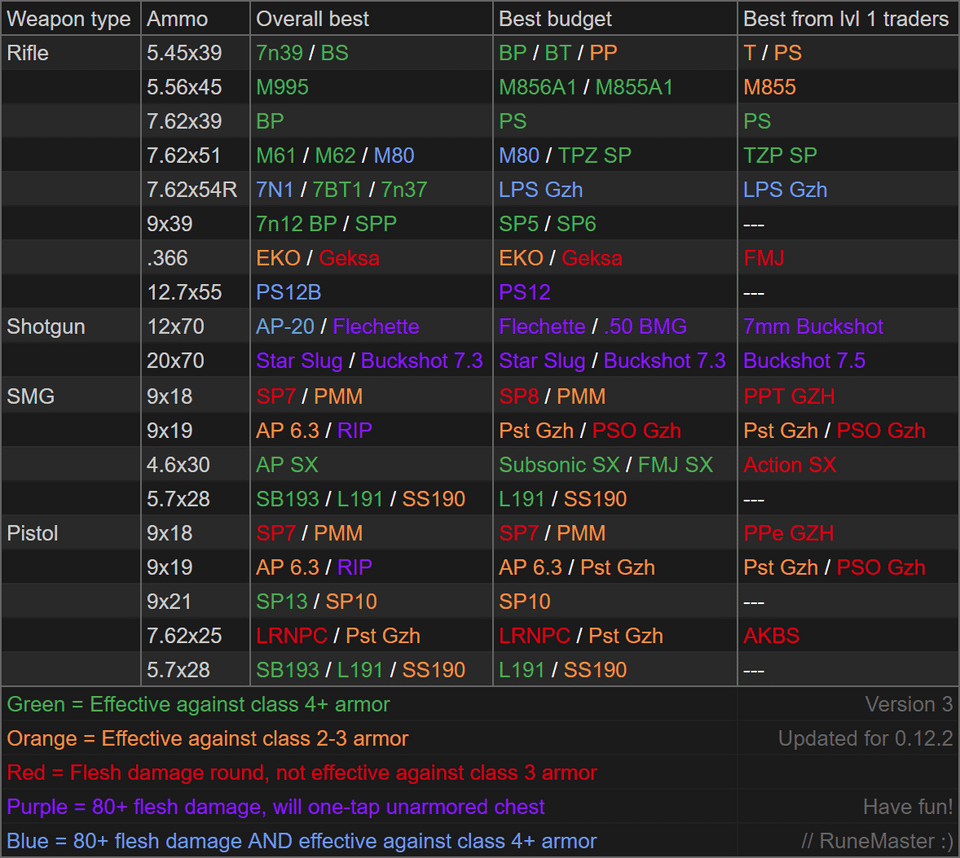 and here is the long form so you can see the bullets:

Yeah im using the exact same charts, what i mean is, i still have to check the charts because i cant remember which bullets is what and if it was M80 that one that one taps or if it was M61. Just hard to remember all this stuff.

Also the servers are getting hammered so hard with the influx of new players getting disconnects a lot.

ye servers SUCK right now with the drops. it will fix up soon.

My friend just unlocked the Kappa container. We did have to help him cheese with a few of the quests (we gave him 4 grenade kills for that quest and we also cheesed the "kill 3 players in one woods raid with mosin because CHRIST it’s painful). He did everything else legit though, including Shooter Born in Heaven.

Nice! I don’t ever expect to ever reach that quest, the jaeger missions are already giving me nightmares and it took me forever to get the epsilon even after rushing the punisher quests.

Servers been better for everyone else the last few days?

I’ve watched JM play a ton of this – it is pretty nice.

Somehow prefer watching the bricks being laid and the logs getting split.

they have been adding a LOT of new servers. the dev explained that they were expecting a small, niche audience for the game, maybe 20-30k average players. but they’ve been getting up in the hundreds of thousands simultaneously regularly now…

i miss the times of literally 0 matching times lol. these devs work their asses off and are more open then most about the dev process so id trust them to fix it. might take a few weeks to get more reliable stability

Well, it’s a lot better than 2 weeks ago already. 20-30 minute queues were not optimum hah

I gave up last week when it was taking me around 8-10 minutes to get into matches. I really love the game, but until they get the servers sorted out it’s pretty unplayable. Think I’ll give it a shot tonight and see how it is.

you guys have all the servers selected manually right? that helps me get into games way faster… also, you can try checking a single server that will be dead at that time of day (eg: miami in the middle of the night, i can sometimes connect to seoul, maybe some european servers. Phoenix is dead sometimes)

I’ve gone back and forth on it. It has been decent on auto lately

I played a bit today and it was MUCH better. About 2 minutes to get into my scav runs.