For those wanting to buy Idaho, check the Northwest bundle. Good discount there; if you have everything else in the bundle, you can effectively buy Idaho with a significant discount.

I bought it, actually, and I’ll do my best to participate in the current World of Trucks event. Some nice rewards there, I hear.

Nice tip, although in my case “significant” means £2.11. Don’t really care about the paint jobs pack I don’t have.

Since I don’t have Washington or the Forestry Equipment DLC, the extra 30% off on the NW bundle comes to $8 something.

I think I’m gonna hold off for a while–just too many games plus work and IRL BS to deal with.

You have my attention, sir!

(runs off to check Steam)

Honestly, I’ve never used the paint jobs and only a couple of the cabin decorations from these things. So I don’t know why I enjoy doing them, but I do.

I want this little thing: 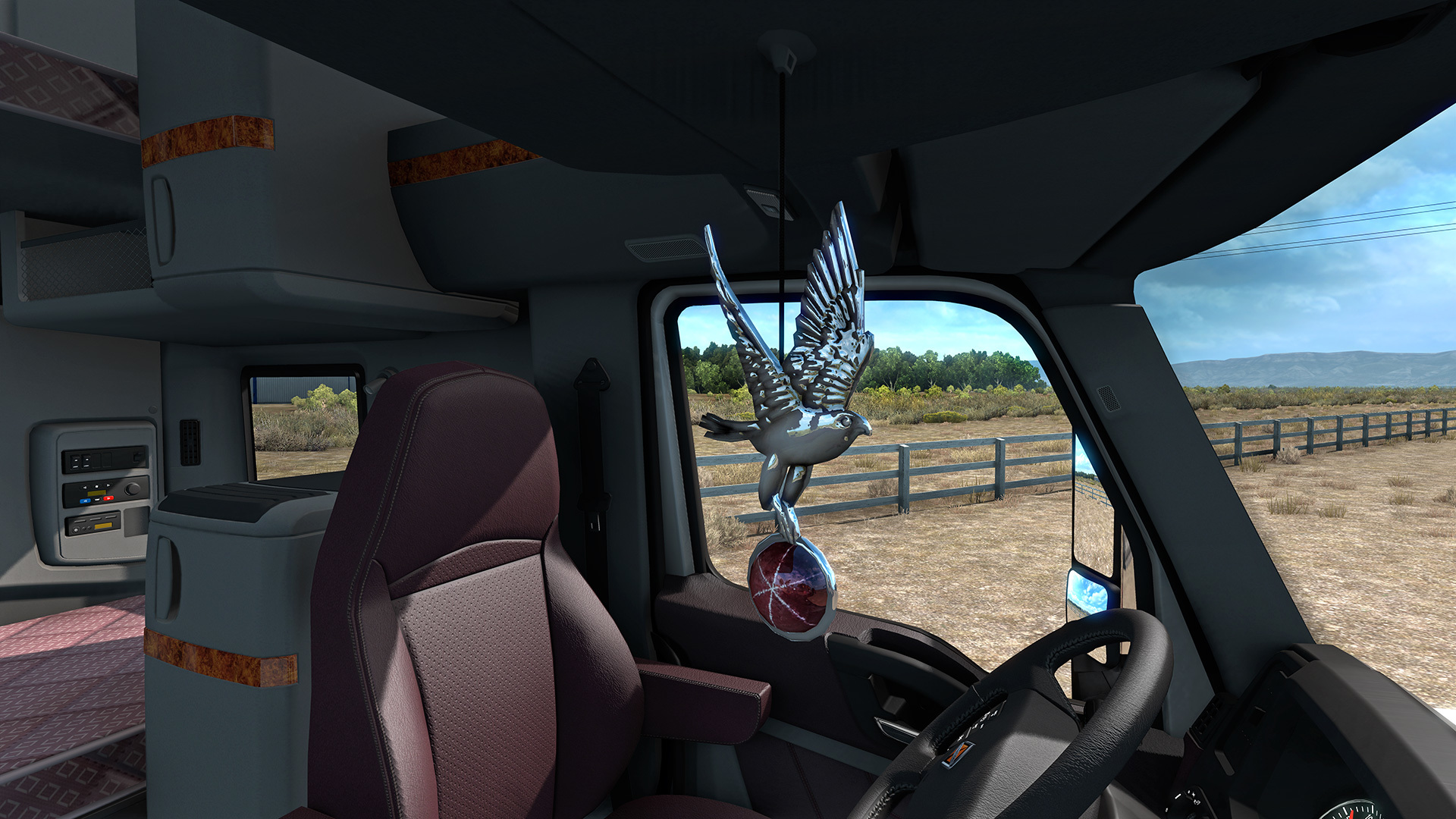 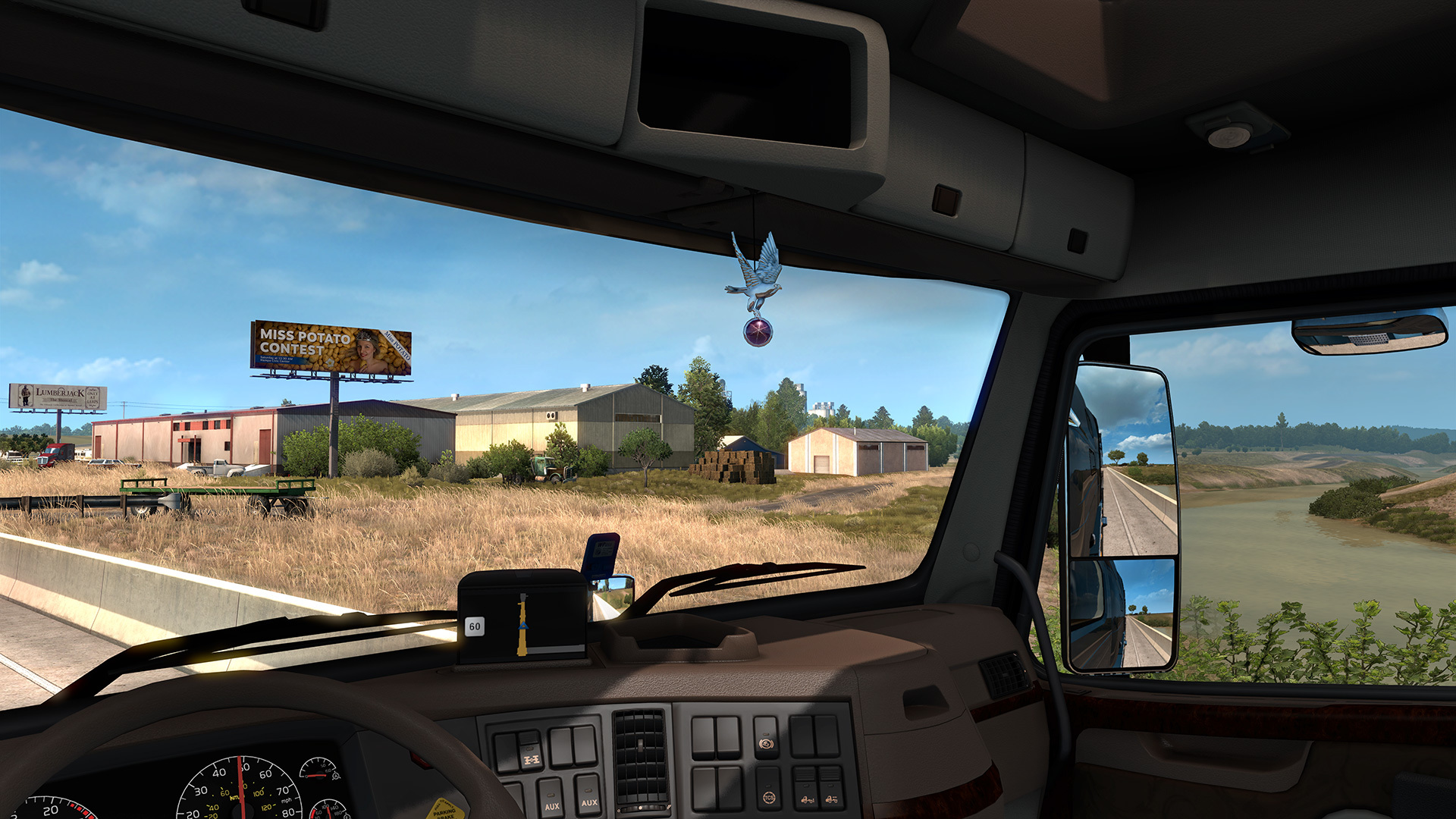 I’m partial to this guy from “Operation Big Sur” that commemorated the re-opening of Hwy 1: 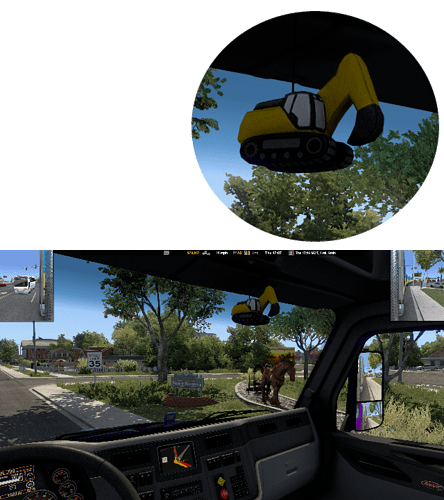 I’d cross-post this post if I knew how to cross-post.

I mentioned a few mods in the ATS thread that I particularly enjoy/can’t play without. They got favorable “oo, I didn’t know I need that until now!” responses. And the even better news is that all the mods I use also have ETS2 editions.

So I thought I’d mention these here:

AI mod for the traffic - adds more traffic and tweaks what appears when based on time and location
Top Corner F2 Mirrors - moves the mirror insets aaaallll the way into the corners
minimal adviser interface for ATS & ETS2 - top bar version - changes the advisor info pane to a little bar; there’s also a version that puts the bar at the bottom

Pretty much the only mod I use now is ProMods. It’s an excellent map pack, but it requires all of the official map DLCs.

I had been using a sound mod I created for personal use that reduced the noise level on turn signals and driver yawns by about 15-20dB. Patch 1.37 broke my mod, but also rendered it unnecessary by adding separate sliders for interior and game sounds volume.

One tip I’ll give is to go into the config.cfg file and find the line that reads ‘uset g_bloom’ (no quotes). Set it to something like 0.2 or 0.3 for a more reasonable bloom level IMO, or just use 0 to turn it off. SCS really ought to add a setting for bloom intensity in the graphics options.

I downloaded the demo of ETS2 and I tried to play it with an Xbox one controller. I can’t seem to figure out how to look around in the cab, which seems kind of important for seeing other traffic. What am I missing?

I play with a Xbox 360 controller and I use the right stick to look around just fine.

You may have to bind the controls yourself if the gamepad is not working how you want it to.

Just in case anyone was wondering, I had some head tracking software that was interfering. Once I Uninstaller that, all was ok.

Oh, interesting, now I wonder if that’s what caused my right stick to stop working - timing seems about right though I’m not 100% certain it started after I reinstalled ED Tracker. Now that I have the face tracking set up on Flight Sim I might as well uninstall ED Tracker anyway.

ETS2 supports head-tracking, so you can use your device to look around instead of the gamepad. I recommend it, as it’s much easier to check for traffic, look into a turn, etc. Not sure about face-tracking though, haven’t tried it.

If it supports Open Track I don’t see why it wouldn’t work.

So now I’m obsessed. I bought ETS2 a few days ago just because ($20 is pretty low risk). I was having a bunch of fun, bought the cheapest truck (wish I had waited and gotten the second step up, but whatever). Then everything went on sale yesterday, so I bought ATS and an embarrassing amount of DLC (all of the map packs, the cargo packs, and some of the flavor stuff that was in bundles). Wow, that expanded the map. My wife is from Romania, so I’m hoping to get there eventually (based in Frankfurt) before I get bored of the game.

I tried ATS for a little bit this morning. I live in Phoenix, so I thought I’d check it out. Boy, ATS seems a lot harder. I dunno, maybe the trucks are bigger. I quit after getting an assignment with one of those double trailers. No way am I ready for that! So I went back to Europe. I’ll save the new world for another day.

What gameplay settings do you guys use? I switched over to manual transmission. I’m not sure if it’s worth the hassle. I am also trying to park using only the mirrors. So far I have been successful zero times. I have no idea what a lot of the other settings do.

Mine are pretty much default. After the first 20 hours or so I turned off sleep requirements (at that point it adds little more to the game than busywork - but I recommend keeping it on until you learn to manage it), and I also tuned traffic events (blockages, etc) down a little bit in ATS because I thought they were too frequent. That’s pretty much it.

I use auto (or semi-auto?) transmission. Manual can be too complicated in a gamepad. And as far as driving and parking goes, I never use any cameras other than the first person view. It’s a simulator, so I’d rather simulate. It’s hard, yes. You’ll need a little time before you get the hang of it, and it’s by far the hardest challenge in the game most of the time, but it’s very worth it.

But while you’re learning to park, it might be a good idea to use the external camera to understand what you’re doing, and then only do it first-person. Your call, obviously.

When parking, make sure you have eyes on the rear most wheel. That’s where the pivot happens. Position it well, and your parking/docking will be fine. This applies to real life too. In fact when dealing with confined parking space, backing it in is easier, safer and quicker once you learn how to aim with the rear wheel.

Also, are there any other DLCs that are must-have? You know, since they’re on sale. :)

Must-haves are the new areas/states, of course, and if you like more job variety, the DLCs that add new cargos/trailers (Special Transport, Heavy Machinery, etc). The rest is pretty much cosmetic.