Every table is too small for Ottoman Sunset, one of Victory Point's best solo boardgames

As I've written above, I think Cruel Necessity is an awful use of the state of siege system, but I'd love to hear why you highly recommend it. It's a bit much expecting people to watch some turgid half-hour instructional video. Instead, you should tell us why you like it!

I'm bad at any math involving time zones, centuries, and long division. Thanks for the correction!

First off, sorry if I broke any rules of etiquette by posting a link to a play through of the game. I have deleted it as it strikes me as having caused some animosity. That was certainly not my intent.
Secondly, as for Cruel Necessity, I enjoy the game for quite a few reasons. The sense of urgency the encroaching armies lend to my games as they march towards London. The history that is crammed into each card (I'm a history nerd, what can I say). The mini-game found in the battle system. And yes, the Battle Poodle.
I enjoy the give and take each turn as I try to manage my actions on the main board, actions that I will often agonize over for minutes at a time, while still trying to maintain a presence in the (admittedly very abstracted) political scene of the game. I would have preferred a bit more in that latter arena, truth be told. But there's enough there to give it a bit of gravitas when combined with the historical events that cause it to shift.
It's a very tough game. But it never feels like a game in which winning is impossible. Pieces click into place like tumblers in a lock as you watch the Irish enter the fray should you fail to pay attention to the west, or the Scots rampage if you forget to cast your eyes north from time to time. Yes, it is a game of tracks. But those tracks are beautifully coordinated in my opinion. Coordinated in a way that the sense of history they're attempting to impart just shines through.
Well, for me anyway. At the end of the day, this is just my opinion. Sorry to ramble on.

No animosity, although your link did -- for some reason -- cause Disqus to put your post in the pending bin with spam. I started watching the video, but decided I didn't have thirty minutes to listen to some guy explain the rules of Cruel Necessity. :) I'm already plenty familiar with them. And don't apologize for "rambling on". That's what a comments section is for!

Have you played other state of siege games? Because the stuff you're describing -- the urgency, the give and take, the difficulty level, the piece clicking into place -- is inherent to the state of siege engine, even at the most basic level, like Levee en Masse, which attempts the French Revolution.

If it's your first state of siege, I guess I can understand your enthusiasm. It can be a cool system. But Cruel Necessity is such a confused design compared to Dawn of the Zeds, Ottoman Sunset, Habsburg Eclipse, or even the tactical Zulu on the Ramparts game. I recommend you give one of those a shot to see how much better stage of siege can be used for either historical or even fantastical settings.

BTW, you know what's even better than the Battle Poodle in Cruel Necessity? The card that lets you choose whether or not to cancel Christmas. Puritans, man.

My introduction to State of Siege was Levee en Masse on the Ipad. That really did not connect for me and I cringe whenever I see State of Siege now. That's not fair I know but it's just my experience. For French Revolution I am dying to try out Martin Wallace's Liberte.
Tom M

Clearly, the three card piles in Habsburg Eclipse should be called Total, Of-The and Heart.

"It is not as boring as it sounds" is a good summary for this whole review, too, which saw me learning about intricacies of Ottoman Empire history in WW1 and various actors in various movies on the subject. Which I greatly enjoyed reading and doing, so thanks!

I have (and love) Dawn of the Zeds and I've played Zulu on the Ramparts on iPad. I really am digging almost everything VPG puts out. I'll probably pick up Ottoman Sunset in the near future as well, thanks to your review.

Cruel Necessity started off as a proposed GMT release. After that fell through for whatever reason, VPG picked it up and decided to add it to its State of Siege series. That might be why it seems more fiddly or convoluted than the rest of the entries in that series. I can certainly see why it would turn off some. I guess my acceptance of the additional game mechanics that CR adds to the SoS series is enhanced by my love of the theme and all the little historical treats within the cards. As such, it may suffer from a shorter life span on my table as those things start to wear off though.

I love that while playing the game, you start to realize that the people we traditionally celebrate as one of the main founders of our country were...well...kind of dicks. Although to be fair, so was everyone else in the game. :)

I really disliked the iPad implementation of Zulus on the Ramparts, but I could tell it was probably a pretty cool tabletop game. I didn't know that about Cruel Necessity being a GMT game. That explains a lot!

Yeah, I was in the same boat, Tom. You should totally give one of the better state of siege releases a chance. Levee en Masse doesn't do it justice.

The one they do on the Russian Civil War is fun too.

Off topic from the State of Siege games, but has anyone tried Trieste from VPG yet? I've been hearing some good things about it.

edit: whoa...there's a State of Siege game based on Mound Builders now? Color me intrigued.

Corrections:
"Peter’s [sic] Weir’s Gallipoli"
"It’s designed that [way] so that you’ll usually fight to a draw"
"are put [to] the test"
"The Sinai, for instance, is [a] track"

My 2nd edition copy of this game uses the word "genocide" on card 9 "Armenian Volunteer Units" and card 15 "Armenian Massacres".

I’ve been playing the heck out of this, and it totally holds up! Which is quite the feat considering it’s nearly ten years old and it’s using the long-in-the-tooth “states of siege” engine that’s been iterated nine ways to Sunday. But I still like so much of what Darin Leviloff did with this design, and especially how he managed to leverage so much historical specificity in such a short, sleek, and snappy game. 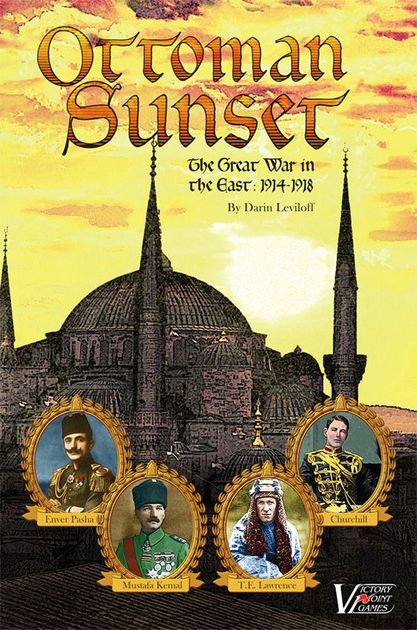 TL;DR: I use all the variants (including one from Hapsburg Eclipse!) except Persian Intervention and Resilient Capital.) After spending the past week reacquainting myself with Darin Leviloff's wonderful design -- and subsequently ordering the recent...

Talk about down in the weeds! I don’t expect anyone here to understand a word of any of that. :)

But I’ve been enjoying Ottoman Sunset so much that I decided to see what Leviloff has been up to lately, which is how I discovered he retained the rights to his designs after Victory Point shuttered. Since then, Worthington Games has reprinted one of his earlier designs! So, sure enough, I had to have this: 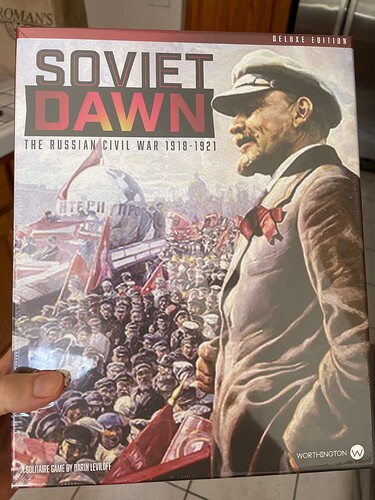 Which means I’m packing up Ottoman Sunset for now and instead of moving on to Hapsburg Eclipse – which I consider minor Leviloff, probably for lack of the necessary context and playtime to appreciate it – I’m going to crack the shrinkwrap on the dawn of the Soviet Union. Astronomical events haven’t been used in titles this well since Romero’s zombie movies!

And by the way…

The one they do on the Russian Civil War is fun too.

Please follow up on how soviet dawn is. I really enjoyed ottoman sunset. Although I’m now bummed again about the end of VPG.

Awful. :( I’m doing something I’ve almost never done: returning it to the retailer.

The rules are an absolute sham, and they seem to be for an earlier iteration of the game. The text and images don’t match the actual components. In fact, I think the cards, the rules book, and the board itself are all from separate iterations of the game. And as for the design itself, it’s a pared down and mostly personality-free iteration on states of siege. I have no idea what Worthington Games was thinking, but I really should have done my homework on this one before buying it. But at least it looks like I’m getting my money back.

Thanks for asking, @wahoo, since I was just coming here to post about it.