If I play the game with the science lady from start instead of fatty will it mess with the tutorial learning?

Is it my imagination or is the tutorial pretty borked? For instance it tells me to make a 64 sq electrical room with 2 power generators, but just 5 minutes later I’m out of power when my prison goes active.

It takes a lot of power to run the place - likely will need a couple dozen generators by midgame.

You do need to keep expanding the power supply. Like a lot of tutorials it tells you to build something minimal and fails to set expectations about what you’ll need few of and lots of. Early on for about every couple of power using items you’ll need another generator.

Should I ditch the tutorial and start over, or stick with it?

I’d say stick with it. I’m not totally sure about the latest patch balance but early on it’s forgiving with cash flow. You can turn on and off items individually to get back under power capacity. Switch off the cell and interrogation chair when not in use. You’ll need to do later on for idle research equipment as it can take lots of power.

I’m also assuming they’ve fixed the campaign bugs that killed my playthroughs. I got distracted with other games and hobbies by the time they allegedly patched things up majorly.

How do you get out of lockdown? I might be playing the tutorial wrong lol, but I went to Brazil and each scheme I did was nearby and now I’m in lockdown and I can’t seem to get my next scheme to go to move the tutorial forward.

Was I supposed to spread schemes to all of the continents instead of focusing on one?

Wait. It goes away after a while. You can reduce heat to prevent it happening in the first place.

Wait. It goes away after a while. You can reduce heat to prevent it happening in the first place.

Ahh I see that now. Thank you! BTW, how exactly do you earn gold from schemes? I have a secondary quest to make $20,000 from schemes, but it’s still at 0. I thought you just made it slowly somehow?

Also, is there an energy or or money cost to making rooms or corridors? Wondering if there’s any negative to making them as big as you need from the start.

Sorry for what must seem like super stupid questions.

No energy cost, but rooms do cost some money. The negative is you’ll run out of space.

Digging tech is useful so you can access more space.

The way to access stairs is not super intuitive but basically look up and down to find a good spot that connects two levels.

Is that even a thing in the tutorial?

Glad I got this. Having fun, though fairly clueless yet. Do the decorations for rooms do anything for you? Also, is there something that tells you exactly how many of each type of minion you need?

Also, are you supposed to send someone to each continent? Or try to maximize(?) stuff on a single continent before expanding outwards?

Gold from schemes comes in over time while they are active.

There’s a money cost for excavating and laying down each room tile. Rooms themselves don’t use energy, items in them do. Research items, for example, have a big energy cost. Which is why only having the ones in use turned on is important.

You want to manage heat in each region, and overall heat. As heat slowly rises in each region it seems limiting how many criminal networks you have active is a good idea. My first game I thought I should be expanding to the entire map asap. That turned out poorly. Also the super agent for each region only unlocks if you have networks in that region. So no, don’t put someone on each continent early on unless you need to.

I had better luck exploiting a few spots for cycling money then heat reduction missions, and temporarily creating networks in areas where missions dictated and then destroying them when no longer necessary.

Too much heat and higher level agents start showing up. If you can keep it so only low level investigators show up you can use cover operation items and traps that reduce resolve to soften them up for your minions to easily distract them if they get into the base. Once their resolve is expended they leave. Higher level agents have a lot more resolve and are more likely to start killing everyone if you try and fail to distract them. Take note on the indicator that tells you what kind of agents are coming. If you have areas of the base set to automatically distract agents consider turning them off and micromanaging when higher level investigators are coming.

When you do get traps, create areas off the cover operation that are mazes leading nowhere with traps and doors. Agents will sometimes find these areas before they find your actual base entrance and get softened up by the traps. However they won’t go down a long corridor with nothing at the end, so always end you made with a final door with a wall behind it to lure them forward.

Rooms don’t need to be contiguous walled in sections. Early all my “corridors” are actually 2 wide of corridor and 2 wide of barracks so I can line one wall with lockers. My control room has sleeping and eating quarters in the same space.

where missions dictated and then destroying them when no longer necessary.

Too much heat and higher level agents start showing up.

That’s what’s happened in my tutorial mission thing that seems to be going on and on. So the tutorial… does this become my campaign? Or do I want to restart once I think I’ve completed the tutorial (do you “complete” it?)

Does this look bad/wrong? 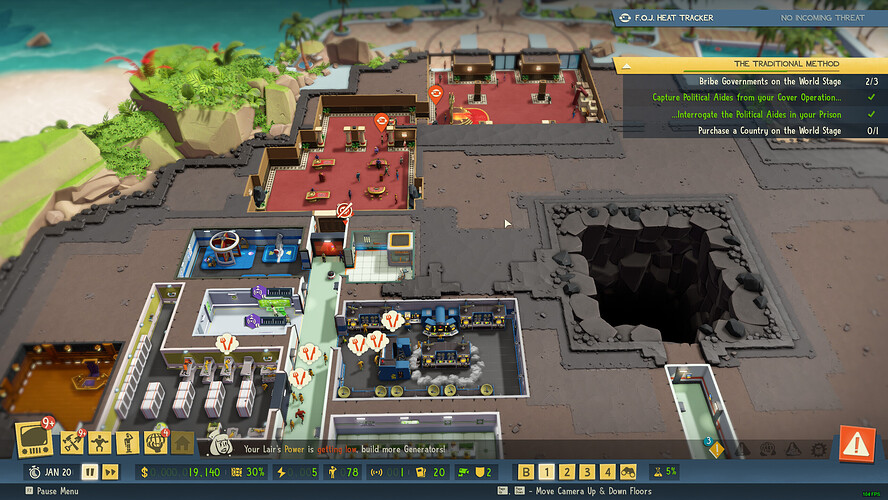 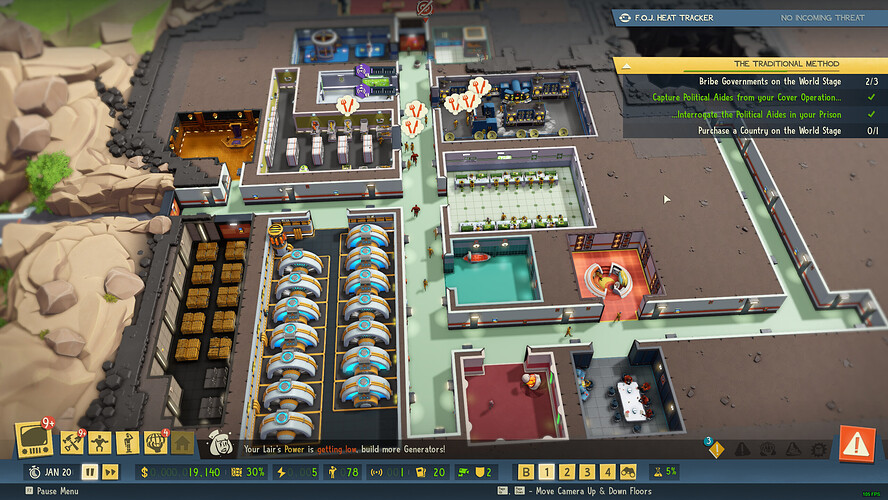 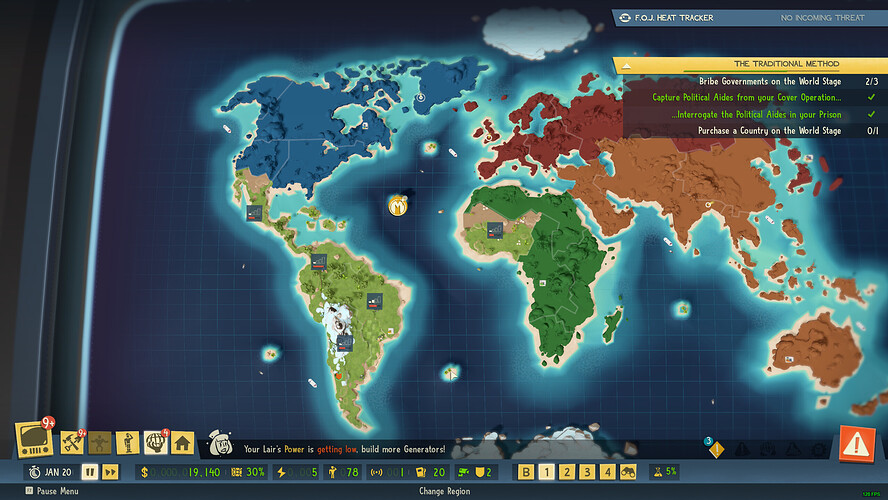 If you have areas of the base set to automatically distract agents consider turning them off and micromanaging when higher level investigators are coming.

Turning them off? You mean the gambling tables?

You get the ability to designate areas of the base where minions will try to distract, capture or kill agents found there.

The tutorial bleeds into the campaign.

I don’t think investigators level with time, just heat. However later you will be generating more heat as you have higher level networks.

Resolve is one of the attributes, like health. When resolve goes to zero they just leave. It’s the non-lethal way to get rid of agents.

OK I’m starting to understand this a lot better now. Thanks so much :)

So what’s the downside to enemies escaping? For instance I didn’t realize til too late that there were some agents in my base and 2 of the 3 made it back to their yacht.

Well… I haven’t played since release … there was a bit patch after so I don’t know if it changed… I highly suggest you don’t look till you’re done playing cuz looking for the feet under the curtain spoils things.

There was no downside to letting agents escape. That was the dirty secret.

I suspected that. Pity.

What’s the difference between bunk beds and the dedicated bed? I wish they had a civipedia or something. @wisefool 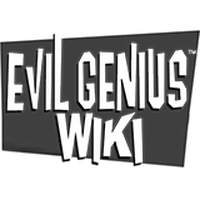 The Bunk Bed is an object that can be placed in the barracks and used by minions to recover endurance. The restore rate (RR) is 5 points every 10 seconds. It can only be used by minions during the night, and exhausted minions will favour the Mess...