A demo of the upcoming Expeditions: Rome game is out.

RPG s are usually of little interest to me but I will give the demo a try. 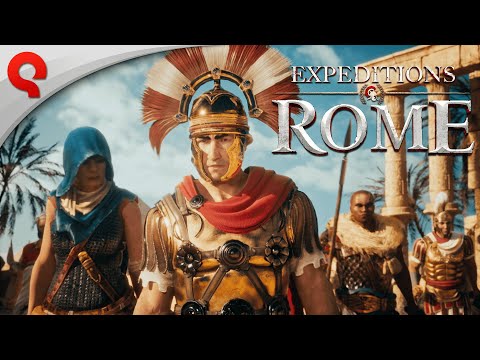 I liked the first game more than the Viking version, but I still have hope here.

Same here. I very much liked the first game (despite the bugs), bounced of the second one and, being a Roman period archaeologist, have high hopes for this third version. However, based on the second, I’m glad there’s a demo!

I didn’t even know there had been a second game :0

Thanks, this looks interesting! I’ll try out the demo. I bounced off of Conquistadors.

Am I misremembering in thinking the developers were working with BioWare (or a similarly-sized company) on some Dragon Age (or an analogous series if not BioWare) adjacent project? Is that still a thing, assuming it ever was?

As I recall, asking a question about Vikings was what got me to join this forum after lurking for a bit. I hope they’ve finally moved on from having a tedious, overly-long introductory part that makes starting a second playthrough feel like more work than it’s worth. I’m a little saddened that they’ve continued their trajectory of moving away from unique settings (Mesoamerica) that emphasized exploration and toward less interesting, well-trodden settings where role playing an explorer seems to be an afterthought. Conquistador came as close to being a modern day Seven Cities of Gold as anything I had played to that point and while Vikings was in many respects a better game, it didn’t quite have the same magic for me, perhaps because it leaned much more into the RP part of SRPG when I was hoping/expecting for more of an emphasis on the S.

Regardless, I’m definitely buying this.

Edit: After watching the video, I’m excited by the prospect of having command over large-scale battles, intrigued by the claim of choices and consequences (though nearly every game says that ‘your choices actually matter’), but concerned about it being twice the size of Vikings as QA is not a strength for them.

It’s hard for me to take any game (or any media) about Romans seriously after careful and repeated readings of acoup.blog

I just found out the Romans didn’t exist so yeah, I definitely can’t take them seriously.

On my wishlist, but the demo is 23Gb (!) so I’ll have to download it overnight.

Is Conquistadors good? That’s exactly why I’ve been interested in it, but I’ve never picked it up. The opening bits of Rome look good. How comparable is Conquistadors? What about Vikings?

Is Conquistadors good? That’s exactly why I’ve been interested in it, but I’ve never picked it up. The opening bits of Rome look good. How comparable is Conquistadors? What about Vikings?

I quite liked Conquistadors, although it was somewhat buggy on my laptop. Especially the conversations were, as far as I remember, fun, as well as balancing the good and bad character perks of the party. I think I started to dislike the worldmap-travel a bit after a while…
As for Vikings: I bought that a few months back and played a bit of it, but bounced off, mainly because of the high difficulty (or my lack of skill, of course). Can’t advise you on that one I’m afraid!
Finally: Rome. Based on the demo, I quite like it so far! Skilltree is improved and, IMO, quite interesting. I very much like the restoring of action points after killing low-lvl enemies: makes for a more interesting and more strategical battle. Not too impressed by the dialogues so far: they are historically accurate, but haven’t (so far) made me bond with the characters (which I did in Conquistadors, if I remember correctly). Also: one plot twist is glaringly obvious (or at least: I think so, I haven’t reached the reveal yet :-) ).

All in all, Conquistadors is definitely worth a try IMO, and if the next stage of the demo is as much fun as the first, I will definitely get the full version of Rome aswell!

Yes, perhaps even great. It’s similar to Seven Cities, or rather my hazy memories of Seven Cities, except it exclusively takes place on land and Conquistador has a main story to follow and a clear ending, but is fairly open world aside from that (oh, and aside from the opening/tutorial section which overstays its welcome by several hours). You have a party of ten or so companions chosen at the start from a list with varying personalities and attributes which sometimes conflict with each other or with your PC via a conversation system that’s the best thing about the game. Or would be if the combat was not nearly everything I want from a game like this: Hexes! Attacks of opportunity! Various weapons that seem reasonably well-balanced and good for different tasks! You also have a fairly large map to explore with resource management and random events to navigate/weather the best you can.

I recommend it over Vikings especially if you are looking for a modern take on Seven Cities, with the caveat that Conquistador is in a different genre and of a different time. Vikings is good too—more polished, certainly—but did not quite do ‘it’ for me for reasons mentioned above. I haven’t tried Rome yet, but am downloading the demo as I post this. The developers are pretty competent at the actual game design parts, so I can’t imagine Rome would be a bad game. Janky maybe, but not fundamentally bad.

I enjoyed both of their previous Expeditions games well enough that I’ve completed both.

Conquistador was an “exotic” setting - as people have mentioned seemingly more focused on exploration, but it’s worth noting that this isn’t really true - this is not a procedural open world - you have a land to explore which will look identical each time, with a fairly standard rags to riches storyline to complete. There’s a rather poor resource management mini-game (which you’ll curse every minute during the early gameplay, when lack of skills and the RNG will make this very frustrating and care very little about in the late game when you’ve established your squad), a bunch of RPG conversations which will lead the storyline (and your party) in different directions, and a pretty competent tactical combat game. I tend to tire a little of the combat by the end of the game(s), but it is fundamentally sound.

Vikings. The world is now divided into zones for each location, which is not really an improvement (feels more Baldur’s Gate and less open-world), but the resource management is much less frustrating and there is now a more significant base-building aspect to the game (which the first also had, but in a very limited manner). The conversation system is much the same as it was before (your choices impact on what your party thinks of you and what they think of you affects how well they fight). IMO a lot of the choices/actions are more meaningful (more opportunities to gain or lose followers, for instance), And the combat system is just plain better - the core is the same, but there are more ways to customize and build your characters. Personally, I consider it a superior sequel to the original game a IMO the exploration element in the original game is largely superficial.

Excited to see how they have adapted this to Rome. While there are some janky parts in both of the previous games, they’ve both been pretty solid gaming experiences IMO both in terms of narrative and mechanics.

Edit: And yes - the combat in these games is brutal. But that’s part of the fun - it is absolutely possible to master. In addition, you don’t actually need to win every combat - you can lose combats and still complete the game.

Conquistador is in a different genre

Not a positive for me, generally, at least if it involves choosing where to put things and such. If it’s just upgrading facilities, that’s fine.

We’re talking about a game I played 30 years ago, but I don’t remember Seven Cities being so much a squad-based, tactical roleplaying game. Conquistador is sort of XCOM in Mesoamerica, except you’re roaming freely across an open-world(ish) map instead of embarking on missions from a base.

Oh, sorry, I thought you meant Conquistador vs Vikings

Yeah, that makes more sense. Conquistador and Vikings are the same genre, except that the latter leans more heavilty into its RPG aspects and often feels like Bioware with hexes.

Not a positive for me, generally, at least if it involves choosing where to put things and such. If it’s just upgrading facilities, that’s fine.

As I recall, it is all just about chosing which facilities to build and then chosing how/whether to upgrade them. I did dislike the “wander around and plunder chest” elements that you’re kind of forced into in the early game which this partially necessiates, but overall it’s not an onerous addition to the game system and since developing the base is integrated into the game’s ending mechanics (you win by building up fame, wealth or both), I think it works pretty well.

“wander around and plunder chest” elements

Lol, now that generally is my thing.

the latter leans more heavilty into its RPG aspects

Hmmm…maybe I should give Vikings a try.

I didn’t know these games existed until a couple of weeks ago. Tried about 20 minutes of the demo just for a quick taste and me likey.