I know what an NFT is but what is an NFT game and why would I want to play one? If the game play isn’t there, I’m certainly not going to care about any game related NFT’s, whatever those are.

I assume the idea is that the player will ‘own’ an NFT which they then use as a unique avatar/character in the game.

Aaaaaah crap. Well, I guess they’re following the opportunity to make money (NFTs being the novelty, there’s money to be had in that “field”), but that doesn’t make me very confident that the game will have proper post-launch support, which makes me less inclined to buy the game and/or support them.

It’s sad, really. Understandable, at a certain level - making a living making games isn’t exactly easy, and it’s hard to pass a chance to make some big bucks even if it’s with something as terrible as NFTs - but sad. Sigh.

but that doesn’t make me very confident that the game will have proper post-launch support, which makes me less inclined to buy the game and/or support them.

Thats my thought as well - I was about to purchase it today, but I think I’ll wait…

Yup, I just fact checked it, and in ancient Rome they spoke English but pronounced consonants weird. Historically accurate! Can’t wait to find out if it’s visually stunning and fun as well.

You jest, but this is a recurring conundrum when using ancient languages in modern media - how to pronounce and present it to the viewers.

I recall in one of the early seasons of Vikings, when the Vikings arrive on an English beach, and they have the actors speaking 2 different languages, both subtitled in English, to represent the lack of understanding.

I thought it was very well done, can’t vouch for the accuracy though obviously.

Less well done imho was a scene from Spartacus with the Germanic gladiators all speaking what to my ear was pretty normal German lol.

And there is the ongoing challenge of reconstructing pronunciation. Afaik the main technique scholars use is to analyse known linguistic drift (i.e. that which can be proven) such as the divergence in English and German over pronouncing Apple/Apfel. Apparently they were the same word once, but in Britain we ended up emphasising the P and in Germany it softened to a pf sound.

And then extrapolate that backwards to reconstruct an ancient language.

Now I see a big problem there with something like Latin, in that the descendant languages, although clearly related, often have very different pronunciations, so which thread to follow backwards? Italians don’t sound anything like Portuguese!

So, kudos to a studio for even hazarding a guess at latin pronunciations.

One of the few shows I’ve seen, that has actually tried using real latin, was Barbarians, a german show about Romes foray into Germania.

A great example is here 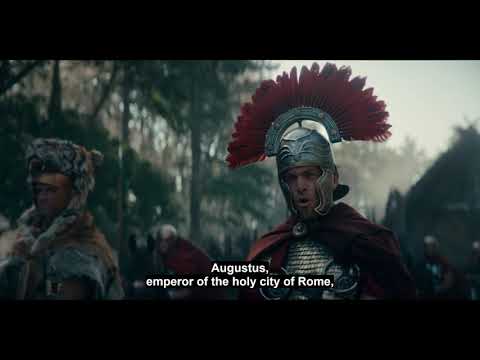 In classical Latin we have a large enough body of work remaining to be able to use direct sources as well to derive how it was pronounced. For example, common misspellings indicate a similarity of sound between the swapped letters.

But did they or did they not all have British accents?

But did they or did they not all have British accents?

Been curious about this show. I know it wont be as amazing as Rome, but I am craving something like it.

I enjoyed it well enough and it’s not a huge time investment to get through the one existing season.

So, the Expedition Rome PC game; I’m having pretty mixed feelings. The historical side of it is pretty strong but as a game, I’m honestly not sure. I just finished one of the first chunks of main Quest “Trial by Fire” including a big ambush battle, and I managed to get Julius Caesar killed. I guess I have rewritten history. Also, I don’t know how that happened - I was told to save as much of the legion as I could and I thought I did a good job but a huge chunk of that battle was automated and out of my control. From a gamers’ perspective that sucked pretty hard.

It’s not really a true member of the CRPG glade as typically defined but has other stuff stuck into it in a not-always-smooth way.

Also in addition to losing Caesar, I seem to have had a side quest removed from my list with no explanation (it involved Caesar). I get that it may have to do with the death of Caesar, but I would like an explanation.

Also, I can’t get over getting him killed without knowing what was up. He was not a controllable character and I didn’t notice if he got killed onscreen or not.

I think my biggest beef is the game’s lack of communication to the player. Feedback to the player seems VERY unpolished and incomplete, which is sad given how much polish and depth other aspects (like the historical background) have.

In theory I should be enjoying this but I’m very ambivalent right now.

Speculation from my time with the demo:

I think the idea is that your PC becomes Julius (not literally, but filling the same role he did historically), and his death is scripted. I also didn’t notice he died until I was informed after the fact and given his dagger, which I attribute to the awful looking character models and being unable to discern who was who during the battle.

Which is VERY weird for a product that is hard into historical verisimitude in other ways.

It was certainly jarring (the point, I suppose). I think becoming rivals of his would have made more sense, with him being a recurring antagonist.

So if the fate of Caesar is written into the script, the game just did a completely SHIT job of conveying that whole sequence to me. It’s a pretty huge problem with game feedback to the player IMO.

I was thinking of firing up the game just now but my finger wouldn’t click the button. I have no trust in the game giving me important information now and that’s pretty deadly to enjoyment.

It wouldn’t have been hard to explain what was going on but they just chose… not to. Weird. And perhaps deadly to my continued play.

So I decided to try to play on but the next fight I got into, the actual storming of Mytilene, is annoying. I have to kill 8 of 13 dudes to force the opponents to surrender but as I’m peeling the onion to do that, reinforcements keep flooding in?

I really don’t like the way game limits choice in tactical battles; they want me to play a certain way, which is not my style. The game seems to not be conducive to careful tactical play - this is like the third battle I’ve been in which the game seems to force a balls out aggressive approach, which is not the way I want to play. Also, all the reinforcements are annoying.

Also the idea of a Legatus leading a personal squad into directly storming the gates of a fortified city to engage the enemy leader - that’s not very Roman.

I’m beginning to feel like the fusion of RPG and history is just not working here. Sigh.

I enjoyed it well enough and it’s not a huge time investment to get through the one existing season.

It’s pretty good except for the final battle, where they just threw history out the window.

Yeah, I’m done. I should have heeded my negative views of Expedition: Vikings, in which the forced elements of play ruined the game for me early on (Expeditions: Conquistador was less ridiculously forced and better for it.) None of the reviews gave me an honest preview of the realities of combat in the game, which is IMO neither tactical squad based combat in the traditional sense (all about careful tactics) nor turn based RPG combat in the typical CRPG sense (all about the power curve). I’m not really sure what they were going for with the tactical combat; some kind of faux tension with waves of reinforcement and constant pressure to FIGHT FAST DAMNIT!!!???

I wish I had figured this out in 2 hours instead of 4 so I could get a refund. But I’m at 4.1 hours b/c I really like both historical stuff and turn based combat and I wanted to give it a solid try.

The idea of stepping into a campaign alongside historical figures like Julius Caesar and Lucullus (one of the more underrated of Rome’s great generals IMO) and also the setting during the Mithridatic campaigns (a very interesting time in Roman history) were very attractive to me but ultimately the hodgepodge of weird RPG, “simulation” and tactical elements doesn’t work for me. This was also true of Vikings but not, oddly, of Conquistador.

I’m pretty disappointed b/c this was highly anticipated by me and the initial impressions of reviewers and of demo-players was quite good. But ultimately this game was not good IMO.

I wish I had figured this out in 2 hours instead of 4 so I could get a refund. But I’m at 4.1 hours b/c I really like both historical stuff and turn based combat and I wanted to give it a solid try.

Not to rub it in, but all the things you dislike (and I can see why you dislike them) were in the free demo?