Fallout 76 is fantastic. Unfortunately I’ve completed every quest in the game (level 150). They really need to add some new content. Hopefully they’re working on an expansion. 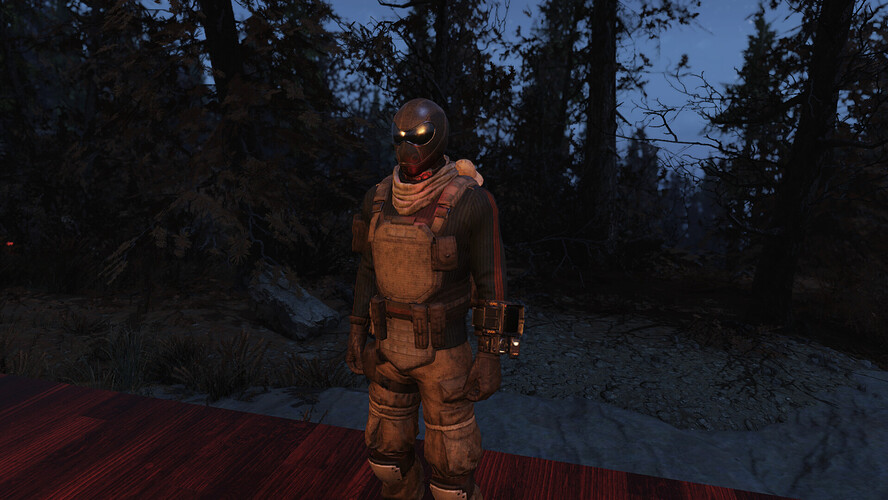 Read within to get a look at what’s to come in Fallout 76 with the 2021 Roadmap! Also inside, an upcoming developer AMA. 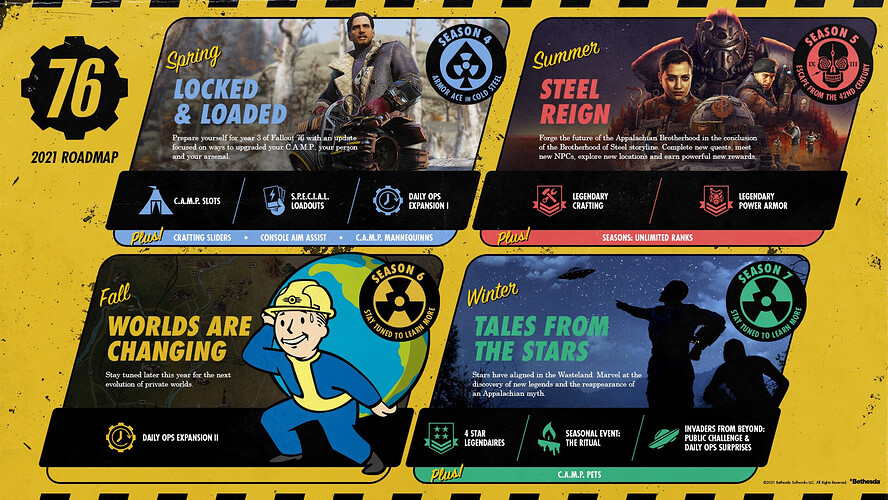 I really did try and like this game, Add me on steam… you can see I played 2000 hours of Fallout 4. Bless my heart,

But this game sucks. Good god, it never made any sense and its some weird combination of an mmo and some kinda – -heck i played it for 100 hours, It’s just terrible.

Did you play it after the Wastelanders patch that added NPCs? Because it’s pretty good after that. It’s a reasonable Fallout 4.5.

You can take lessons from other games without cloning those games or losing your own project’s identity. Really does seem like some poor management and direction from the top.

It’s important to know what people did both right and wrong, because it can save you driving into a ditch someone else has already been in. It always really surprises me, that level of ignorance about what else has been done. Even if you are not doing it to avoid the problems that have already been solved, good artists borrow, great artists steal. Blizzard used to be the king of that philosophy.

Not knowing, or wanting to know, what has and hasn’t been done, is a horrible combination of hubris and stupidity…which is actually my beef with Todd Howard in general come to think of it.

There’s just not ignorance of what has been done before, but a real ignorance/misunderstanding of their fan base. Turns out that Fallout fans don’t really care all that much about MP or PvP, but instead wanted a game with interesting NPC’s and quests - they just wanted another Fallout. MP was a nice addition but without a real “living” world, it wasn’t all that interesting or compelling. They totally missed a key aspect of what made Fallout interesting and fun for players.

Yes, that’s exactly what everybody said before release too. Sometimes the unwashed masses get it right.

its a great idea - Its just the implementation that has been lacking. ESO is working quite well, and is one of the best MMO’s out there currently - easily in the top 5, probabably also in Top 3, playerbase wise.

its a great idea - Its just the implementation that has been lacking. ESO is working quite well, and is one of the best MMO’s out there currently - easily in the top 5, probabably also in Top 3, playerbase wise.

I agree ESO is a good MMO. Haven’t played in a while, but for the genre it’s very well executed. I am not quite as sure I’d liken it to a co-op Skyrim, though. To me it feels very MMO-ish, and not very Skyrim-ish. Too many MMO conventions and limits for my taste. Single player only games have a lot more leeway for player bad-assery.

Yep, I’m one of those people. Honestly, I wish that’s what we got in either ESO (it’s a MMO set in the same world) or FO76 (closer, but I don’t want an online game with randoms running around). I really still just want to be able to play Skyrim with a friend. Not a MMO, not an online survival-ish game, just a Skyrim or Fallout 4 that a friend can join and we can explore together.

“People playing Skyrim” is pretty vague. Exactly how many and what percent of the player base though? Was it a significant number or was it nothing more than a vocal minority? I think that Fallout 76 shows us which is true, which is exactly why Bethesda had to recalibrate the game.

I’d also add that when you say that people wanted a co-op Skyrim that is the full Skyrim experience - a story, NPCs to interact with, quests to complete for them. They stripped out most of that in Fallout 76 and gave us a co-op experience but not the full Fallout experience. So even the people wanting co-op got less than what I suspect they wanted. They wanted the original experience plus co-op, not a lesser experience + co-op.

Oh I agree with all you said - Its just “on the internet” people wanted it. No metrics from me, but its been a recurrent theme for many years.
I also agree that what people got was less than ideal, but probably no surprise to anyone that ESO is what we ended up with.
Fallout 76 is a good idea as I said, its just a really poor implementation. The private worlds, and the new NPC’s are a step closer, but still not quite there.

I just wanted to chime in on Elder Scrolls Online vs. Fallout 76. One of the things ESO got right (IMO) that F76 doesn’t was theft, which was a lot of fun in most Elder Scrolls and Fallout games.

I was very impressed that even in a MMO you could steal stuff and there would be some varying consequences. It was actually even more fun in ESO than the other games cause there was no saving/reloading and the tension I always had while I made my way back to the thieves guild fence with a kill on sight bounty on my head but an inventory full of stolen goods.

I don’t know if they’ve updated things in F76 since the first implementation of the Wastelanders DLC but “theft” was basically non-existent.

ESO didn’t launch with thievery either, it was added in the Thieves Guild DLC about 2 years after release. So maybe there’s hope for FO76 yet. :) Well, now that there’s apparently NPCs to steal from… 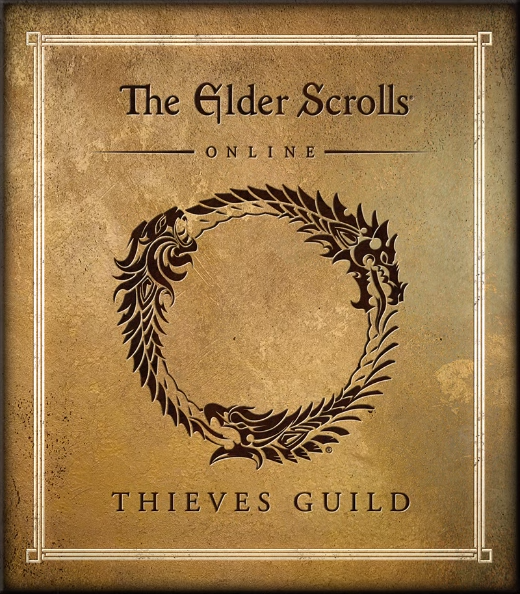 I just wanted to chime in on Elder Scrolls Online vs. Fallout 76. One of the things ESO got right (IMO) that F76 doesn’t was theft, which was a lot of fun in most Elder Scrolls and Fallout games.

Yeah, there are a lot of cool things in ESO, for sure. If I was to get back into MMOs at all, it’d be that one probably.

If you are considering ESO, there’s a double-XP festival starting tomorrow. It lasts for a week, followed shortly thereafter by the Anniversary event. Heaps of free stuff.

ESO has made great, great strides in PvE. I’m amazed at the amount of content they have. PvP still has issues, but that won’t matter to most people.

FO76 remains uninstalled. I’ll check it out in another year or so, if they keep making progress.

I do hope they can turn F76 into a viable multiplayer game. I for one never thought I was looking for a “multiplayer Skyrim” until I played ESO.

I say that a bit tongue in cheek because it’s not simply multiplayer Skyrim but a sophisticated implementation of classic Elder Scrolls gameplay in a MMO format (and by classic, for me, its Morrowind and later since I didn’t play the real early ones like Daggerfall). So you have to like MMOs in the first place, or at least tolerate them, in order to even find it fun.

As @KevinC pointed out, ESO didn’t start out fully featured but at least it always had NPCs. Also, I didn’t start with ESO until about 6 months or so before the Morrowind expansion launched, so maybe if I had started F76 with the Wastelander update I wouldn’t have quite the sour taste in mouth.

I’m still not sure where they are going with though in regards to F76. ESO is quite clearly in the MMO genre. Anyone able to take a stab at where F76 is and/or aiming for in relation to other games/genres? Is it literally just supposed to be Fallout with friends? That could explain so many of its problems.

I’m still not sure where they are going with though in regards to F76.

Breaking apart the Fallout 4 gameplay model and monetizing every bit of as a SAAS.

Definitely feeling one of those laugh/cry emojis right now

I don’t think the developers really know where they’re going with it which is one of its problems.