It’s getting fixed next weekend according to devs.

They have to. MBTL loads so fast that it really exacerbates the problems with loading time in Strive.

The fix came in today

Halves the startup, so now around 1 minute for me

The totsugeki mod still works on top of this, reduces it to 30 seconds
Unga-Bunga variation of it cuts it to 15 seconds

In more news: the next game to get rollback is my favorite of the oldschool 2D games, KOF98 Ultimate Match.

It will be $7.50 next Tuesday, when a beta starts for the online.

Not only the fix, but a major patch dropped for Strive. Lots of changes in that one, some much needed buffs and some head-scratching nerfs, but it seems most people find the changes to be positive.

I might play a bit this weekend. We’ll see.

I gotta say the price of Nickelodeon All-Star Brawl is making absolutely sure that I don’t purchase the game. If it was $20 or $30 i might get it, but honestly it hasn’t got reviewed that great, I’d play it for the novelty though. But $50 is just ridiculous

I think most of the appeal of Nickelodeon is as a response to complaints about competitive Smash – they’ve made a big deal about the netcode, wavedashing, etc. But watching it, it just looks so cheap in comparison. Like, hits seem to register weird, there’s all kinds of unbalanced combos… it just doesn’t look like it’s aiming much higher than “Smash knockoff”.

Maybe it is super deep with a high skill ceiling, but… I’d just rather play Smash.

But watching it, it just looks so cheap in comparison.

I read a thing that noted that there’s no voice in the game, just generic placeholder-y fighting biffs and pows. I guess probably they couldn’t afford the original voice talent and maybe didn’t want to or weren’t allowed to use soundalikes? Even the sound effects that are there lack impact. It definitely contributes to the cheap feeling.

I think PC has modded the voices in already, but the game isn’t well-regarded,

News of this way:

KOF98UM has a really good lobby system now in its beta, which might be better than what anyone else has done in terms of function. All-play, spectator, and quick rematch options. Very nice.

Characters are being revealed for a new fighter called Dungeon Fighter Duel based off a Korean MMO. The designs look pretty good. Will have rollback.

I think this is the one that’s Arc Sys, and basically looks like Guilty Gear with serial numbers filed off? Not that there’s anything wrong with that.

It is, but the designs so far are less overdesigned than Arcsys games.

King of Fighters 15 released today. My first impression of the PC port is pretty positive, though I’ve heard non-standard controllers have issues, and there’s a bit of options wonkiness, but nothing major.

The game seems to be very well received, lots of cool characters and lots of good options, but a lot of grime.

Evo 2022 was one of the best Evos. I watched the Evo finals for SFV because my brother wanted to, but otherwise I didn’t really care for the game.

Then Idom’s fairy tale run through loser’s bracket happened. A pad player who cut his teeth on online play takes it all the way from losers to a grand finals reset with a non-meta character. It’s like he’s playing a different game than everyone else.

Idom’s ability to read his opponent and take the advantage borders on preternatural. He mains Laura, and you’d be fooled into thinking she is basically a broken character the way he plays her. When he gets his V-Trigger he sets up these insane pushes across the screen where Laura’s slow electric projectile pressures the opponent to defend while Idom tries to find the angle to get a grapple. It seems so overwhelming that when an opponent manages to slip through Idom’s advancing offense it seems amazing. His streak against Kawano that takes him to the reset is phenomenal - Kawano’s ability to adapt and find a way to run the clock out on Idom got him a well-deserved win in the end. But Idom is going to get an Evo win sooner rather than later, I’d wager. He’s already put together quite the name for himself between taking it to the finals against Kawano and a more symbolic victory against Daigo earlier in the bracket.

Beyond that the Tekken finals were also very memorable. More for the operatic drama of it all. Everyone was whispering that Arslan Ash, a young upstart Pakistani, would make waves against the established top players like Knee and JDCR. Ash gets knocked into losers in the top 48, and surprisingly his training partner, another Pakistani named Khan, keeps amassing wins making it to Top 8 winners. Ash claws his way through losers and Khan suffers a fairly decisive defeat in the winner’s final against Knee. This places them against one another. To get a chance at the grand finals, Ash has to defeat his partner he came to Evo with - but Khan takes the victory, only to be placed up against Knee again, who he just was dominated by a match before, to compete in the grand finals. Khan switches to a much more aggressive and technical playstyle, and manages to rise to the occassion, barely scoring a reset. While Knee eventually gets the win in the reset finals, Khan went from basically a sidenote in Ash’s story to an indepedent figure in the FGC with this tournament. I’m a huge fan of his now as well. He’d be the big story of this Evo if it weren’t for Idom.

Of course it’s also worth noting the crowd energy at an in-person Evo was incredible. It’ll make a fighting game fan out of anyone. 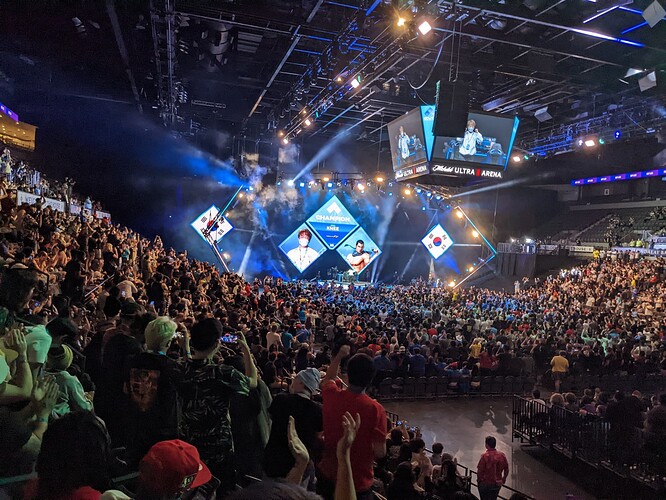 I was watching from home and I agree 100% that SFV was just stellar. What a way for a game to go out on the big stage. That was awesome to see.

Tekken was good too, but while the gameplay in KOF XV was exciting, it was pretty clear who was the best player there. Guilty Gear: Strive just goes on tooooo long. It reminds me a little of Dragon Ball FighterZzzzzzz that way.

Bridget’s story changes have been well, controversial, but very well received in most respectable quarters.

A friend of mine who works at a trans clinic and is involved heavily in the anime-FGC said she now has to teach some kids how to play Strive. It’s amazing how much faster she picks characters up, even if I can usually compete when we play mains. She’s a damn good teacher and incredibly nice.

I wish I liked KOFXV, they do a lot right, but the gameplay is super stale to me, not having changed much in 20 years. New Garou interests me, and Samsho getting rollback meant I bought it and will sit on it 9 months (I doubt it hits a better sale price)

Arcsys gets props for Bridget and DBFZ rollback. Cygames and Namco get the sideeye for ignoring rollback.

A generl consensus among my 3D fighter friends is we’re dreading Namco next gen- we have low confidence in Tekken 8 and Soul Calibur 7 (if that even happens), and VF we have no idea if we’ll get a decent product or even any product (we believe Evo 2024 there will be something).

iDom was already the Capcom Cup champion back in 2019 before the pandemic, so he’s no stranger to big results.

What’s a good fighting game to try to get into semi-seriously right now? Guilty Gear? Street Fighter? One of the Dragon Balls?

However, then I watched a “beginner” video about “basic” gameplay that was chaining together multiple linked chains of button presses and directional movement in super regimented ways. At some point while watching it, I was reminded of why I dont play those games anymore. What is going on on the screen looks fun and cool, but the input, muscle memory, and split second timing practice required to do it really clashes with my old man (body, reflexes, time obligations) reality. Still, I keep thinking about trying it out even if the modern genre is totally at odds with youthful nostalgia.

Guilty Gear Strive is pretty approachable in my opinion. But not a lot of single player content there. For that I’d go with something like Injustice 2 or SoulCalibur VI.

Guilty Gear? Street Fighter? One of the Dragon Balls?

Strive has a solid playerbase, good netcode, and is moderate difficulty.

Calibur has low playerbase , mediocre netcode, but is low difficulty. I enjoy it more but I’d recommend SFV or Strive.

I’m 45 and I can still complete online some, even if not at the levels I once could.

DBFZ will explode in popularity when it gets rollback, but it will be online warriors coming back, which could make it hard.