Sure, why not? They added RT reflections and shadows to FC6, just in a particularly poor implementation. Watch Dogs Legion supported everything too and looked great, as it was sponsored by Nvidia and not AMD.

It sounds like we’ll get Far Cry Online instead. Remember we might be coming to the end of this phase of Ubisoft open world development as they switch their focus to something more driven by engagement and stuff.

As much as I loathe the idea of going from single-player focused open world games to online service-style games, I can understand the lure for publishers. It costs a ton of money to develop something like FC 6 (I sat through the entire list of credits, accelerated of course, and it still took like ten or fifteen minutes!) and they sell it once for $60, or get people to pony up a month or two of their Ubi service for $15-30, and that’s pretty much it. I doubt the paid DLC for these things is bringing in big bucks, but even counting that in I’m guessing the calculations don’t look grand from the perspective of the accountants. On the other hand, take the same game, chop it up into say five parts, and sell each part for $30 as “world expansions” or whatever, while simultaneously getting more traction with people to sell cosmetic things because now you have an audience to see your platinum-coated pickup truck or whatever. I’m guessing that’s what they are hoping for.

An open question for me is whether Ubisoft will be able to exploit the new generation hardware at all.

7 years later they still have yet to release a game that looks better.

I get the thought process when a company looks at other companies raking in the cash from online games, but I wonder how many people out there are like me: I loved, loved, loved RDR2, but it only took a short time in RDO for me to remember why I don’t like online games. Tons of kids who live to be jackasses and griefers. No more RDO for me. I loved Division 2 and played the heck out of it, both single player and coop with my brother, but once I tried the PvP parts I quickly said no thanks.

I wouldn’t be interested in an online multiplayer game. But I realize I may be in the minority. I will just say they don’t have a lot of competition in single player open world games, even less with coop play thrown in.

Question because I’ve never tried it, but do the FC games give you the option of using the audio with a different language than the one the OS uses, like the AC games do? Because if that’s the case, I’m going to try that when I buy this on sale whenever. Of course, I hope it gives an option for at least “Latin American Spanish” (too much to hope they’d have Cuban or even Caribbean Spanish) vs. Peninsular because the latter would sound comical in the context. 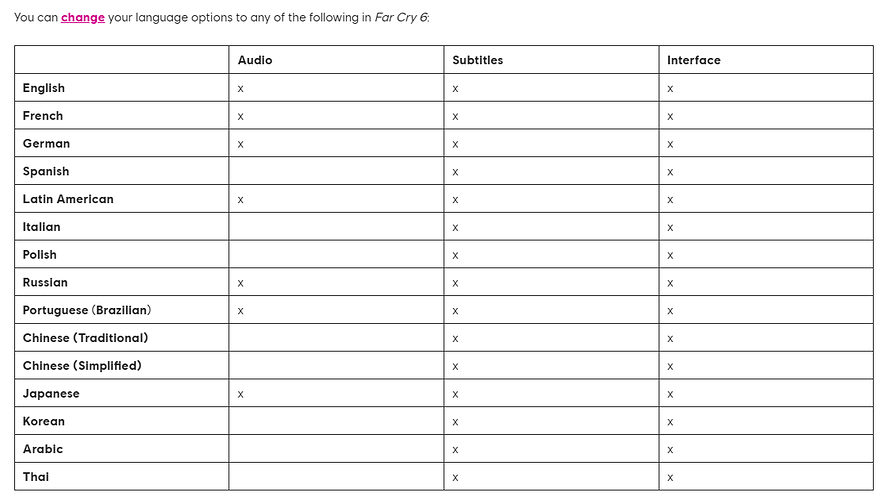 Thanks! I should switch spoken language to French, German, or Japanese for a really jarring experience, heh. But it’s cool that I can play it in Spanish, although I was watching one stream played in Spanish on Twitch (by a Spanish streamer) where it was clear that someone along the chain had translated an idiom from English literally (I wish I could remember now what it was, but oh well).

True, though they’ve done bigger if not necessarily better. And we know they’ll be able to bump up polygon counts, textures and draw distances without any effort. I’m wondering how the extra CPU cycles will be used, along with better storage.

I started playing AC Unity recently and the crowd sizes are amazing, as are the interiors of places like the Nôtre Dame Cathedral.