So I guess the rumored “action” Final Fantasy game being done by the Nioh studio (Team Ninja) has been shown, and it’s not actually called Final Fantasy Origin (well, maybe not - after all, that title is part of the reveal trailer) but is instead Stranger in Paradise, featuring some pretty cringe dialog and some God Of War gameplay. I don’t know how I feel about it. It looks like a 66 on MetaCritic to me.

Somebody posted this on the discord. Found it hilarious. 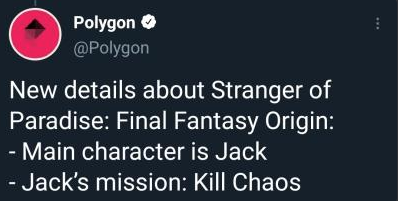 The trailer even has a “twist” that you can see coming miles away. Yay, I guess? ;)

Still, it’s Team Ninja, so I’m somewhat intrigued. I want to see more. And I’d like to kill Chaos.

Oh man, I just remembered I never finished the trailer. That’s not a good sign.

The trailer didn’t do a whole lot for me, but that’s typical with any trailer that’s mostly focused on setting up the story and characters. I’m going to remain hopeful because “Nioh combat/exploration with classic Final Fantasy bestiary/music” sounds like a winning recipe. 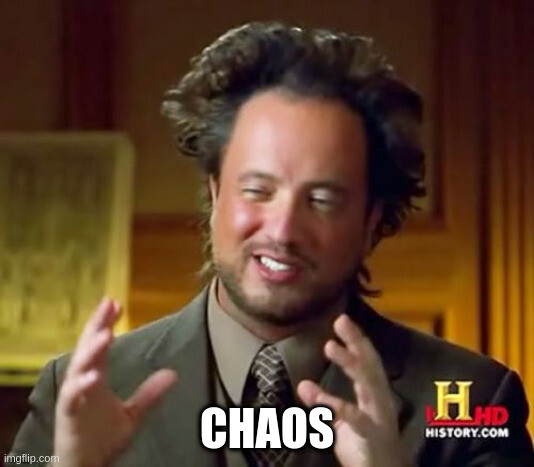 If anyone was looking to play the demo on PS5 the download has finally been fixed.

Well, after playing the demo, I’ve gone from cautious optimism to eager anticipation. Still not feeling the characters, and the performance is clearly unoptimized at this point, but the combat is really fun, with some ideas I hadn’t seen before.

Yeah, there’s a ton of cool and interesting stuff in the demo. Swapping between jobs on the fly is really cool and there’s tons of interesting customization. It’s also way more challenging than the trailer implied. Easy to get overwhelmed, and the boss fight is really hard.

It’s also way more challenging than the trailer implied. Easy to get overwhelmed, and the boss fight is really hard.

Yeah, I initially played on hard, died a number of times in the mission, and couldn’t beat the boss after quite a few tries. Even after I switched back to normal, it still took a good number of attempts to get past it.

The dude plays his own exit music after saying “bullshit.”

It’s amazing. and I especially love the Jrpg cast watching him like dogs at the front door during the whole process! Just love it.

2nd demo is out. Mechanically it plays alright but the writing/characters are well, you’ve seen the clips, and the graphics remain some of the most last gen looking stuff, like not even good last gen. I think this is using the Nioh engine but I also feel like Nioh 2 looked better than this. 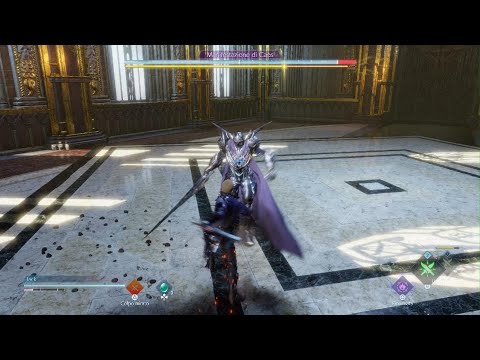 Looks like Nioh plus Tales of Arise. Could be fun.