I have no reason to believe Square will deviate from their pattern of releasing an identical PC version a few months later for inscrutable Japanese reasons.

Those are different, too. When I play a Far Cry or an Assassin’s Creed (other than the inane framing story nobody cares about), I get the whole story. Not so here. This is an episodic game, not a franchise release.

I’m pretty sure the reason is still the boogieman of piracy. We can’t give it to the evil PC gamers at the same time or they’ll make pirated copies that will take away console sales. That a few people also double dip doesn’t exactly discourage them.

I was always assuming it would come to PC since, as noted, most Square Enix games do eventually. However, though I do not have a source on hand, I do recall reading that it is set to be a one-year PS4 exclusive. I do not know if that is limited to being console-exclusive opening the possibility of a PC release prior to the end of the one-year window or not.

I found this review interesting.

A remake is, by nature, an egotistical exercise. Choosing to revise and re-release an old work of art is looking back at it and saying, “You know what? I could do this better.”

I have to say I’m intrigued. On the one hand, bloat is one of my biggest game design pet peeves.

Ugh. I’m not sure any exchange was brilliant enough to be stretched like that.

On the other, Midgar is the best part of the game. It only makes sense to expand upon it. A 40-hour game that’s just Midgar sounds good to me. Then again, I can imagine this is going to be some first part of a 120-hours trilogy… :-/

FF7 is unlikely to be improved by its writers being impressed with themselves.

Barrett’s dialogue in the demo was exactly the kind of “Japanese writers doing edgy American character” nonsense I can’t stand. Plus the cussing was just unnecessary and means I don’t want to play the game with my kids around.

I suppose I could play it with JP voices and subtitles, heh.

e: crap, the 6yo is a good and fast enough reader that won’t work either.

Final Fantasy VII Remake ’s ending…It’s still not clear just what the developers at Square Enix plan to do next, but the ending makes it very clear that the project’s director, Tetsuya Nomura, has spent the past two decades as the chief creative behind Kingdom Hearts , the messiest and most complicated story in JRPG history

Weird. How does VII Remake have an “ending” when it is just Midgar? I would assume the game just ends after the Motorcycle escape out of town with a “To be continued”

It sounds like they’re changing some elements of the story - it wouldn’t surprise me if the twist is something like “Cloud in the original FF7 game is using the power of Mako energy to reach into his own past and rewrite the future” or something along those lines. Would be on brand for the weirder Square games.

Kingdom Hearts story is such an unmitigated catastrofuck the Nomura thing is a big turn off for me :(

(I have exactly zero horse in that race except that I am desperate to watch Brian David Gilbert descend fully into unrecoverable insanity making a second, definitive attempt (incorporating the third game) to make sense of Kingdom Hearts on Polygon’s Youtube channel someday)

That was brilliant. And it’s actually the most comprehensible version of the story I’ve seen so far.

I wonder if this guy made a video after Kingdom Hearts 3?

Pretty much 100% of BDG’s Unraveled videos are amazing, but that’s one of the best.

Probably the wrong place for it, but this one is my favorite https://youtu.be/XUKW0EsMSyQ

Holy shit this is awesome. I’m about 3.5 hours in and I’m really, really enjoying it - from the visuals and music to the combat and RPG mechanics (leveling up your weapons, adding materia and leveling those wonderful little orbs up) and all things in-between, this is really firing on all cylinders for me. The characters and story are pretty wild so far, fun and completely taking me by surprise - a combination, I suspect, of a lot of new coupled with my last play through of FFVII was when it launched on the PS2, so many a moon ago.

I grabbed a few images to entice and show off. 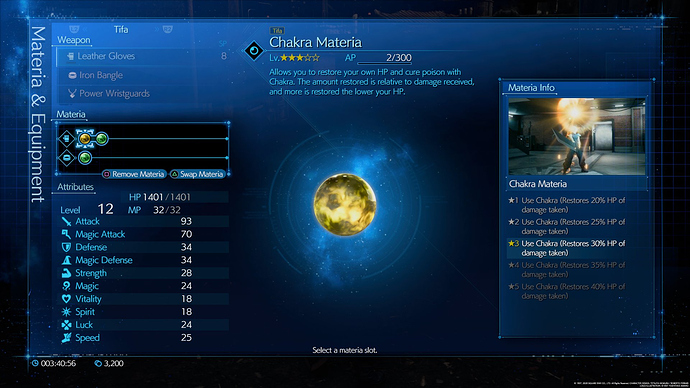 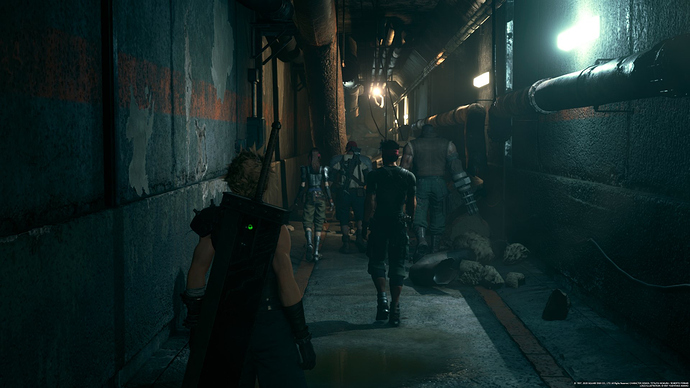 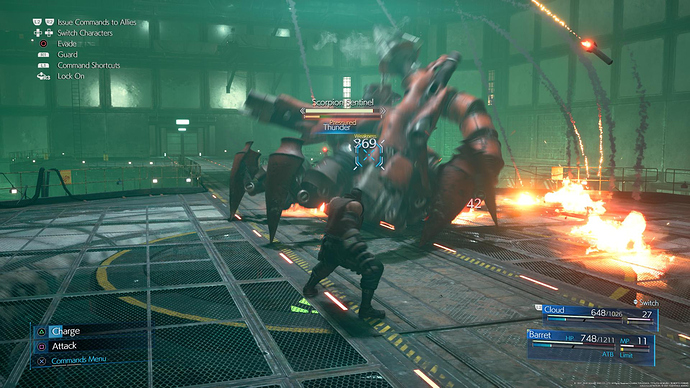 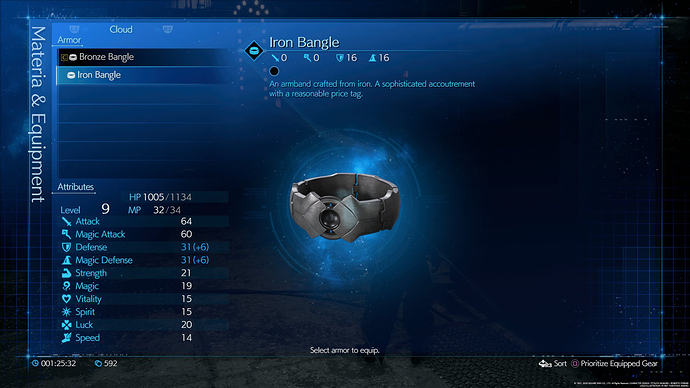 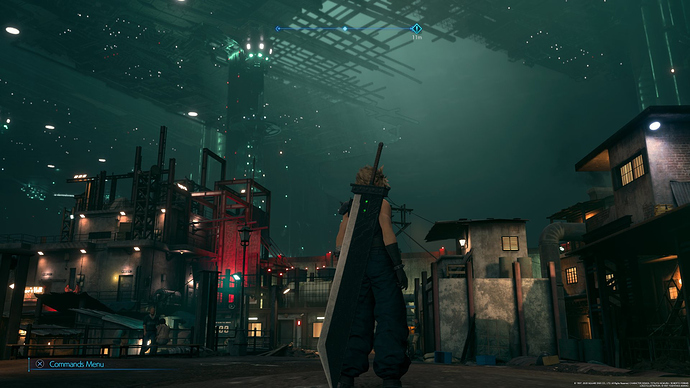 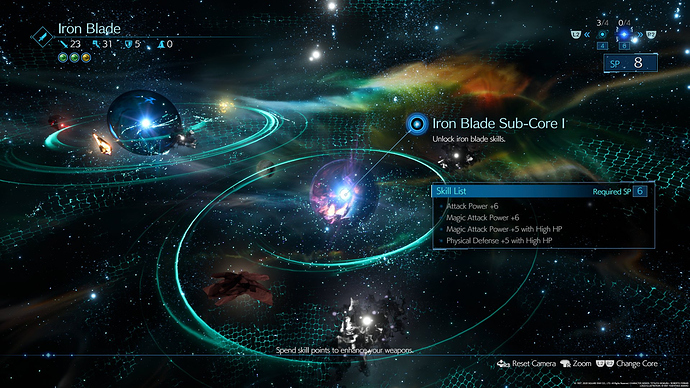 I stuck with Normal difficulty after playing the demo and it feels perfect so far - enemies have weight, I feel pressured (in a good way) to use my resources from potions and ethers to even grenade items and the intel log to determine weaknesses and how to easily stagger my enemies. The combat is similar to what I remember FFXV combat being, but a lot more fun and interesting, with more traditional abilities and spells being used, and being able to manually control your team mates (as well as issuing commands to them without having to command them directly). I’m still very early in, about 10% from what the reviews said, and I haven’t even had a 3-man party yet!

I’m going to be playing the hell out of this after work tonight. My plan was to “go slow and enjoy it” but I don’t know if I’ll have the willpower to not pour hours into this as often as I am able. We’ll see.

How’s the language? Barrett cussed enough during the demo that I didn’t really like having my 6yo watching.

Barrett is the biggest offender but there’s quite a few conversations that will toss a “shit” or “asshole” around. During normal gameplay I’d say you’re safe but cutscenes are hit or miss for bad language.

I’m about 4-5 hours in, on Chapter 5, and just loving this game. If you can look past some really bad dialogue and voice work (Barrett and Generic Over-the-top JRPG Villain, I’m looking at you) there’s some really good character work between Cloud, Tifa, and Jessie. The combat also really starts to open up as your party fills out and you start fleshing out the materia and upgrade systems. I’m playing on normal as well and have wiped a few times because I wasn’t taking advantage of all the skills I had at my disposal and just trying to “brute force” the fight. That’s been a welcome surprise from the demo where it seemed like just spamming the attack button could get you by.

I’m with Scott on this one, I can’t wait to get back in to this every day and it’s taken over all my other gaming as a priority.

Man, that’s a gorgeous font and menus. It’s just a pleasure to look at the menus there. I wish every game had this much care into making the menus look easy on the eyes.

I know, right! I’ve always been a sucker for a gorgeous UI, and this game is delivering in spades. The map and quest tracker is amazingly well done, too, but I only discovered it this morning and haven’t taken any screens of it yet.