We watched the first season when it aired, and we liked it. It’s no Rick & Morty or anything but it’s loads of fun.

Very much looking forward to season 2.

There’s another thread about this elsewhere, and I posted my thoughts on it there. In short: I thought it was well produced by hated the writing, especially everything Gary says and does.

We need a merger of the threads!

Season 2, episode 1 dropped last night on Adult Swim. Thanks to a generous friend here, I got to see Season 1, and wound up going ahead and buying it on Google Play, as well as the Season 2 pass.

I think, by the end, I still kinda hated Gary. He really irks me, albeit less so as the series goes on. And in a way that isn’t “fun” like KVN. But damn, apart from that, this show just 1000% grooves for me. Scifi rich with a lived-in, gritty feel; ridiculous over the top comical absurd characters; nonsense fucking Cthulhu Lovecraft shit lurking beneath the darkness of space; crazy neon-hued space battles with explosions and fighter jets and daring sacrifices; epic fucking music and animation with more pizzazz than I’ve got z’s to spell; loathsome villains, killer heroes, engaging extended cast; great voice actors; schmaltzy emotional beats and FEELS; AND serious, serialized storytelling?!

Fuck, this couldn’t be more up my alley if it was the brains of a xeno spattered all over the alley’s concrete by a hyperlaser.

And Season 2 starts with a motherfucking goddamn SPACE RACE

@BrianRubin PUT THIS SHIT IN YOUR EYEBALLS

Every time I watched an episode I just pretended like it was one of the game sessions you’ve described in the tabletop thread! :)

Was that KEITH DAVID in that trailer? Wow. I need to see this.

No, it was CRAIG DAVID.

You had me at Claudia Black. 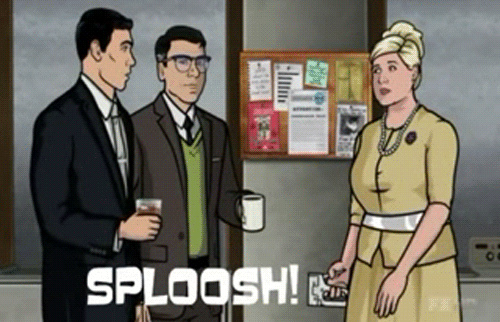 On my way to see my friends who lived a couple blocks away from me (oh)
As I walked through the subway
It must have been about quarter past three
In front of me, stood a beautiful honey with a beautiful body
She asked me for the time
I said it’d cost her name, a six digit number and a date with me tomorrow at nine

I got a 30 day trial of VRV, and I think it’s VRV select that has the first season of Final Space. Finally! I’ve been wanting to track down this show forever.

I watched the first episode tonight, it was okay. But man, sometimes it’s freakin’ gorgeous in a way I have never seen before in a show. There’s certain scenes that look like intricate art covers.

The show is genuinely beautifully drawn; some of the far out mind fuck scenes are just awe inspiring. It’s extremely worth the price of admission.

But you gotta get back on Netflix for She-Ra, man!

you gotta get back on Netflix for She-Ra, man!

Hulu just has so many good things though. It’s my own fault for not rotating to it earlier, but I realize now that I hadn’t subscribed to Hulu since August of 2019, so there’s just so much good stuff to catch up on. I’m not helping matters by doing the free month of CBS All Access and VRV on top of it, of course. Not helping matters at all!

But that’s not my fault. It’s Hulu’s fault for not having the Volleyball anime’s season 3 dub yet. I gotta finish that season!

It only gets better. Particularly once you begin to realise Gary is not actually a bumbling idiot, just a little juvenile.

It manages to generate to truly moving scenes in both seasons.

Gary continues to be the worst part of the show through a good chunk of it, a little like Smirky McLeadface in B99. . .

. . . and yet Final Space is my second-favorite animated show I’ve watched in the last few years.

I noticed Fred Armesan is always the first name in the credits. So that means he voices Gary? It doesn’t sound like him at all to me.

The look and feel of the show reminds me of Star Trek Lower Decks.