So this is a pretty quirky 6 episode series that I pretty much loved. I have a feeling that is mostly because the lead actress is the spitting image of a girl I lusted after in high school, but it is also disarmingly charming. Fleabag (that’s the only name given) is a seriously lost soul who is trying to survive life after the loss of her mother and her best friend. This is dark, dark comedy that really goes into the pits of despair in episode 6, so strap in for a wild and cathartic ride.

So this is a pretty quirky 6 episode series that I pretty much loved. I have a feeling that is mostly because the lead actress is the spitting image of a girl I lusted after in high school 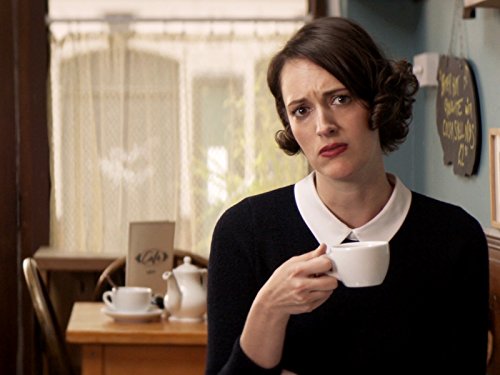 Everyone is someone’s fetish. Even you.

God, I know, her knees right? So knobby.

Started watching this last night after seeing this topic, really enjoying it so far. It puts The Office in the shade as far as glances-to-camera go. The New Yorker has a good review of it here: http://www.newyorker.com/magazine/2016/09/26/fleabag-an-original-bad-girl-comedy

Thanks for the heads-up on this show or I might have missed it otherwise. I thought I would dip in and watch some of the first episode to see if it was something I might be able to tolerate and ended up binge watching all six episodes. I hope they think about doing a second season but the first season is just about perfect.

Yes, this was excellent! Many cringe-worthy uncomfortable moments were had.

Fleabag (that’s the only name given)

Wait, what? Holy cats, I’m only now realizing we never know her name! The show is so intimately first-person that never even occurred to me!

It puts The Office in the shade as far as glances-to-camera go.

Absolutely. That’s for a couple of reasons, but mainly because the conceit behind The Office is that there’s a documentary film crew watching. The conceit in Fleabag is much more intimate. She’s looking at you, talking to you, directly, not through a camera. The Office introduced something referred to as “camera awareness”, in which the characters know they’re being filmed. By contrast, Fleabag is a first-person story living inside a third-person presentation.

I hope they think about doing a second season but the first season is just about perfect.

God, no, please no second season. Fleabag doesn’t feel like a series, and for good reason. Waller-Bridge wrote it – and maybe even staged it? – as a play. It’s a feature-length self-contained story with specific reveals based on learning who the character is. Once you learn who the character is – her relationship to Boo, her sister, her father, her dead mother – the story’s work is done. Anything additional would feel like a pointless epilogue.

She wrote and acted in another series about the same time as Fleabag. It’s called Crashing. Anyone see it? It sounds like something, well, frothier than Fleabag.

She was also in a show I’ve heard of but don’t know anything about. Is Broadchurch good? There’s probably a thread here about it. I wonder how much she’s in it.

Crashing was fun, but I didn’t enjoy it as much as Fleabag personally. It’s more of an ensemble piece.

She was also in a show I’ve heard of but don’t know anything about. Is Broadchurch good? There’s probably a thread here about it. I wonder how much she’s in it.

Broadchurch was very popular in the UK, but I never watched it. The critical consensus seems to be that the first season is good (especially for an ITV show) but the second is terrible.

Crashing definitely has a unique premise, but it has little of the depth of Fleabag. It’s fun once you stop being irritated by these broadly obnoxious characters and settle in for the shenanigans and occasional pathos. With Fleabag, Phoebe Waller-Bridge Has an Agenda. But Not the One You Think.

Fantastic article. Thanks for sharing!

Series/Season 2 is happening. The better news is that they’re going to take their time; it won’t expect to air until 2018.

‘We are all trying to make it work.’

Dude, stop falling for the internet! The actual story – instead of the usual internet filter of a story about a story – is here. And the entirety of the “confirmation” is this:

Speaking at the Broadcasting Press Guild Awards, Waller-Bridge revealed that she was only keen to bring the blackly comic story back if she had a “an idea that was good enough”.
“I think I have one,” she says, although she won’t reveal what that is. However she added that the plan is to shoot another series in November for an expected broadcast in 2018. “We are all trying to make it work and have the same team back.”

So, yeah, there are meetings about possible scripts. In other words, no change from where things stood last year. I’ll believe it’s happening when it’s actually happening and it’s not an actor/writer saying it might happen.

And frankly, I’d rather Phoebe Waller-Bridge moved on to tell different stories. Fleabag is such a powerful, compact, and complete story.

I’m with Tom. Leave this one be and move on.

I haven’t finished it yet but I’m really enjoying Season 1. This is the funniest line I’ve heard in ages:

“It’s really inappropriate to jog around a graveyard… Flaunting your life.”