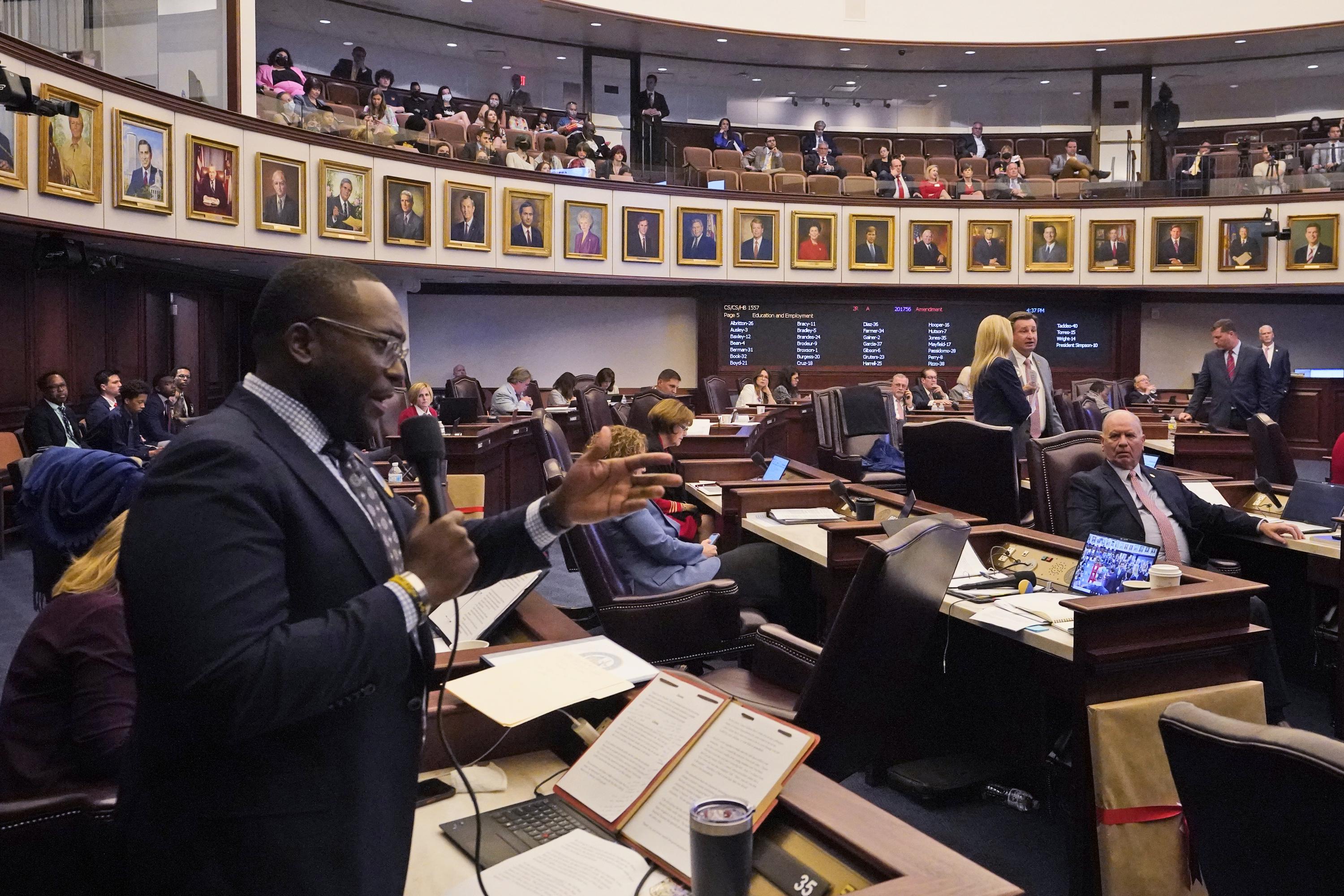 TALLAHASSEE, Fla. (AP) — Florida's Republican-dominated legislature passed a bill Tuesday to forbid instruction on sexual orientation and gender identity in kindergarten through third grade, rejecting a wave of criticism from Democrats that it...

God I can’t wait until all these people die.

Are they not allowed to mention gender at all? I feel like the people making this law likely didn’t really think it through, and it will open stuff up to lawsuits for things that they would have considered “normal”.

Like, you can’t talk about families at all, even straight traditional ones, without some discussion of gender.

No no see you can talk about “normal” people just not those awful ell gee bees.

Fuck these politicians. I wish exquisitely horrible things on them that I won’t write out in detail here so I don’t get banned :-)

The GOP is gay. In fact, Florida is gay.

No no see you can talk about “normal” people just not those awful ell gee bees.

See, I know this is what they intend… But also, I know that they are very, very stupid.

So I’m thinking that sometime could probably sue the state, on the very basis of this bill, for doing something like talking about “traditional Christian family values”.

So many people moved here during the pandemic, that I can tell just from driving around these days. Traffic is significantly worse than just 2 years ago. I thought maybe a lot of that is just my perception after covid killed traffic and then it came back but I see the numbers coming out and see the housing dry up and I think it’s real.

Anyways, my point is that I think a lot of people are coming here that are politically aligned with all the headlines. Basically I think DeathSantis’s gambit is working: be a super shitty, unapologetic asshole and lots of people will vote for you. There’s an election in November but I have no hope. Even if the Governor goes to a Democrat the legislature is gerrymandered to hell. Florida is doomed. I know you guys and a lot of people like to talk shit about it but it wasn’t like this when I grew up. I know that’s the same for a lot of places but Florida was really very center of the road for a long time. I don’t think enough pricks died to COVID to offset it either.

I’m sure you guys are going to blast me for this but honestly I don’t think my kids should be getting any sort of gender or sexual education K-3 from my school. Really, that seems more of a High School topic to me not Kindergarten. If I do feel like my child needs to be taught prior to that I’d much rather I do it myself than some stranger in a school.

If I do feel like my child needs to be taught prior to that I’d much rather I do it myself than some stranger in a school.

It’s what seems to be an intentionally vague, poorly written bill which opens up the school to lawsuits at any point in a student’s academic career, including well past the age where such discussion is commonly had amongst students. Standard fear of lawsuits, in turn, will restrict the schools from mentioning it at all, meaning the societal default of heterosexuality will be reinforced. This fear of lawsuits could have further spill-over affects which would be harmful to students, as well. Time will tell, I guess; I just hope the people who put this bill into being find an abruptly short end to their political lives.

I’m sure you guys are going to blast me for this but honestly I don’t think my kids should be getting any sort of gender or sexual education K-3 from my school. Really, that seems more of a High School topic to me not Kindergarten. If I do feel like my child needs to be taught prior to that I’d much rather I do it myself than some stranger in a school.

To me it’s a health issue. Children can (and do) challenge their assigned gender or sexuality, even at very young ages, and schools need to have the tools to help support those children. Like, even if a parent doesn’t believe in vaccines or measles, a school nurse needs to be able to act on those concepts.

I’m of a similar mind, and also completely open to deeper analysis of the issue (aka Twitter doesn’t constitute deep scientific analysis) but I tend to fall on the side of letting kids be kids until the crazy hormones start flowing, and then see where the chips fall. Dumping a bunch of adult sexual and gender things on them before they have developed the same seems counterproductive. Also, and this is a tangent, we really need to consider how we’ve enabled access to hardcore pornography for children more or less as soon as they get a smartphone; that can’t be healthy.

Honestly the anti-abortion bill just passed and I’m a little surprised that’s not getting more news.

Sometimes trans kids know they’re trans even before puberty, I don’t know how common that is, but it’s been known and documented.

Going through life knowing something is “wrong” with you, but not knowing how it is, is a hell of a problem…

Stuff like puberty blockers should be allowed for teenagers who are questioning, I can see no hormones until 16 or so, and no surgery until 18 (these are already standard practices), but blockers earlier is fine. Yet a few states will give life in prison for that ( a law was passed for that today in one of the Dakotas)

It’s clear that Republicans are trying to transit trans folks right now to otherwise them as a moral panic- which given their penchant for “managed democracy” could lead to outcomes similar to how LGBT folks are treated in Russia.

You know it’s bad when pro wrestling is protesting against this bill.

Completely beside the bill, to be clear, but I’m not on the side of hormone blockers for children. No doubt there is tons of gender confusion pretty much from age 4 (when we become people/people rather than animals, YMMV on when you form memories) on, but there’s also the basic progression of biology that is 99.something common to every human. I don’t get behind stopping that process artificially by medical intervention. Once someone is on the other side of what their body is doing, and that’s all of us, and it happens at roughly the same five year interval in our lives, then it’s time to dig deeper and see what’s what, as far as making sure they have a future that fits their brains. Brains, however, are pretty damned frangible before that, but that’s my opinion and observation.

Blockers just delay puberty, you might lose a little bit of development at most I believe.

Puberty is something children who are trans are terrified and traumatized from, and it does do things that are very hard to fix.

There’s a lot of misinformation and demonization about blockers- some of this is intentional from the evangelical lobby.

That’s a conversation I’m willing to have. My initial stance is that messing with something that fundamental is probably ill-advised, but as I say I’m willing to learn otherwise.

Understand how pubertal blockers work to suppress puberty, including their benefits, side effects and long-term effects.

This is a good starting point of risks and benefits. Generally, when a child says they are trans, 99% of the time they are right, but it’s reasonable to use blockers until they are 16 or so and can make a decision. Generally, if someone who isn’t trans starts hormonal treatment, they rapidly develop dysphoria and wish to stop quickly. This is what famously very similar to what happened.to Alan Turing psychologically which led to his death.

Information on puberty blocker medication used to delay the onset of puberty.

This is a more optimistic view from Canada. A lot of trans medical stuff isn’t well known, which the Nazis can be thanked for- they set research back a generation or two with book burning.

Reading now, my first note would be:

That places the decision point at puberty not before. That’s not a point either way between us, but I think it needs to be outlined as it somewhat jibes with my thought that until the rough juices get flowing (sorry for such a clunky phrase) we shouldn’t intervene.

Second thing, I’m not a fan of this:

Use of GnRH analogues might also have long-term effects on:

If children with male genitalia begin using GnRH analogues early in puberty, they might not develop enough penile and scrotal skin for certain gender affirming genital surgical procedures, such as penile inversion vaginoplasty. Alternative techniques, however, are available.

In addition, delaying puberty beyond one’s peers can be stressful. Your child might experience lower self-esteem.

I guess my position wouldn’t move that much considering the risks in your article. My impression is that gender dysphoria should be strongly addressed from the mental and sociological side rather than the medical side during the first 16 or so years.