Has she done anything? Anything at all? How is her battle against cyberbullying going?

Not really, but then again they rarely do. I wouldn’t be opposed to going back to the era where they weren’t involved in things.

what does she stand for? if she stands for nothing, what will she fall for?

No one deserves that mental image.

We should collect the various gifs of her being repulsed or shunned by Trump in this thread.

Not really, but then again they rarely do. I wouldn’t be opposed to going back to the era where they weren’t involved in things.

Except Eleanor. She might have swapped gigs with her hubby to advantage.

The princess has been locked in the tower by the evil usurper.

She is actively doing something though. She’s suing for bad press impairing her ability to grift off the office of FLOTUS in spin-off merch.

I don’t give a shit what her previous station in life was, or how horrible the oppression in buttshitistan was.

Melania is now actively shitting on my country, and she can walk the plank with the rest of them. Fuck her.

Nancy Reagan, Laura Bush and Michelle Obama all had pet causes and positive outreaches as part of their role. Melania is complicit, worthless garbage that has supported her husband.

What I meant to say was “OFF WITH HER HEAD”

It’s great that we taxpayers are footing the bill for her to live in a golden tower in NYC because she can’t stand to live in the same state as her shitbag husband.

It’s great that we taxpayers are footing the bill for her to live in a golden tower in NYC because she can’t stand to live in the same state as her shitbag husband.

Yeah. If the kid wanted to finish the year of school or whatever, I’d be mostly okay with it I think. But “we’re just gonna live here forever and you’re gonna pay for it,” is complete bullshit.

First lady Michelle Obama is making sure that whoever inhabits the White House next doesn’t rip out her iconic vegetable garden — at least not without a big fuss.

On Wednesday afternoon, Obama unveiled a much bigger version of the garden, which uses cement, stone and steel to make it a more permanent fixture on the South Lawn. The updates are seen not just as preserving Obama’s garden — recognized globally as a symbol of local food — but also as a way to dissuade, say, a President Donald Trump from scrapping it the way Ronald Reagan tore out Jimmy Carter’s solar panels after he moved into the White House.

“I think people would be really upset,” said Marta McDowell, a landscape historian who recently wrote a book on White House gardens. She called Obama’s preservation plan “brilliant,” adding, “If it were taken out, it would truly just be a political statement.”

God, you guys are so sexist.

The poor woman looked utterly exhausted in that twiiter gif.

PS. What on earth is active shitting?

PS. What on earth is active shitting?

God, you guys are so sexist

In framing her as an advocate for women’s rights when there is close to zero evidence she has ever actually advocated for women’s rights, Trump told us more about himself than he did about her: Women are good for photo ops, not for real positions of power.

You see this as well in Trump’s treatment of his daughter, Ivanka (and in Ivanka’s own corporate-friendly, faux feminism). Ivanka tweeted a photo of herself sitting at her dad’s desk in the Oval Office, flanked by the President and Canadian Prime Minister Justin Trudeau, along with a caption about the importance of giving women “a seat at the table.”

Of course, it is Ivanka’s husband, Jared Kushner, who has an actual position on the Trump team, and not Ivanka herself.

According to Trump, Ivanka is also a “great person – always pushing me to do the right thing.”

Worth mentioning that Spicer also deflected the question about Ivanka’s exact role in the White House today with, “she has a lot of expertise in the area of helping women.” 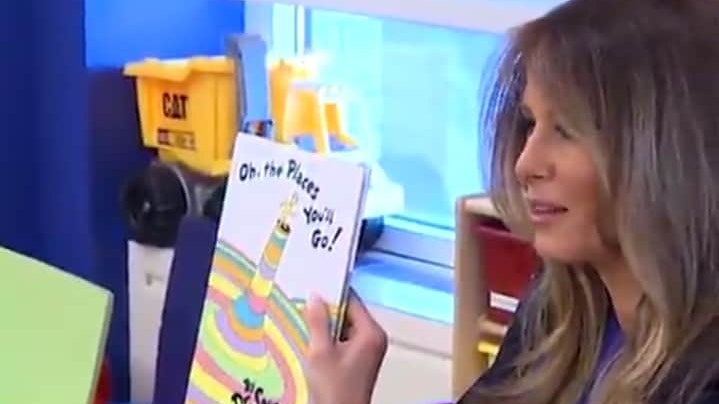 The White House Sure Has an Interesting Characterization of Melania Trump's...

It's almost as if facts don't matter.

Here are some things Melania said during the visit, via the pool report, which is cobbled together from the multiple news organizations that were present:

“We will read some books today. So do you know what is today? It’s a reading day. So I came to encourage you to read — and to think about what you want to achieve in life.”
Do you like the book? I will leave it here. I encourage you all to read a lot. To get educated."

And here’s how the White House characterized her remarks in their press release on the event:

Afterward she spoke with them and said, “Loving to read early in life has the power to make each one of you a lifelong learner."

“Dr. Seuss has brought so much joy, laughter and enchantment into children’s lives all around the globe for generations,” the First Lady said. "Through his captivating rhymes, Dr. Seuss has delighted and inspired children while teaching them to read, to dream, and to care.”

The First Lady emphasized that as a Nation, we must instill in young readers a lifelong love of learning.
“Education is a great equalizer and nothing can be more critical to achieving empowerment than reading and literacy,” said Mrs. Trump.