For All Mankind tv show - guy who wrote new BSG/Caprica

This show is pretty good if you’re a Right Stuff fan, its totally worth it so far. Premise is that the Russians beating the US to the moon actually pushes the space race farther and faster. No spoilers, but the alternate reality is very subtle until by the end of episode 5 the show is off on its own history completely (almost saddens me for our reality!). Also the female astronaut angle is handled well, I’d say its the best part of the 5 episodes out. The show seems to be hiding its cards. I am guessing its either going to turn into a military space show or aliens come into the mix? Either way its a good space soap opera with a ‘love’ of all things NASA.

Also Moore’s Caprica is underrated, it was a good show that needed one more season. I trust in Moore, though haven’t watched his time travel romance thing yet, but that got good reviews. And we all know BSG New was great.

But do They Have a Plan?

More importantly, will said plan get derailed by a writers strike?

Yeah, no idea where they are going long term. There’s clearly more in store than the basic idea of women becoming astronauts. I could see it being something like Space Brothers where they are learning how to live on the moon, solve problems, deal with accidents, etc. but you are probably right that there’s something bigger in store.

Wife and I have been really enjoying this one. Really like how they have handled Molly as a character in episodes 4-5.

Yesterday’s episode was a nail-biter, sheesh. Now I have some inkling of how the people watching the Apollo 13 coverage in real time felt (except back then it was real life, not some TV show).

What channel is this show on? I like Ronald D. Moore. (Though Caprica relied too heavily on crappy CGI.)

we all know BSG New was great

For one and a half seasons, yes.

I really like this show: the slow burn of the plotlines, the care taken in characterizations and to make sure all of them are complex, multifaceted people, the fascinating weave of history and alt-history. It’s just a really good show. Shame that it’s on Apple TV+ and will get little attention.

About halfway through tonight’s show and it’s just brutal so far. What a horrible situation.

BTW I notice they have obvious analogues of Walter Cronkite and Barbara Walters (or “Baba Wawa” in the late Gilda Radner’s incarnation). I guess they couldn’t get the rights to their names for the show.

Most of the characters have different names (like Gordo Not being Cooper).

They’ spent a lot of time on Jamestown crew and a couple other storylines these last couple episodes. They don’t seem to be in a big hurry to go somewhere, which is fine. Honestly it is reminding me of watching the anime Space Brothers (which I love). Not a complaint, just seems unusual these days.

Well sure, they had to create some fictional characters in order to accommodate the alternate history where the US has a freaking moon base by 1974 (despite the Vietnam War, Watergate etc.).* I was just surprised that they did so for people who were well-known public figures like Cronkite and Walters–obviously the actors picked for those brief scenes are meant to be them–the Barbara Walters analogue has the exact right voice pitch that I remember.

They left last night’s show on quite a cliffhanger. I thought Ed was going to open the airlock or something.

Cripes, the ending of tonight’s show was all kinds of effed up.

I finished all but episode 9 this weekend. Quite a good show, although I’m sure my obsession with all things space probably influenced my opinion. It’s weird they were surprisingly accurate in their flight control conversations and then missed things like needing 38 states not 37 to amend the constitution.

The last two episode had a lot of drama. It seemed very Kerbal-like with RCS thruster and other fun things. Really looking forward to the second season.

Wow, that 10th episode was a hell of a season-ender if that’s it. I do think it was kind of a cheat to not show us how Commander Wilson or Williams (?) all by her lonesome got the fuel into the command module’s and LM’s various tanks and such, and got the LM down to the surface. I guess they figured the audience would stroke out from all the suspense.

So we know for sure there’s another season coming?

I do think it was kind of a cheat to not show us how Commander Wilson or Williams (?) all by her lonesome got the fuel into the command module’s and LM’s various tanks and such, and got the LM down to the surface. I guess they figured the audience would stroke out from all the suspense.

So we know for sure there’s another season coming? 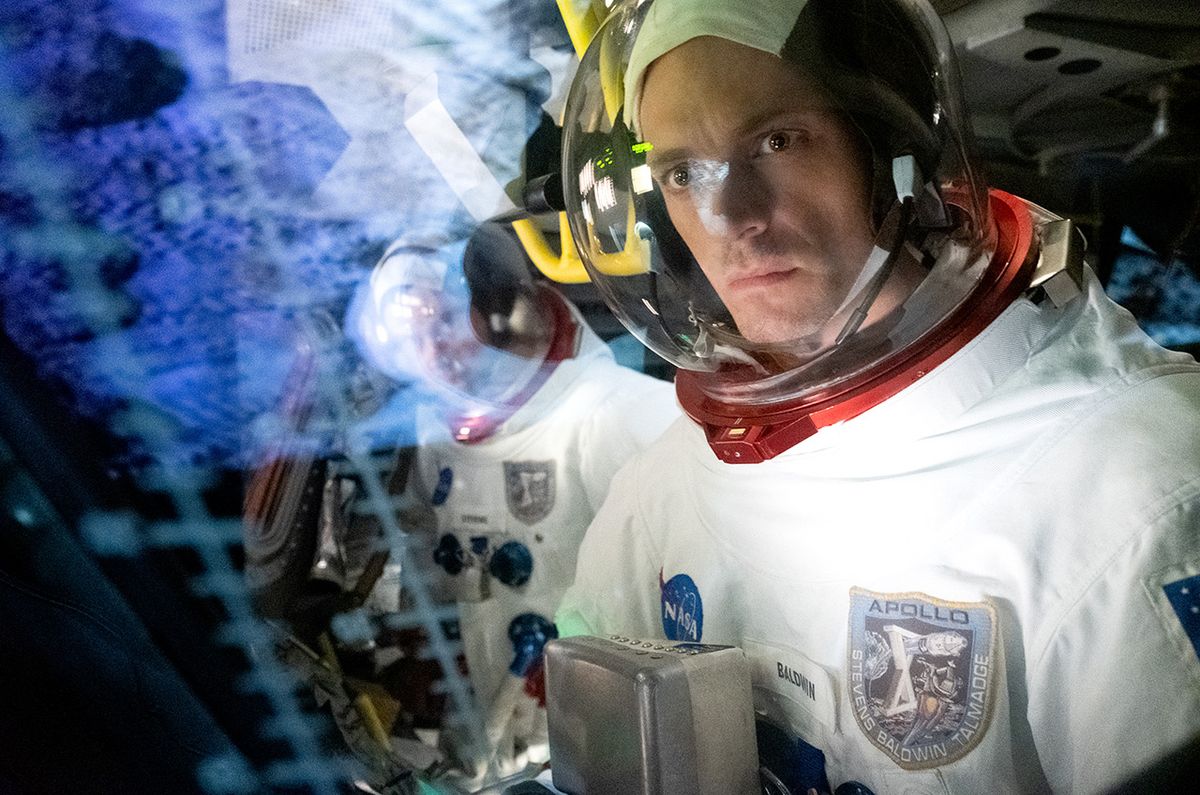 'For All Mankind' on Apple TV+ Officially Renewed for Season 2

Houston, we have a Season 2.

So the season has already ended? I am going to wait to activate my Apple+ subscription until the last possible moment, which should be end of January or beginning of February since they said I had 3 months to do so.

I wonder if their other shows’ seasons are ending now as well.

So we finished this last night and I have some few feelings. For those interested, the show is currently free on Apple TV+ due to the virus lockdown.

I really enjoyed the alternate reality-building & the way the creators leaned into the “real” parts with edited real and faked presidential tapes & photos, fictionalized versions of people from our timeline, mostly real physics, etc.

It didn’t make sense (to me) that multiple characters are lectured on the realities of orbital mechanics, but then those same physics get thrown right out the window for dramatic effect in the dumb astronaut rescue and fuel-tank throw parts of the last episodes. Space is large & mostly empty, making both of those events absurdly improbable. Is real space travel not dangerous and dramatic enough already?

What’s the point of the immigrant family & teen daughter (Aleida) storyline? Within the current season she serves only to soften the edges of Margo’s character & give her a little emotional depth. Aleida and her father’s screen time is wasted because she doesn’t do anything that ultimately matters to anything or anyone (unless the series lives long enough to make her an astronaut herself). That’s an awfully long payoff and character arc for a series that’s unlikely to live so long.

There are, overall, too damned many characters, which leads to some getting short shrift & others unnecessarily much. Astronaut Poole is almost literally the token black woman she complains about in the series, for example. Yet Deke Slayton gets so much screen time. I know his character is an homage to a well-loved person from our reality, but his character arc is telegraphed so obviously from early on that it’s kind of tedious and exasperating to watch it actually unfold.

I might have been happy watching more of the cerebral Wernher & Margo design & manage the alternate future space program show & a bit less of the astronauts are dramatic and troubled American heroes show. But the astronauts-as-heroes trope is well-established now & most people would probably find the other super-dull. So it’s probably as well they didn’t do this :-)

Overall I’m giving this a C+. Has potential, is fun to watch & is probably better than average. But also wastes a lot of that potential, is slow in many places, and is just plain dumb in many others

I agree that the fuel tank tossing stuff was ridiculously far-fetched. What made it even worse is that they completely glossed over / hand-waved how the “receiver” managed to wrangle said fuel tank into position to connect it to and transfer the fuel to her own vehicle’s tank(s). It was pretty darn silly.

As far as Aleida goes, I guess the there’s an investment there which won’t have the time to bear fruit, as you write. BTW is that a real Spanish name? I’ve never heard it before. I’ve heard Adela and Adelaida but never that one.