Original Post
This has been devouring my life the past month or so, it’s managed to grab me the same way Factorio did.

It’s a block based game engine similar to Minecraft with a primary focus on building infrastructure and automating it with tower defense like elements. Similar to many modded games of Minecraft, if you ever checked out that scene. Mine ore, smelt it, build guns for defense culminating in charging an orbital cannon to end the threat permanently. You will be researching and upgrading your machines, similar to Factorio, and just like that game there is a metric ass load of content.

To be clear you can ignore the tower defense element for the most part until the very end, the penalties for your base getting destroyed are exceptionally minor. You can’t really lose and nothing is destroyed.

Trying to to get anything done is that perfect mess of a thousand things wanting your attention at once. Upgrade your smelting lines? Smooth out your throughput for the lithium mine? Supplement your laser cannons with a missile battery? Add a drone network to automat collecting all the loot the enemies drop? Research is constantly giving you new options and or things to upgrade.

The game turns me into that proverbial chicken with its head cut off. I am constantly being distracted by one task that is dependent on another and forgetting what I was originally doing. I love that.

The game is technically released but always under constant development. The developer runs a live stream almost every day and publishes those changes to a bleeding edge beta on Steam. He also just released an expansion pack which you can ignore for the most part. It’s content you won’t see until you are 100+ hours into the game. The other two DLC are pretty much ignorable too, pretty much a tip jar for the guy if you want.

I just charged the orbital cannon last night for the first time, so I am headed into the expansion pack after 160 hours. That’s… excessive but I wasn’t kidding about the chicken sans head - I am very easily distracted and have built and rebuilt my infrastructure a dozen times by now. God help you if you like to optimize.

Documentation is the downside. It has a decent in game system and a tutorial that helps but there is a lot going on. No good wiki unlike other similar games.

My base at the end game. It’s an unattractive mess compared to most I have seen. 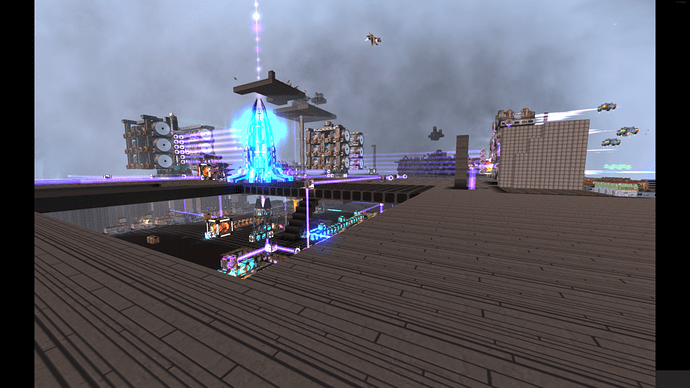 I’ve played about six hours of this game since it first popped up on Steam, but I just couldn’t continue due to the performance issues. I’m assuming it got better with the 1.0 release?

I know he has done a lot of work and is doing more but I was running a silly high FPS at the start and that slowly degraded over time as my base grew.

On an i7-2600k the fps did go from almost 200 to 20-30 now at the end of the main campaign. Which is fine for me but if you need 60fps I would build your base spread out and not condensed like I did. It’s highly multi threaded, it will peg out all my cores easily.

Also I would leave it on ‘Good’ and not something higher at least as you get further into the game.

A guy named Cairon on YouTube has a number of Let’s Play videos for anyone that needs more information (I found him via Banished/Factorio Let’s Plays, but I found him to be near Arumba-like as far as speaking clarity and “cleanliness” of presentation).

Okay, the OP description was enough to get me to pick this up. Sounds awesome!

…wow, their onboarding really isn’t very good, is it?

It’s a rough start, there is a lot to take in. I found it all flows great after a short, vertical climb. A quick YouTube intro video like the ones recommended above would probably be a big help. I picked a random one and after 20 minutes was good to go, getting the basics down.

Since we’re comparing this to Factorio and modded Minecraft, are there any handy “what’s included/what’s not” tables available? (Yes, I’m too lazy to look for them.)

Considering how expansive all three of them are that would be one exhaustive list.

Fair enough. Minecraft and Factorio have a lot of common features and very different game play experiences, so was hoping for a basic bird’s-eye view.

Yeah, I’ll probably scope a YT intro vid and go from there. Just wasn’t processing everything in a post-toddler-dinner world.

Fair enough. Minecraft and Factorio have a lot of common features and very different game play experiences, so was hoping for a basic bird’s-eye view.

Really, if you can imagine Factorio built with a block engine that supported highly detailed blocks plus enormous multi block structures then you have it. The sense of exploration and discovery isn’t as good as minecraft and the automation and logistics isn’t quite up to Factorio, but it’s close and more than the sum of its parts. A minecraft mod pack like FTB with pipes, applied energistics, redstone flux, etc would be the closest, but missing the tower defense aspect and overarching goal.

Yeah, I’ll probably scope a YT intro vid and go from there. Just wasn’t processing everything in a post-toddler-dinner world.

My first attempt at playing the game with the tutorial was a dud as well. I then watched another guy on youtube play through the same thing for 20-30 minutes and felt stupid. Just too much to take in for my poor little brain all at once I think.

Okay, I’m starting to get it. Pretty sure this is really cool.

Also, is there a way for my CPH to automatically pull coal from a hopper, or is that always manual?

Also also, can I automate smelting by having a hopper next to a smelter?

Pretty sure that’s a known bug, if you restart the game it should go away.

Also, is there a way for my CPH to automatically pull coal from a hopper, or is that always manual?

The CPH should pull coal out of a hopper automatically (just tried it, works - though it won’t pull if you don’t need the energy)

Also also, can I automate smelting by having a hopper next to a smelter?

Absolutely. Two things that were non obvious to me though.

Ah hah, that makes sense. I did figure out the CPH pulling coal thing; I was expecting it to be dumber but it waits until it’s down to a certain power level and then pulls the coal. I figured out the smelter thing too, eventually, though the splitting ore thing is cool new info.

Larger issue: my perf went to absolute balls after an hour or so playing this morning. I was digging down to try and find new and exciting veins (seems like I need Iron and Lithium to keep progressing), and at some point a red-text debug message showed up and my framerate tanked. Haven’t loaded it up since; maybe it was just a memory leak or a bad handle or something that will be sorted on reload.

Apparently the latest patch was accidentally released as a debug version which is going to be 2x as slow and have a scary red dev console. He has a release test up on steam under the betas tab as ‘release_build_test’ which works great for me, though you may want to backup your game world before trying it (C:\Users\username\AppData\LocalLow\ProjectorGames\FortressCraft)

With that said, even at 2x slower this shouldn’t matter in the early game. Once you get a massive base going then maybe, but for now you shouldn’t experience any slowdown. I am at depth 700-800 now with a lot going on and I still get min 19fps with the release version and it’s usually around 40-50.

Is there any kind of tech or something that will make a beam of light that penetrates rock. IE: I want to create a shaft from the top of the world to to some place underground, however, I have no idea where on the top of the world to start digging down. Also, I can’'t find any god damm lithium ore. Biblical amounts of iron, copper and tin, but no lithium.

In bleeding edge there is a waypoint machine that will do that I think. Or you can open chat and type /coords

Are you using your scanner to ping unknown ore? That should make it pretty easy to find lithium.

Do you get better generators at some point? I am having to run coal conveyors all over the place to make mini power stations because the output of these things are so pathetic. I wish there were also normal, cheap wires to link them together instead of having to make the small energy cubes which are quite expensive.