This is why I don’t sign into Forza any more. I just want to just drive a jacked up VW Beetle on a beach, but I know I’ll be getting emails “[former friend] has beaten your rivals time” and I won’t be able to ignore that.

Does anybody ever use steering wheels and pedals or are you all using a controller? I have both and have never driving for any length of time with a controller.

I have a fancy wheel and pedals, but only use a controller for the Forza games.

I’m using an Xbox One controller. I tried to use my old FFB wheel on FH4 once and it was…not a pleasant experience. I’ve read that FH5 plays better with a wheel than its predecessor does, though.

Wow, that is impressive! Nice job!

This is why I don’t sign into Forza any more.

I think I will get to this point soon because I obsess over shooting for times. I’ll play for a while longer but I sense for my sanity I won’t last too much longer.

Does anybody ever use steering wheels and pedals or are you all using a controller? I have both and have never driving for any length of time with a controller.

Have a wheel and tried it, but went back to a controller.

God, I loved most of those Beetle missions. All except the one about getting a high drift score. All the others, I’m really flabbergasted that they made all these variations of souped-up Beetles for the game that are not only crazy fast, but so easy to drive. (Again, with the except of the one meant for drifting, that one was so hard to drive, I kept drifting out of control).

Oh man, there are Beetle missions? You guys might suck me right out of FH4 straight to 5 (which I’ve barely started)!

I explored the mayan pyramids in the game last night. I thought it was going to be complicated to figure out how to get to the top of them to figure out a jump that would get me up there and get the bonus boards. But nope, they built ramps on the other side of each pyramid so you can just drive to the top! LOL. That was a relief, honestly, that area is relatively flat otherwise, I wasn’t looking forward to trying to find a way to jump up there.

It’s also strange that this game in particular, unlike previous Horizons has a lot of dirt roads that are not part of the “map”. So all these dirt roads out there that don’t count as something I have to paint in as complete. And there seem to be no bonus boards along these mapless dirt roads either. I’m still trying to explore them, thinking maybe there will be something there maybe.

I really like this dry winter season we’re in now. There were quite a few areas, where I was thinking “how the heck am I supposed to get there?”, but now that the water has receded in dry season, it’s really easy to get to those places.

I finished the Born Fast storyline. That leaves only the V10 storyline to go now.

I’m really glad I got the fast travel house early on, I’ve been using that a lot to fast travel when i feel like it. And even before that, I bought the Horizon Promo house so I could start taking pictures. I think I have pictures of 78 cars now, mostly all taken during the storyline missions. Lots of great cars used in the story missions, so I have pictures of them all now.

I have enough money for the daily wheelspin house now. I’ll probably buy that later today.

I just discovered the most amazing thing ever!

If you go into audio options and scroll down to the bottom you can disable the radio DJ so the stations only play music.

You can also just turn the radio volume down to 0, and play Spotify instead.

Back at you, Penny!

(P.S. Please don’t beat the time. I don’t want to lap this car any more)

You are awesome, great time! That is certainly out of my league.

When I challenge some random leaderboard people further up the charts they all seemed to be running the AMG1 without a rear wing?

Is that graphical, or did the bug that let you tune the car in between joining and starting an event work in rivals too?

If it is that bug, then next month’s event (which should be about a week) it shouldn’t be an issue.

If you insist. I’m into Stalker and Terminator right now anyway. Next month I take no prisoners though. 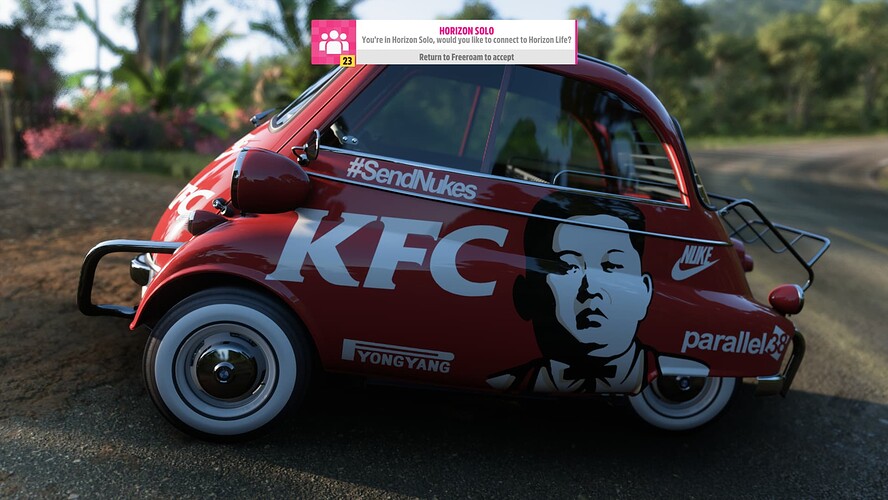 I guess it was the #sendNukes the thing that triggered the ban.

I admire the optimism of the ban, thinking that any humans (or at least human civilization that could support the infrastructure for online gaming–there might be cave people again) will even be around 8000 years from now. At the rate we’re going, I don’t give us another 200, what with the already mentioned nukes, climate change etc.