In the Fall of 1787, after nearly four months of wrangling, brow-beating and arm twisting the Founding Fathers in Philadelphia emerged with a Constitution. Over the next several months it would be ratified by the newly-independent states. They also had a leader, the universally popular George Washington. Now it was time to see if it would all actually work. Could a democratic republic surrounded by enemies, deeply in debt—a new experiment in the world—thrive and survive, or would Benjamin Franklin’s dark hint—“A republic, if you can keep it”—prove all too apt. 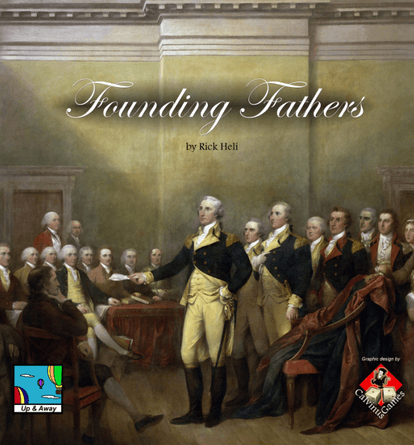 Politics year to year in the early American republic. Play begins with George Washington as president, with Vice President John Adams. Each player controls several statesmen as well as others who will appear, up through the arrival of Abraham...

Rick Heli’s Founding Fathers is a game inspired by The Republic of Rome , which transports many of the Avalon Hill classic’s mechanics to the early years of the United States. The players control groups of statesmen vying for offices in the executive branch and influence in Congress.

Our first game, here, saw a period of Conservative dominance, where a powerful Federalist party managed to pull together and dominate American politics for the first sixty-odd years.

For the second game, we are pulling out all the stops. We will be playing with the Founding Fathers base game, which covers the period up to the American Civil War, along with its expansions (which add additional personalities, issues, and offices). We will also be adding in the expand-alone Founding Fathers: Civil War & Gilded Age, which takes the game through the Civil War to the end of the Great War.

Founding Fathers is (probably) best with six players. Current folks who have expressed interest are:

Play proceeds in four phases: the Issue Phase, the Treasury Phase, the Election Phase, and the People Phase

Issue Phase
During this phase, the President draws 4 issues that are facing the United States from the issues deck. He appoints officers from the Statesmen of his party to various offices, such as Secretary of State, Secretary of the Treasury, and Special Envoy to help resolve the issues. Most issues also require Congressional approval, based on player controlled votes. The President may also propose or repeal taxes and tariffs, subject to a Congressional vote.

Treasury Phase
During this phase, the Secretary of the Treasury (or in this case, the moderator) adjusts the government’s reserves, adds interest, in the event that the government is in debt, and if the government is sufficiently in debt, rolls to see if the game ends due to economic collapse.

Election Phase
During this phase, the most popular Statesman from each party runs for President. After choosing a running mate, the two parties face off, placing markers in various states to determine control of the states’ electoral votes. At the beginning of the game, the statesman who gets the most votes becomes President, regardless of whether they were a Presidential candidate or a Vice Presidential candidate, and the second place Statesman becomes Vice President. Once the Twelfth Amendment comes into effect, things change.

If one party is exceptionally popular, there can be a single party dominance election, which works a little differently. We’ll cross that bridge when we get to it.

People Phase
In this phase, the players receive influence and draft action cards. The players then each take a turn doing one of the following: invest in newspapers to increase public support for their party, whip up public support for their party by making speeches, or make speeches to enhance their personal popularity. Once everyone has taken a turn, a final turn is up for grabs based on an auction where the players bid influence (from their statesmen and faction supply).

Game End: The game ends when the last issue card is drawn, when an economic collapse occurs, or when rising tensions push the country into civil war.

Victory: Players score victory points based on the popularity of their Statesmen when they die, retire, or when the game ends, whichever happens first. If the game ends by economic collapse or civil war, the players must subtract their influence and number of Congressional votes controlled from their final score.

For those who want to follow along with the rules at home, they are available here, somewhat down the page in the “downloads” section: https://www.thegamecrafter.com/games/founding-fathers

[Reserved for additional rules re expansion]

I’m just checking in to let you all know that I’m very excited for this to start up! I’ve not used this forum too often but if anyone ever wants to contact me my inbox is open.

If we wanted to make this more like face to face, and possibly more entertaining for spectators, we could say all negotiating has to be done in-thread, but that’s up to y’all.

I also think we should consider using the random war outcome rules, and maybe appointing the offices at the beginning of the term.

@HerbertHoover Welcome to the forums!

@Cuthbert Secret deals in smoke filled back rooms is what politics is all about. No way I want all that out in the open. Will have to read up on those other rules to have an opinion. I know we mentioned the two time loser rule as well, but I’ve looked through the expansion rules at least three times and can’t find it anywhere.

I believe it’s in Ladies and Orators

OK, thanks. Will check there.

Indeed. The ladies and orators rules are on cards in the new deck.

I’ll be dropping out of this one. Best of luck to whoever takes my place.

Indeed. The ladies and orators rules are on cards in the new deck.

OK, finally found it. Thanks.

Sorry to see @Panzeh drop out. Now we need two more players to make this happen.

Secret deals in smoke filled back rooms is what politics is all about. No way I want all that out in the open.

Diplomacy. Empires in Arms. Republic of Rome. Sure.

Gents, I am bowing out of this one too. Good luck to anyone who wants my seat. Thanks for all the hard work, @CF_Kane. You made this game easily accessible, and fun, all with a sense of humor.

Sure as long as everyone was OK with it. Might want to impose a time limit in face to face though.

Since there are now only three of us I guess we’ll have to put this on hold for now. Maybe there will be more interest in the future.

As an aside, @Navaronegun had our own private thread with over 250 posts where we were strategizing as a team. That was in addition to the two private threads we had, first with the two of us and @Cuthbert (~400 posts) and then with the two of us and @Panzeh (~300 posts) after @Cuthbert jumped ship. We would have not accomplished all we did if that had all been public.

Did you guys know this is on yucata.de now?

I’d be interested in trying it out over there with other people.

That is the other Founding Fathers game, sadly.