I’d argue you’re as nearly as blind in both situations and that, to me, they account for the same sort of planning.
As the game progress, I tend to" forge" the map in the shape I want it to be based on the techs I am likely to pick. Maybe I am playing it wrong, but that’s how I do it!
Of course, this is all thrown to the flush with the random incredible toy you can sometimes get at those ruins of stations.

Also, I rather liked the twists in the campaign and I wish there was more to it…

I’ll revise and somewhat retract my “long-term planning” statement, on a couple points:

Don’t these points apply to all games in which you’re exploring out into a fog of war on a randomized map? From MOO to Civ to Age of Wonder? Or at least your overall complaint that you can’t make long-term plans when you play Slipways?

You can’t make long-term plans until you know what resources you have and what situations you’re going to face, which you won’t know until you explore the world and start exploiting it. You’re making a valid point, but I don’t understand why you’re singling out Slipways.

This might not be a good idea, but I thought a prosperous world in year 2 would at least be amusing: 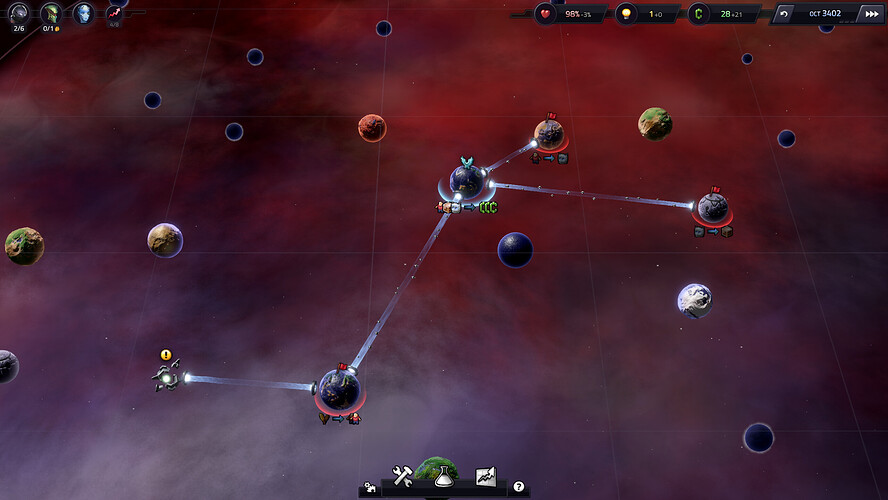 I never thought of this game as a commentary on capitalism exploiting countries with natural ressources! “It’s easy to be happy”.

RPS review that does a good job of explaining the game. I like the take on efficiency vs risk management.

which had a link to a very helpful Steam guide:

Steam Community :: Guide :: How To Slipways!

Having trouble getting started? Here are a few tips from someone who was addicted to the demo and beta....

I learned two things:
Holding Alt or middle mouse button over a planet shows the slipways that can connect to that planet. Very helpful

I’m trying to do a lot more planning ahead to devise virtuous cycles of interlocking planets. There is a lot more strategy involved than it first appears. I’ve been mostly ignoring inventions while I understand how to set up the resource loops.

Holding Alt or middle mouse button over a planet shows the slipways that can connect to that planet. Very helpful

Even better, you can do that when placing a building. A lifesaver when looking for a pixel perfect placement.

Oh I had forgotten this from the tutorial, as I was resorting to just undoing over and over till I got it right. Thanks for the very helpful reminder!

True, but it also reduces the maximum diameter. Like everything else in the game, it’s a trade off. In fact, I went back to the default.

I will have to check that out. From what I could tell on steam forums the stable probe locks to maximum and dev didn’t disagree

The alt-key method to find possible slipways helped me quickly boost happiness from 59 to mid 70’s by optimizing routes I had missed. I’m still ascending the learning curve.

Thank you so much! I hate hate hate the pulsating probes “minigame”. I thought for sure (1) I was imagining that the timing of when I released the mouse button made a difference and then (2) that it was a bug. But instead it’s (3) the only flaw in an otherwise perfect game. ;)

True, but it also reduces the maximum diameter. Like everything else in the game, it’s a trade off. In fact, I went back to the default.

Don’t these points apply to all games in which you’re exploring out into a fog of war on a randomized map? From MOO to Civ to Age of Wonder? Or at least your overall complaint that you can’t make long-term plans when you play Slipways?

You can’t make long-term plans until you know what resources you have and what situations you’re going to face, which you won’t know until you explore the world and start exploiting it. You’re making a valid point, but I don’t understand why you’re singling out Slipways.

In Civ4, if I discover I’m up next to Montezuma, I’m going to shift my plans around to beeline archers or axemen or horsemen (depending on what resources the map looks likely to give me), whereas if I’m next to a builder, I might stick with my original plan to rush catapults+swordsmen for an early conquest or knights for a later one. (Or even go culture heavy if I feel like playing that way.) Similarly for AoW:Planetfall I might change when I’m going to build my doomstack (which means changing what it’s built out of, i.e. what mods I’m going to use) if I think I need an early war for a particularly juicy settlement or map structure or something. Those changes have ramifications throughout the rest of my strategy; if I settle the copper instead of looking for iron, the shape of my whole empire will change.

With Slipways, I just don’t get that feeling. I’ll acknowledge that going for the “inner peace” tech where you don’t need goods (forget the name, can’t find a manual or wiki to look it up…) feels very different from one where you go the energy route (solar, fusion, geothermal) and the “artifact trading” (people → goods on remnants(?)) route. And that’s a great strength of the game. And I love it because it gives me the same feel of strategic variety as I get in Civ4, and in such a small game! But it doesn’t feel like a strategy that I hatched in response to the situation on the ground.

The other point is that the strategies that I adopt in Civ4 and AoW have ramifications across many different game systems, which means that I really feel like I’m implementing them more thoroughly. It’s hard to describe what I mean by that but it’s satisfying when something comes together that took multiple different systems and stages to get working. (I guess this ties with the other point from my earlier wall of text.)

It’s fair to say the root causes here are that (1) I’m not good enough at the game to react to the situation on the ground effectively, and (2) because Slipways is so well-focused, it doesn’t send me off on goose chases through troop equipment screens and the like.

None of this is a knock on the game at all. I’m just trying to express why I feel like someone coming into this with a “hey this is going to be like MOO but without combat” expectation is going to be doing a double take.

(Also, I really like the fact that there’s no hint of violence here. Even in many city builders they just throw in pirates or an invading army, just because, it seems. It’s refreshing!)

I do think it’s kinda pushing this to say this is a little bit cut down 4x game, it’s more like a very jumped up game that’s very specifically Star Ruler 2’s empire development, with a little extra.

The traditional 4x game features a bunch of systems that are vaguely connected, a diplomacy system, a city builder, a strategic combat, a tactical combat system, a research tech tree, and they kinda interlink, and the specifics of the 4x are often how much depth each of these have, whereas slipways is basically one thing with another(tech) bolted on a little.

Still, it’s an incredible game and I think it’s kinda not doing it service to call it a simple puzzle game. I also think, for example, it’s very reductive to call games like Unity of Command or Panzercorps puzzle games just because they don’t have all the elements of a 4x game but rather focus on one thing(operational strategy).

I am on the other side and I think it’s doing a disservice to the too few real puzzle games that a bunch of mindless clicking toys are stealing their identity!
I love genres boundaries discussions.

I really like the fact that there’s no hint of violence here.

There may be, as in that screenshots jsnell posted, with a bunch of worlds suffering to provide to others. But it works against the end goal and I think it’s beautiful and utopian that the score is so tied to the overall happiness of your empire.

Property is theft! No gods, no masters!

In seriousness, though, that is a valid point. If you are partial to the idea that late-stage capitalism exploitation of workers is violence (which I am, somewhat), then Slipways completely elides that. Similarly the idea that there is open, empty land ripe for settling certainly has a problematic history, and is taken literally (though certainly not maliciously) in many city/empire building games, though it’s even more abstracted in this case where you just have an “earth-like” world that is apparently otherwise empty (in contrast to explicitly abandoned or uninhabitable ones).

I’ve enjoyed this game but it encouraged me to go back and start playing Star Ruler 2 again. What a gem. Rising stars mod here. Steam Workshop::Rising Stars

Reporting back–I experimented and AFAICT “stable probes” uses the maximum probe diameter. So no worries there.

I’d been struggling at Challenging with around 15k scores, so was pretty happy to jump from 5 to 10 stars: 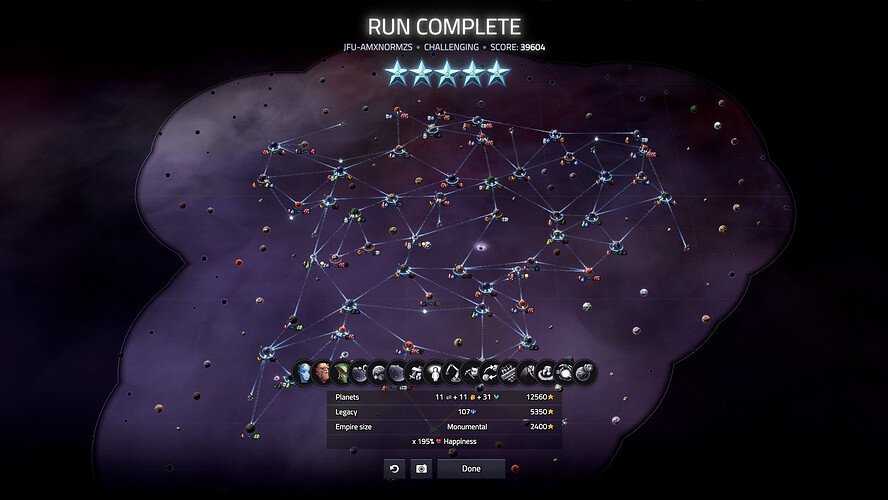 The mistake I’d been making was to build econ for too long. Money is basically worthless after the first 10 years, after which you’ll never run out. The only sensible option is to start investing it in science even before the economy becomes self-sustaining. With Explorers (money for exploring) and Quantum Sensors (the massive exploration radius) you can sustain a huge deficit spending, so I was able to build a 3 science lab from a nice group of 4 planets, and then upgrade it to 5 science with the 5th planet.

The tech snowballed quickly, so I got Spacetime Eversion incredibly early (I think it was around year 17?). The combination of Matter Transposition for getting just the right planet into every location + Spacetime Eversion for getting basically infinite actions was incredibly abusive. If I’d realized right from the start how it would work, I would have made sure to leave a few more gaps in the middle of the empire to swap useful planets into from the perimeter.

Is there an endgame or is this more like a puzzle game where you just try to get the highest score you can before the map is exhausted?